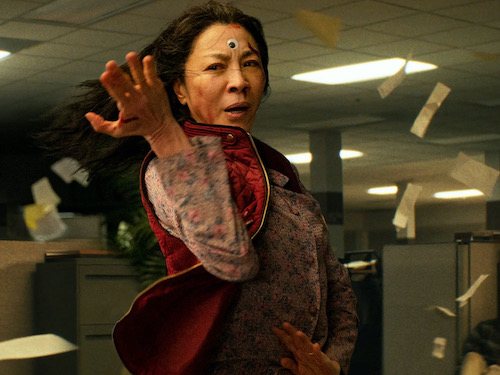 Michelle Yeoh portrays a woman fighting a multi-dimensional battle in “Everything Everywhere All at Once.” (Photo provided by A24)

The Indiana Film Journalists Association selected “Everything Everywhere All at Once” as 2022’s best film, one of four honors collected by the fantasy/comedy/drama in the group’s year-end poll.

The critics group assigned its original vision award to “Everything Everywhere All at Once,” the story of a woman fighting an existential battle in a multiverse context. The movie directed by Dan Kwan and Daniel Scheinert also was recognized in the categories of best supporting performance (Ke Huy Quan) and best editing (Paul Rogers).

Established in 2009, the Indiana Film Journalists Association is dedicated to promoting the art of film criticism in the Hoosier state and supporting Indiana’s film industry. It also presents annual awards for the year in film.

Winners in 17 categories were named for 2022, plus the Edward Johnson-Ott Hoosier Award that recognizes work by artists with roots in Indiana or a film that depicts Indiana locales and stories.

Joshua Hull won this year’s Edward Johnson-Ott Hoosier Award for co-writing the screenplay of “Glorious,” a horror film set in the men’s room of an interstate rest stop.

The critics group issued the following statement about the work of Hull, who grew up in Pendleton: “Joshua Hull is the rare Hoosier filmmaker who proved you don’t have to leave Indiana to make movies. He’s seen his career rise steadily as a writer, director and producer with local productions like ‘Chopping Block.’ With the release of ‘Glorious,’ Hull has broken out with mainstream success in a highly inventive film that blurs the line between horror, fantasy and character study. The IFJA looks forward eagerly to his next efforts.”

Best film
Winner: “Everything Everywhere All at Once”
Runner-up: “RRR”

Other best film finalists (listed alphabetically)
“After Yang”
“The Banshees of Inisherin”
“Decision to Leave”
“Glass Onion: A Knives Out Mystery”
“Marcel the Shell with Shoes On”
“Tár”
“Top Gun: Maverick”
“Women Talking”

Best supporting performance
Winner: Ke Huy Quan, “Everything Everywhere All at Once”
Runner-up: Brendan Gleeson, “The Banshees of Inisherin”

Best editing
Winner: Paul Rogers, “Everything Everywhere All at Once”
Runner-up: Kim Sang-bum, “Decision to Leave”

Original vision award
Winner: “Everything Everywhere All at Once”
Runner-up: “Marcel the Shell With Shoes On”