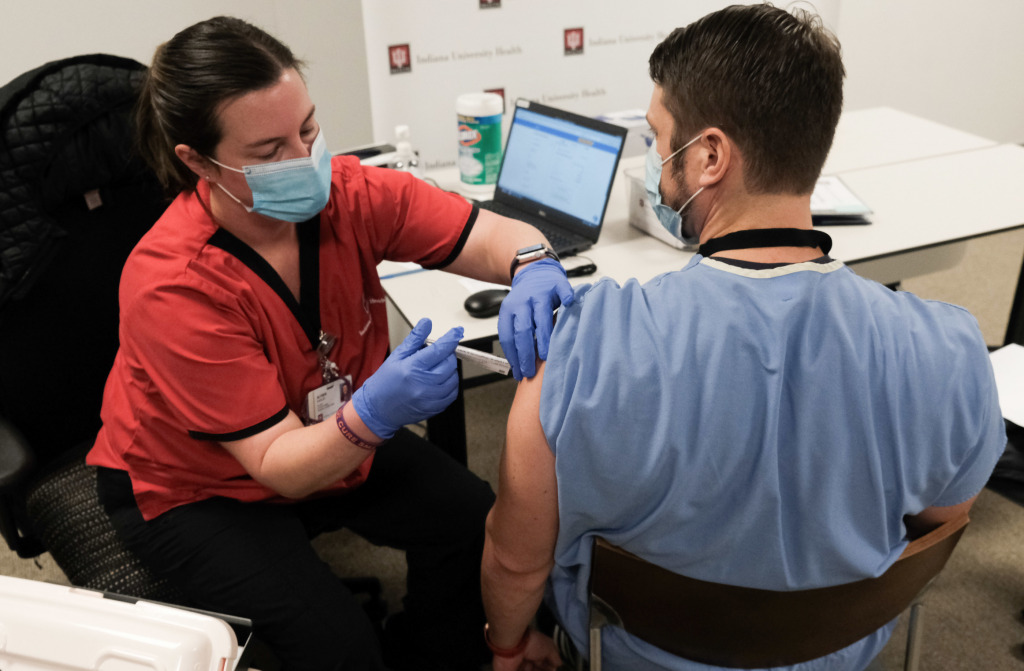 Indiana health officials say they will pause using the single-dose Johnson & Johnson vaccine for COVID-19 at all clinics that use it, following reports of potentially dangerous blood clots, and instead use the two-dose Moderna vaccine.

The Indiana Department of Health said it will be sending the Moderna vaccine to the Indianapolis Motor Speedway—which had been set to begin a six-day mass vaccination clinic at 9 a.m. Tuesday using the J&J shot—to avoid interruptions.

The state said it has not received official notification of a directive to pause, but is doing so “out of an abundance of caution.”

Text messages about the situation started going out shortly before 9 a.m. to thousands of Hoosiers scheduled to get the J&J vaccine at the Speedway and other clinics across the state.

Dr. Lindsay Weaver, chief medical officer for the state health department, said it was too early to say how long the pause would last, and whether it would cause a shortage or disruption in vaccines across Indiana.

“Of course, we need more vaccine here in Indiana,” she said at a hastily called press conference at the Speedway. “So any time that we’re seeing less or don’t have the ability to give as much as we would like, then of course that may hurt our vaccine effort.”

As of Monday, Indiana had administered 125,650 doses of the J&J vaccine, and more than 3.3 million doses of Moderna and Pfizer vaccines.

People getting the Moderna vaccine at the Speedway and other clinics will need to schedule a follow-up appointment for a second shot in 28 days. Weaver said the state is still trying to determine where the second doses will be administered.

She said it was important for people to get vaccinated with whatever brand of vaccine is available, as COVID-19 cases have begun rising again in Indiana in recent weeks.

“We are watching for an increase in hospitalizations,” she said. “We know that the variants are here and across the entire country.”

Earlier Tuesday, the Centers for Disease Control and Prevention and the Food and Drug Administration said they were investigating clots in six women that occurred six to 13 days after vaccination. The clots were observed in the sinuses of the brain along with reduced platelet counts—making the usual treatment for blood clots, the blood thinner heparin, potentially “dangerous.”

The reports appear similar to a rare, unusual type of clotting disorder that European authorities say is possibly linked to another COVID-19 vaccine not yet cleared in the U.S., from AstraZeneca.

More than 6.8 million doses of the J&J vaccine have been administered in the United States, the vast majority with no or mild side effects.

U.S. federal distribution channels, including mass vaccination sites, will pause the use of the J&J shot, and states and other providers are expected to follow. The other two authorized vaccines, from Moderna and Pfizer, make up the vast share of COVID-19 shots administered in the U.S. and are not affected by the pause.

“I’d like to stress these events appear to be extremely rare. However COVID-19 vaccine safety is a top priority,” FDA Acting Commissioner Janet Woodcock said at a news conference.

Officials said they believed the recommended pause would be a matter of days.

A CDC committee will meet Wednesday to discuss the cases and the FDA has also launched an investigation into the cause of the clots and low platelet counts.

Jeff Zients, the White House COVID-19 response coordinator, said 28 million doses of the Pfizer and Moderna vaccines will be available for states this week, more than enough to keep up the nation’s pace of 3 million shots a day despite the J&J pause.

The J&J vaccine received emergency use authorization from the FDA in late February with great fanfare, with hopes that its single-dose and relatively simple storage requirements would speed vaccinations across the country. Yet the shot only makes up a small fraction of the doses administered in the U.S. as J&J has been plagued by production delays and manufacturing errors at the Baltimore plant of a contractor.

Last week the drugmaker took over the facility to scale up production in hopes of meeting its commitment to the U.S. government of providing about 100 million doses by the end of May.

Only about 9 million of the company’s doses have been delivered to states and are awaiting administration, according to CDC data.

Until now concern about the unusual blood clots has centered on the vaccine from AstraZeneca. Last week, European regulators said they found a possible link between the shots and a very rare type of blood clot that occurs together with low blood platelets, one that seems to occur more in younger people.

The European Medicines Agency stressed that the benefits of receiving the vaccine outweigh the risks for most people. But several countries have imposed limits on who can receive the vaccine; Britain recommended that people under 30 be offered alternatives.

The Associated Press contributed this report.