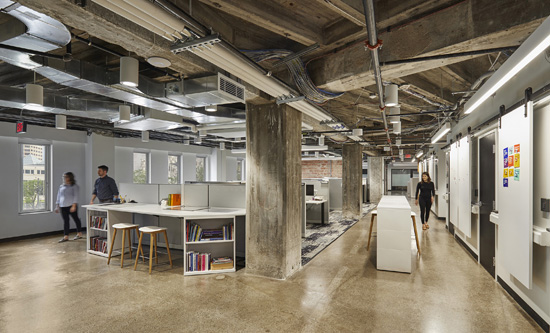 This year’s AIA Indiana Design Awards were dominated by firms from Indianapolis.

The top two awards were taken by Indianapolis firms KRM Architecture and Haus-Architecture For Modern Lifestyles.

KRM won an Honor Award for new construction greater than $1 million for its design of the Indianapolis Public Library Michigan Road Branch in Indianapolis.

Haus received an Honor Award for new construction under $1 million for the design of Copperwood, a 4,300-square-foot, contemporary-style home

Haus also received a Merit Award for the renovation of a 1956 Mid-Century Modern home at 220 W. 81st St. in Indianapolis.

Indianapolis-based CSO Architects received two Merit Awards, including an honor for interior architecture project of more than $1 million for its design of IBJ Media Corp.’s new headquarters in the IPL Building on Monument Circle.

CSO received its other Merit Award for new construction of more than $1 million for its design of the Parkwood Amenity and Recreation Center at 550 E. 96th St. in Indianapolis.

Axis Architecture + Interiors of Indianapolis received a Citation Award for new construction of more than $1 million for its design of the Marietta building at 350 Massachusetts Ave.

Design Collaborative of Fort Wayne received a Citation Award in Adaptive Reuse for transforming a former Sears department store in Fort Wayne into an office space for Aptera.

The 2019 AIA Design Awards were judged by architects from Wisconsin.

AIA Indiana is the professional association that works to promote the design profession, provide educational opportunities for members and public seminars and events that showcase area design and the value of architects.