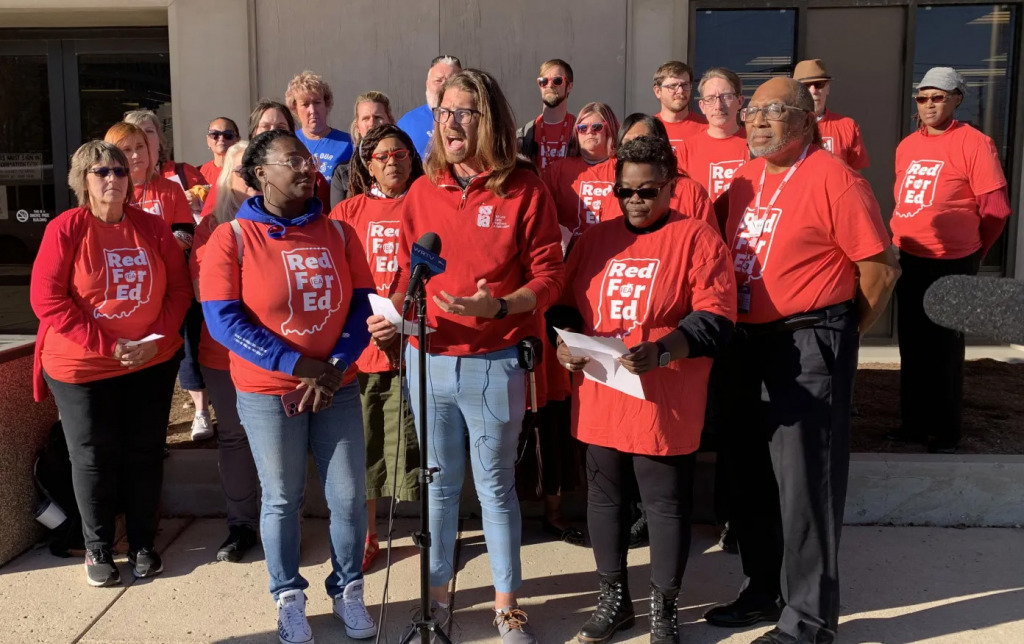 The Indianapolis Education Association is pushing Indianapolis Public Schools for more transparency around how it will relocate staff under the district’s Rebuilding Stronger reorganization, urging the district to also forbid closing schools from reopening as charter or innovation schools.

The list of demands from the union, outlined in a press conference before the Thursday school board meeting, is the latest in a litany of public responses, questions, and concerns about the district’s proposed overhaul.

The sweeping plan, which the board will vote on in November, is the district’s attempt to address dwindling enrollment at its traditional schools while also expanding specialized academic programs to more students of color.

The plan would close seven schools, three of which will merge with existing schools. The plan also reconfigures grades at 39 schools, largely shifting K-8 schools into K-5 and 6-8 schools while relocating students and staff throughout the district.

The seven buildings left empty could be ripe real estate for charter schools, which are allowed to buy or lease the buildings for $1 under state law. Innovation schools, a type of autonomous school within IPS, are most often run by charter operators.

But seven school sites were given different answers on the amount of the bonuses and when they would be distributed in meetings after the plan’s unveiling on Sep. 13.

“If the district is going through lots of changes — which we understand, because change is hard and there’s lots of moving pieces here — the staff deserve to know what types of financial incentives are going to be available before making those really tough decisions,” said IEA Vice President Jack Hesser.

The union also called for transparency in the staff relocation process and a pause in a displacement survey sent to staff, arguing that the questions were vague. One question, teachers noted, simply asked if they supported the plan.

“It feels like a ‘gotcha’ question,” Hesser said. “Most people are just going to click ‘yes’ regardless of how they feel because they don’t want it held against them.”

Teachers also voiced concern about staff from schools with specialized programs  — such as Center for Inquiry or Montessori schools — displacing existing staff as more schools adopt such academic programs.

The union also called for the district to provide translation services to families who do not speak English at the many community meetings the district is hosting to explain the plan to the public.

The school board will consider a draft budget for implementing the plan — as well as an updated plan — in October, before a final vote in November. The district is holding community meetings throughout the district before the vote.