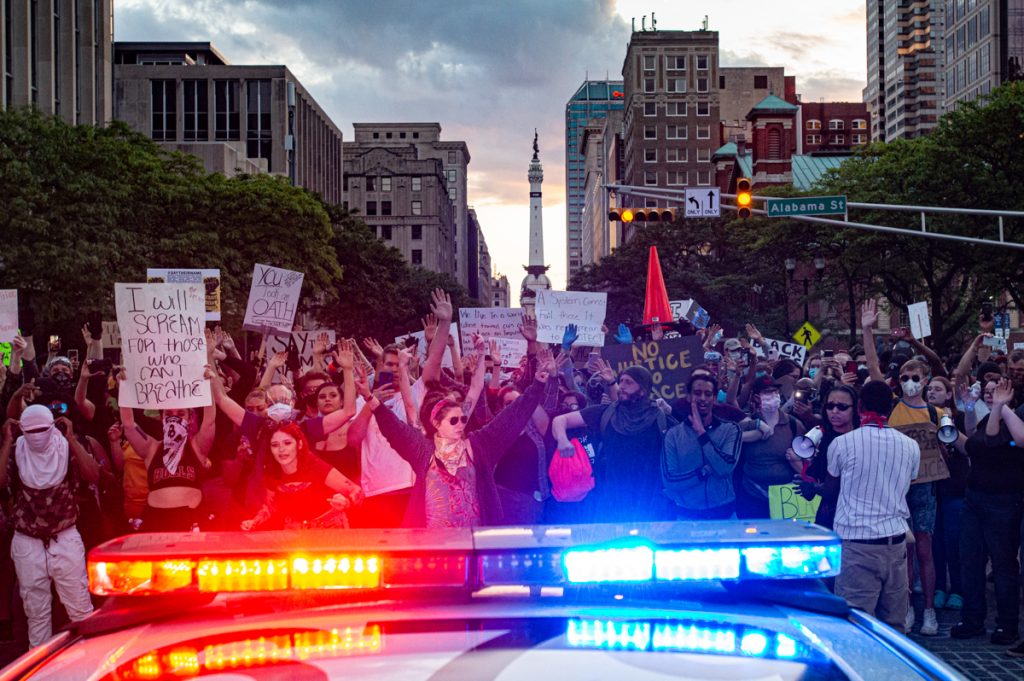 Protesters face off with police on Market Street in Indianapolis. (IBJ photo/Mickey Shuey)

The governors of at least 12 states have called up National Guard troops to help quell the protests that have ravaged many major American cities, but Gov. Eric Holcomb so far has been mum on the possibility of doing so in Indiana.

As of Sunday morning, Holcomb’s office had not responded to IBJ’s requests for information about the possibility of calling up troops, even after a night of violence, gunshots and extensive property damage in downtown Indianapolis.

At a press conference late Sunday morning, Indianapolis Mayor Joe Hogsett said he didn’t see a need to deploy the National Guard in the city. Hogsett did announce that he would impose an 8 p.m. curfew on Sunday night.

Nearly 1,400 people have been arrested across the country, according to an Associated Press tally Saturday. The real tally is probably higher, as the protests, sparked by the death of a black man in police custody last week in Minneapolis, continued through the night.

Armed National Guard soldiers patrolled the streets of Los Angeles early Sunday as the city began cleaning up after a night of violence that saw demonstrators clash repeatedly with officers, torch police vehicles and pillage businesses.

Garcetti said the Guard members who arrived early Sunday were summoned “to support our local response to maintain peace and safety on the streets of our city.”

In Georgia, Gov. Brian Kemp has authorized up to 3,000 National Guard troops to be deployed to cities across the state to respond if needed. Guard soldiers had helped enforce a 9 p.m. curfew Saturday in Atlanta, where violence has marred otherwise peaceful protests since Friday.

In Washington, the National Guard was deployed outside the White House on Saturday, where chanting crowds taunted law enforcement officers.

Dressed in camouflage and holding shields, the troops stood in a tight line a few yards from the crowd, preventing them from pushing forward. President Donald Trump, who spent much of Saturday in Florida for the SpaceX rocket launch, landed on the lawn in the presidential helicopter at dusk and went inside without speaking to journalists.

Back in Minneapolis, the city where the protests began, police, state troopers and National Guard members moved in soon after an 8 p.m. curfew took effect on Saturday to break up protests, firing tear gas and rubber bullets to clear streets outside a police precinct and elsewhere.

The show of force came after three days when police largely avoided engaging protesters, and after the state poured in more than 4,000 National Guard troops to Minneapolis and said the number would soon rise to nearly 11,000.

“The situation in Minneapolis is no longer in any way about the murder of George Floyd,” said Gov. Tim Walz, who also said local forces had been overmatched the previous day. “It is about attacking civil society, instilling fear and disrupting our great cities.”