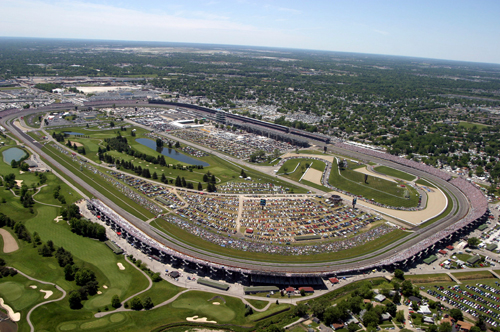 The Indianapolis 500 will move to Aug. 23 due to the coronavirus pandemic, the Indianapolis Motor Speedway and IndyCar announced Thursday, marking the first time the historic race has ever run in a month other than May.

The 104th running of the race will still air live on NBC, with a time for the race announced letter.

The GMR Grand Prix—typically run as part of May’s Indy 500 festivities—will move to July 4 on the IMS road course. It will run the day before the Brickyard 400, a NASCAR race that is running on the weekend of Independence Day for the first time this year.

“The month of May at the Indianapolis Motor Speedway is my favorite time of year, and like our fans, I am disappointed that we have had to reschedule the Indianapolis 500,” IMS owner Roger Penske said in a statement.

“However, the health and safety of our event participants and spectators is our top priority, and we believe that postponing the event is the responsible decision with the conditions and restrictions we are facing,” he said. “We will continue to focus on ways we can enhance the customer experience in the months ahead, and I’m confident we will welcome fans with a transformed facility and a global spectacle when we run the world’s greatest race.”

The Indianapolis 500 was originally scheduled for May 24, in its traditional spot on the calendar during Memorial Day weekend. The Grand Prix was scheduled to be run on May 9.

The Indy 500’s original date was outside the time periods during which state and federal authorities have said public gatherings are prohibited. But at least some of those restrictions are expected to be extended.

“I 110% support the decision to postpone it,” the governor said. “I’m just tickled we’re still going to have it—and we will have it. We’ll welcome the world back to the state of Indiana at that time.”

Canceling the race would have been a huge financial hit for the speedway, as well as IndyCar teams and the already suffering hospitality industry in Indianapolis.

Including ticket, hospitality, concession, merchandise and television revenue, the Indianapolis 500 brings in north of $50 million for the Speedway and has long been considered the one life vest keeping the otherwise struggling IndyCar Series afloat. More than half of all sponsorship dollars flowing to teams is paid for exposure during the month of May at Indianapolis.

The Indianapolis 500 began in 1911 but did not run in 1917, 1918, and from 1941-45 because of World Wars I and II. Tony Hulman bought the neglected speedway after the second war and the Indy 500 returned on Memorial Day weekend in 1946 and has been scheduled for that weekend every year since.

Although weather disrupted other runnings of the prestigious race, it had never been outright rescheduled until now.

It was an inevitable decision but still had to be difficult for Penske, who completed his purchase of Indianapolis Motor Speedway and IndyCar in January and has already pumped millions into capital improvements to ready the historic venue for its first 500 under new ownership.

Penske had been eagerly anticipating the May 15 start to the IndyCar season, but was forced to suspend the series 48 hours before the scheduled opener when the coronavirus was declared a pandemic. Four races were initially scrapped and IndyCar said it would resume racing May 9 on the road course at Indianapolis. Long Beach and St. Pete both said they could not reschedule, but St. Pete could still find its way back to the calendar.

The Indy 500’s on-track action in August will begin at IMS with practice sessions on Wednesday and Thursday, Aug. 12-13, followed by Fast Friday practice Aug. 14. Race qualifying will be Aug. 14-15—both days broadcast by NBC.

The  public drivers’ meeting and full-field autograph session on Aug. 22 as part of Legends Day.