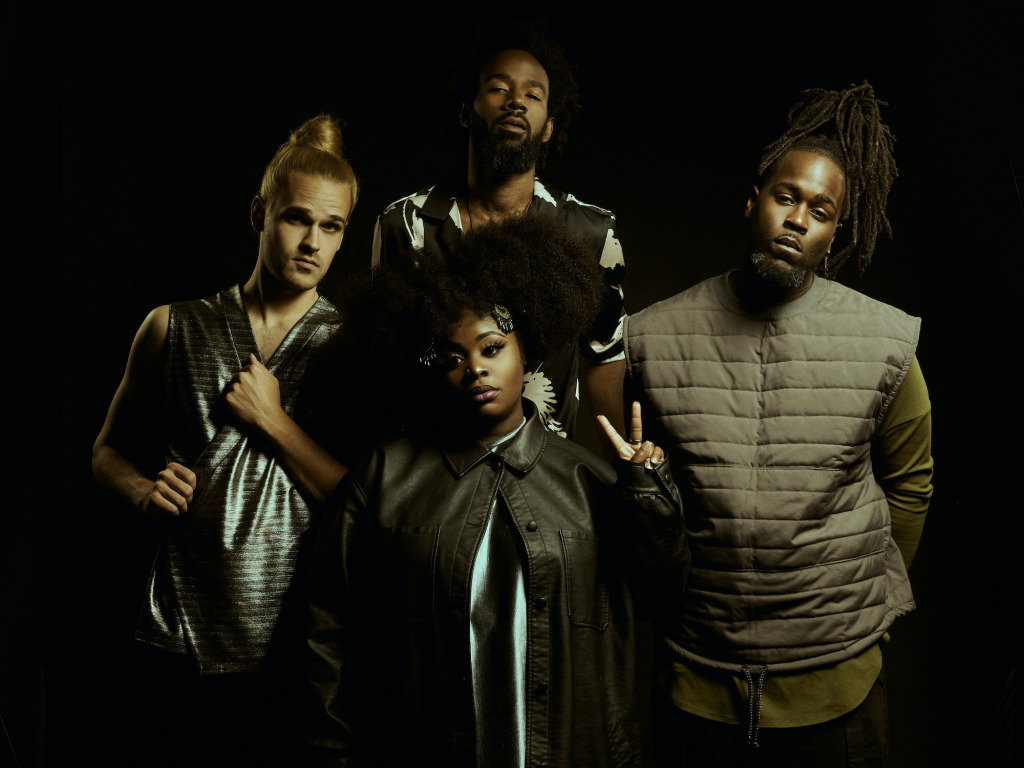 Tarriona "Tank" Ball, front, will perform with Tank and the Bangas Oct. 1 as part of Indy Jazz Fest. (Photo provided by Sacks & Co.)

As a senior transferring into Pike High School, Tarriona “Tank” Ball said it was easier to befriend freshmen students than people in her own grade.

“The freshmen were new, like me,” Ball said. “The seniors already had their friends and their cliques. So I actually bonded with the freshmen a lot.”

That’s a common anecdote of adolescence, but Ball wasn’t a typical transfer student.

In the fall of 2005, Ball and her family were displaced from their hometown of New Orleans by Hurricane Katrina—the historic storm that caused more than 1,800 deaths and $125 billion in damage.

Ball eventually returned to New Orleans, where she developed a hip-hop/soul/pop/gospel sound that made her a leader in modern music. On Oct. 1, she will perform with her band, Tank and the Bangas, as a headliner of Indy Jazz Fest in Garfield Park.

Nevertheless, Pike High can claim a sliver of what shaped Ball as a musician.

“I had never been in concert choir,” Ball said. “That was a big difference. I was used to being in gospel choir. It was great, though.”

Overall, she speaks highly of her time here. “Indianapolis treated my family very well and took care of us,” she said. “I was able to graduate from high school. It just opened me up to myself, so I’m really grateful for that.”

Tank and the Bangas are on tour to promote their third studio album, “Red Balloon,” which features guest appearances by Lalah Hathaway, Trombone Shorty, Big Freedia and Ahmir “Questlove” Thompson.

Hathaway, the daughter of music icon Donny Hathaway, also will perform Oct. 1 as part of the Indy Jazz Fest lineup at MacAllister Amphitheater.

“She has the most beautiful voice in the game,” Ball said of Hathaway. “She sounds like a lady version of her daddy, who I’m a big fan of. And besides the stage, she’s a beautiful spirit. She extremely youthful, even though she’s been around for a while. If you look at her catalog, she’s graced everybody’s records from Robert Glasper to Kendrick Lamar. And she’s so humble and cool about it.”

Tank and the Bangas collected a nomination in the Grammy category of best new artist following the release of 2019 album “Green Balloon.”

Despite increasing acclaim, Ball said she doesn’t feel as if she’s “made it.”

“I think it’s pretty amazing to create songs with people who you love, like Norah Jones or Mickey Hart or Robert Glasper or Lalah Hathaway,” she said. “Have Sheila E come into the studio? It feels amazing and you feel seen. But I still don’t exactly feel like I’m in the mix. … Maybe you just never see yourself the way people see you. We just see ourselves as people who are constantly working to, like Cicely Tyson said, reach this unreachable height. I think that’s why you keep working.”

And settings such as Indy Jazz Fest are perfect for picking up new fans, as well as an opportunity for Ball to acknowledge her band’s prowess.

“You get to catch people who never knew your name,” she said. “We’re some festival killers.”