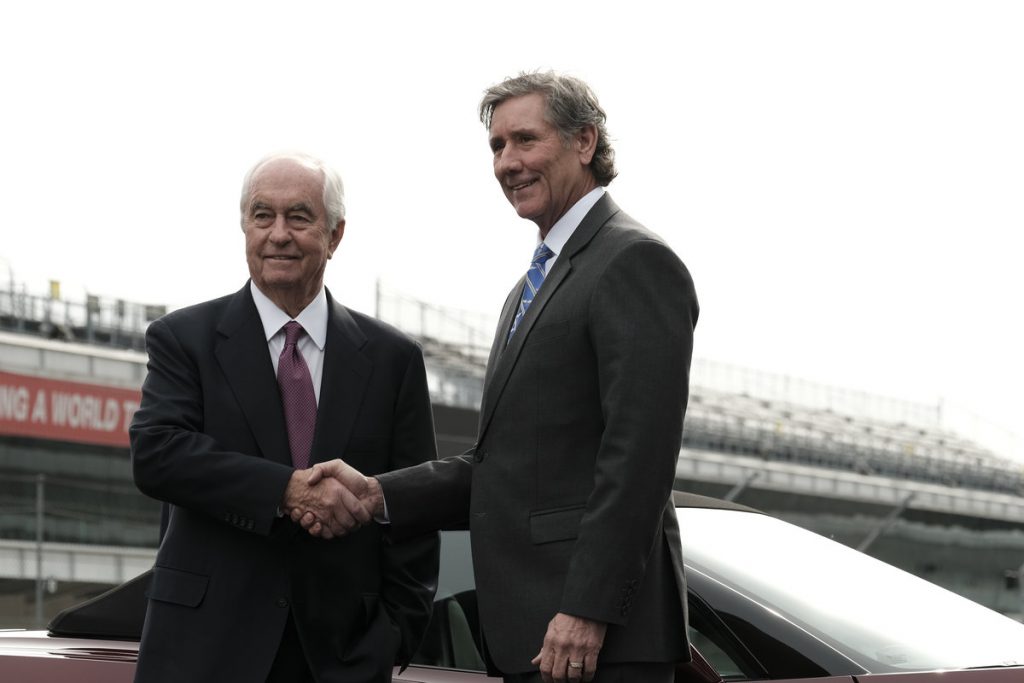 First was the $80 million sale of Hulman & Co.’s baking soda firm Clabber Girl in May, followed by a search for a buyer for the racing properties—the Indianapolis Motor Speedway and IndyCar racing series.

That painstaking, top-secret process culminated in Monday’s jaw-dropping announcement that the buyer would be Roger Penske, the billionaire businessman and racing enthusiast with a long history of excellence in motorsports.

The change of ownership will mark the end of an era. The hulking gray speedway had been in the Hulman family since Tony Hulman purchased it in 1945, and generations over seven decades since have poured everything into the speedway to uphold its status as a beloved slice of Americana.

The family decided the time had come to give it all up—though Hulman’s grandson, Tony George, who runs the showcase Indianapolis 500, was uneasy turning it over to a corporation or conglomerate that might very well ignore 110 years of history and tradition.

So George approached Penske at the Sept. 22 IndyCar season finale and asked if he was willing to discuss future “stewardship” of the speedway, the Indy 500 and the open-wheel series that has enjoyed a recent uptick in popularity.

Penske and Hulman & Co. officials declined to discuss details of the resulting transaction, though Mark Miles, CEO of Hulman & Co., confirmed to AP there was at least one interested party before Penske was sought out.

Three people with knowledge of the sale, speaking to AP on condition of anonymity because the details are intended to be private, said investment bank Allen & Co. was tasked with finding either a buyer or strategic partner and connected the family with Liberty Media, a media giant with ownership stakes in Formula One, the Atlanta Braves and the Sirius XM Group. So was Liberty Global, a communications company whose holdings include the Formula E racing series, according to the third person who spoke with AP.

Liberty Media was fairly unknown to George and he was uncomfortable, even as his three sisters encouraged the sale. As a family, they decided to see what Penske thought, and “The Captain” was certain he wanted the reins.

One person familiar with Liberty’s talks said the company balked at an initial asking price of $250 million and walked away from any potential deal when told there was another buyer in the game. There was a third group of investors who expressed interest, and just last week, a fourth individual tried to enter the bidding with a letter of credit for $250 million but was told by Allen & Co. it was too late.

“In the last few months it felt like the family was reaching a place where they were thinking about an exit, and then there was Roger and that was it,” Miles told AP. “It was hugely important to them that they found someone they knew they could entrust with what they think of as their baby.”

Industry insiders estimate Penske got it all for roughly $300 million, plus promised additional capital improvements to the speedway. Penske and Miles declined repeated requests from AP to discuss financials.

Penske began talks on the purchase the day after Josef Newgarden gave him a 15th IndyCar title and signed a nondisclosure agreement four days after the season final, Miles said. When the Hulman group arrived at Penske’s offices in Detroit for a clandestine meeting the following Saturday morning, Miles said Penske was already armed with “thousands of pages of due diligence.”

The groups usually met on Saturday mornings or Sunday evenings and Penske kept the deal under wraps in an industry where almost everything is an open secret. He deliberately had a news advisory sent at 8 a.m. on Monday in an effort to catch everyone by surprise.

As is his buttoned-up style, Penske controlled the news until he was ready, and he told AP it was his most furtive move since showing up at the 1994 Indianapolis 500 with a controversial pushrod Mercedes-Benz engine designed and developed for that single race.

Penske plans to keep the current executive team of both the speedway and IndyCar. He will put his own board in place, and Tony George will likely have a role in some fashion: Penske offered and George, who fought back tears at the news conference to discuss the sale, said he would accept.

Penske, 82, will likely include many of his top lieutenants from the Penske Corp. in the process, and his son, Greg, as well as Bud Denker, a longtime Penske executive, were among a small group that had a Tuesday morning breakfast with IMS leadership in a cafe near the speedway.

Penske wants more activity at the speedway and is open to bringing Formula One back to the track, as well as sports cars, a 24-hour endurance race and an extended deal with NASCAR. The stock car series first raced at The Brickyard in 1994 in a controversial break from tradition for the speedway. The race has lost its prestige and next year gets an awkward date on the July 4 weekend, just six weeks after the Indianapolis 500.

Penske has already had talks with NASCAR chairman Jim France and made it clear he wants NASCAR at the speedway. He likes the two races running less than two months apart on patriotic weekends.

“I think the combination of Memorial Day weekend and also July Fourth gives us the ability to support the men and women of the armed forces and first responders and we can take that to the next level,” Penske told AP. “We can really do something special with this.”

The IndyCar series itself is not a moneymaker and is propped by the Indy 500 and the speedway, which receives a sizeable payout from NASCAR’s television package. Penske has very firm goals for shoring up the security of the series and speedway.

“I want to keep the number of races very realistic, the balance of 15 to 17 is very key,” Penske told AP.

“We have to be relevant in the markets we are, it can’t just be just another race coming to town. We’ve always got ideas and are already kicking some things around.

“The series is not broken. We need to enhance it. We need more revenue. Not only for the league, but the teams, and we’ve got to make sure the product remains relevant to what people are seeing in their cars. All of these things need to be taken into consideration.”

3 thoughts on “Inside the blockbuster IMS, IndyCar sale”