David Simon is peeved that shares of Simon Property Group are depressed, trading 38% below the all-time high reached in July 2016, driven down by the growth of e-commerce and the resulting cloud over brick-and-mortar retail.

The frustration bubbled over when the company held its fourth-quarter earnings call Feb. 4. “Maybe going private is really what we should do,” the 58-year-old Simon said, referring to what he called “the ongoing overreaction to the negative sentiment.”

Six days later, in a conference call announcing Indianapolis-based Simon’s purchase of Michigan-based shopping center owner Taubman Centers Inc. for $3.6 billion, David Simon seemed surprised when an analyst asked why the company was paying entirely in cash, rather than using its stock as currency.

“Simply, we have no intention of issuing equity at this share price,” Simon said. “I mean … we think we are significantly undervalued.”

He said Simon Property Group’s ability to make such a substantial purchase without having to turn to a third party for financing and without suffering credit rating downgrades is a testament to the underappreciated strengths of the company.

For years, David Simon merely needed to highlight his company’s stock performance, and phenomenal record of dividend growth, to validate his savvy. From Simon Property’s December 1993 IPO until shares peaked in July 2016, the company’s stock, with dividends reinvested, returned 3,181%. That compared with a total return of 598% for the S&P 500.

But Simon shares have been in a malaise for 3-1/2 years—which has had the effect of shrinking the performance gap. The company’s total return since its IPO is now 2,431%, compared with 1,095% for the S&P 500.

Analysts don’t necessarily see an impetus for a sudden resurgence—in part because many of the redevelopment projects Simon has launched to replace former department store spaces with new uses—such as movie theaters, fitness centers and restaurants—won’t start boosting profit until 2021.

The investment firm Stifel said in a report that Simon has “an uninspiring 2020 outlook.” Jefferies was similarly cautious, calling the “2020 outlook weaker, but better than feared.”

Despite the headline-grabbing bankruptcies of some retailers, the company’s operating metrics—including occupancy and operating income—remain strong, David Simon said. 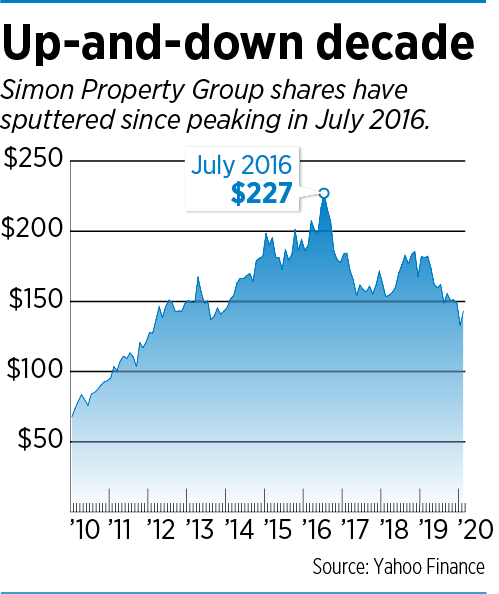 In fact, Simon’s malls and outlet centers posted sales per square foot of $693 in 2019, up nearly 5% from a year earlier—performance that “reinforces the benefits retailers experience from operating in high-traffic, highly productive, well-located real estate,” Simon said.

On the conference call, he said, “We remain undaunted. Throughout our history, we have zigged when others have zagged, and those moves have served us well. I’m extremely confident of where our business is and about the growth prospects for our company ahead.”

That supreme confidence carried over to the conference call to discuss the Taubman purchase.

And it takes Simon Property even further upscale—to the most resilient segment of the retail market. Taubman’s properties boasted 2019 sales per square foot of $876, 26% higher than Simon’s comparable figure.

The deal is set up as a joint venture, with the Taubman family, which owned 29% of Taubman Centers, retaining 20% of the Taubman operation, which will continue with existing management “in partnership with Simon.”

As part of Simon Property, Taubman “will be in a better position to invest in its properties and create the sort of innovative retail environments that drive traffic,” David Simon said on the conference call.

In short, he is casting the purchase as making already-strong Simon Property even stronger.

Yet the Taubman deal also is a reflection of the consolidation wave that often hits industries under pressure, analysts noted.

“There are not many opportunities to grow in the retail landscape,” Lindsay Dutch, an analyst at Bloomberg Intelligence, told Bloomberg News.

Simon is paying $52.50 a share for Taubman—a 51% premium to where the company’s shares closed the previous trading day. While that might sound lofty, historical perspective is in order.

Taubman CEO Bobby Taubman pointed out on the call that his family continues to have significant skin in the game, which he said reflects its continued confidence in retail real estate.