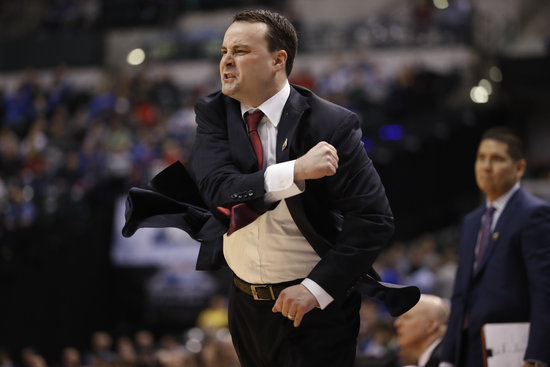 Archie Miller’s $10.3 million buyout was one of college basketball’s priciest.

Dolson fired Miller on Monday, armed with enough cash from private donations to cover the buyout and ready to answer a fan base angered by four straight mediocre seasons.

“Indiana basketball has a long, rich history of success that dates back generation,” Dolson said in a statement announcing the decision. “Our five national championships and 22 Big Ten titles make us one of the most accomplished programs in college basketball history. I have high expectations for our program, and we have not competed at a level within the conference or nationally that I believe we should.”

That was the case even before Miller arrived in Bloomington.

The Hoosiers haven’t been to the NCAA Tournament since 2016, haven’t been to the Elite Eight since 2002 and haven’t won a national championship since 1987 — the longest drought between titles in school history. Indiana has won just three Big Ten titles since 1993 and it’s now had five consecutive non-winning seasons in Big Ten play for the first time since 1911-19.

Miller was 67-58 with the Hoosiers and never made the NCAA Tournament though many believed Indiana would have received a bid in 2020 — had the tourney not been canceled because of the COVID-19 pandemic.

Those numbers put Miller in historically bad territory and were of great concern to Dolson, fans and alumni.

By making the decision before April 2022, Indiana was on the hook for the $10.3 million. If Dolson had waited another year, the cost would have dropped to $3.5 million for a university that has lost millions in revenue, cut salaries for coaches and administrators, and put department-wide furloughs in place.

Dolson knew how it would look to pay that much money to fire a coach. The private donations made the decision more palatable.

“In the days following the completion of our season in the Big Ten Men’s Basketball Tournament, I have spent a great deal of time evaluating our recruiting, student-athlete development, leadership development, and playing philosophy and strategy,” Dolson said. “That review, combined with the on-court results, ultimately led me to conclude that a change in leadership of our program is warranted at this time.”

But their arrivals didn’t correlate into consistent success.

Indiana went 19-16 and reached the NIT quarterfinals in 2018-19, Langford’s only season before he declared for the NBA draft. Jackson-Davis arrived the next season and led the Hoosiers to a 20-12 mark that had them on the cusp of an NCAA tourney breakthrough.

Leal played sparingly this past season as a freshman though Jackson-Davis appeared to have the Hoosiers in prime position for a tourney run as recently as mid-February. But the Hoosiers lost their final six games, capped by a Big Ten Tournament second-round loss to Rutgers.

Indiana finished 12-15 and out of postseason play for the third time under Miller.

Miller went 139-63 in six seasons at Dayton before taking the Indiana job, leading the Flyers to an NIT appearance in his first season as coach and NCAA Tournament appearances in each of his final four seasons including a run to the Elite Eight in 2013-14.

Miller’s brother, Sean, is the head coach at Arizona.