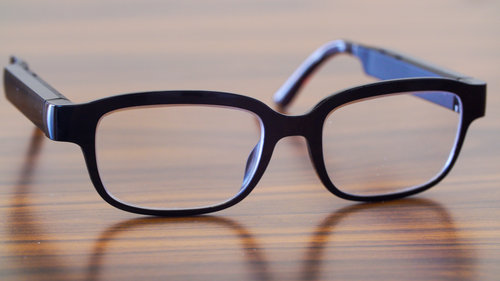 The Alexa-enabled Echo Frames weigh about twice as much as a traditional pair of glasses, and contain speakers, a microphone and battery. You charge it through a plug in one of the arms. (The Washington Post photo/Jonathan Baran)

What do you call it when there’s a little voice in your head only you can hear? A hallucination?

Amazon calls it progress. I’ve been living with its latest talking artificial intelligence product, called the Echo Frames, for two weeks. They’re glasses with tiny speakers and a microphone so you can have your own private conversations with Amazon’s Alexa virtual assistant everywhere you go.

This new version of Alexa is much more proactive about chatting – and it has driven me bananas. “WashPost,” chirped my glasses over my morning coffee to let me know about a news alert. “Outlook,” Alexa said minutes later, interrupting a real conversation with an offer to read my latest email. All day long, Alexa whispers notifications from apps into my ear: “Slack.” “Battery is at 20 percent.” “Outlook.” And more “Outlook.”

After two weeks with the $180 Echo Frames, I can report that you have to really love Alexa to want to wear it on your face. But the Frames offer a fascinating view of the state of the art in virtual assistants – and perhaps also the state of our dystopia. They’re one of Amazon’s first true “hearables”: wearable tech designed for hearing information, rather than seeing it.

Amazon chief executive Jeff Bezos owns The Washington Post, but I review all tech with the same critical eye.

To be clear, there’s no image projected inside the lenses of the Frames, as was the case with Google Glass. The Frames are Amazon’s audio-only baby step into the weird, possibly world-changing niche of face computers. Apple, Microsoft and all the big tech companies are also working on smart glasses.

To develop Alexa as a voice-first computer, Amazon’s whole approach has been like throwing spaghetti against the wall. Even the first Alexa product, the Echo speaker, was an experiment that Amazon initially only sold on a waiting list. After the Echo hit the big time as a virtual music DJ, Amazon has tried inserting microphones or its AI in lots of things – like cars and its FireTV streaming box and even toilets – without any knockout winners.

But the spaghetti is still flying in Seattle. Amazon introduced the Frames and a talking ring called the Loop in the fall of 2019, calling them experimental “Day 1 Editions” products. That means, at least at first, Amazon only sells them to customers on a waiting list it controls – and won’t let those customers leave product reviews on Amazon. After nine months, we’re overdue for an independent review.

I evaluate any out-there new hardware on two categories: How well does it do the thing it says it does? And does it fill a valuable function in my life?

The idea of Alexa glasses, as opposed to Alexa headphones (which Amazon also started selling last fall), is that they’re always with you. And as a constant connection to Alexa, the Frames just barely get the job done. The Echo Frames have tiny speakers pointing toward your ears, so only you are supposed to hear Alexa, phone calls or music. People around you won’t notice it unless you crank up the volume to near-max.

But having Alexa as a constant companion did complicate interaction with non-virtual people. From afar, you look like you’re talking to yourself. Up close, Alexa isn’t smart enough to know when you’re speaking with another human, so sometimes it interrupted with its random chirps. (Just try explaining, “Oh, sorry, my glasses are talking to me right now.”) And I live in fear of someone nearby mentioning the name of “Alexa” and inadvertently activating it. (If you remember, you can deactivate the microphone by double tapping a button.)

Taking calls on the Frames was fine, though twice I accidentally hung up on callers by brushing one of the touch-sensitive arms of my spectacles.

Other companies like Bose also have glasses that serve as speakers and have gotten decent reviews. Amazon’s Frames sound very tinny to me. At 1.2 ounces, the Frames are twice the weight of my regular glasses, though bearable. And as far as style goes, I’d call the thick black plastic Frames geek chic. (You buy regular prescription lenses for the Frames separately.)

My bigger technical problem has been keeping them running. The Frames battery has never really made it through the day – they conk out after three hours of constant music streaming at 60% volume.

The Frames get their Internet connection from your smartphone over Bluetooth, which sometimes flakes out, leaving Alexa to yelp that it is disconnected. It also means your phone always has to be nearby, which isn’t always the case for me at home. More to the point: If you have to carry your phone, you already have Siri or Google Assistant at easy access.

But say you’re in the Alexa tribe, which many voice assistant fans are. What do you get out of having Alexa always around? Amazon wouldn’t let me speak with a Frames product manager about the big idea. But it’s clear Amazon, which no longer makes a smartphone, wants to make Alexa mobile so we’ll use it more – and, of course, so it can gather more data about our lives.

The Frames did help with the occasional need to answer trivia or add to my shopping list on the go. It offered location-specific information, though didn’t demonstrate much knowledge of the taco options in San Francisco. (It recommended free-taco Friday at Long John Silver’s.)

I was able to multitask while cooking. But after the novelty wore off, I just didn’t find that many uses for Alexa on the go. Certainly pandemic life keeping me at home didn’t help: Who needs voice-activated glasses in a house full of smart speakers?

What’s really novel – and maddening – about the Frames is that Alexa can talk to you without your prompting. When you get a new message on your phone, Alexa will read it aloud. Same goes for updates and almost any alert you can get from a phone app. (For now, the app alert function only works with Android phones and only if you activate it.)

Hearing things is less intrusive than having to look at another screen, but all those Frames app-alert whispers quickly got old. It improved when I learned how to use the Frames’ “VIP” filtering tool that lets you be more selective about alerts – swipe on the leg of the Frames to accept an alert, tap once to stop receiving them. But it’s a rough filter.

Being proactive is Amazon’s next big idea for Alexa. In a 2019 interview with the MIT Technology Review, Alexa’s head scientist Rohit Prasad said that Amazon wants Alexa to move away from waiting to respond to requests and toward anticipating what you want – and even orchestrate your life.

Perhaps the Frames are destined for the workplace? I could imagine Amazon equipping warehouse workers with them to get them picking and packing instructions faster than continuing to look down at a screen.

But for most of us, Amazon hasn’t brought much new to the table. The Apple Watch had a similar problem just echoing phone alerts until we learned that its killer app was fitness and health.

If you buy the Echo Frames today, you’ll mostly be helping Amazon figure out the evolution of Alexa, but really, Amazon ought to be paying you for that.