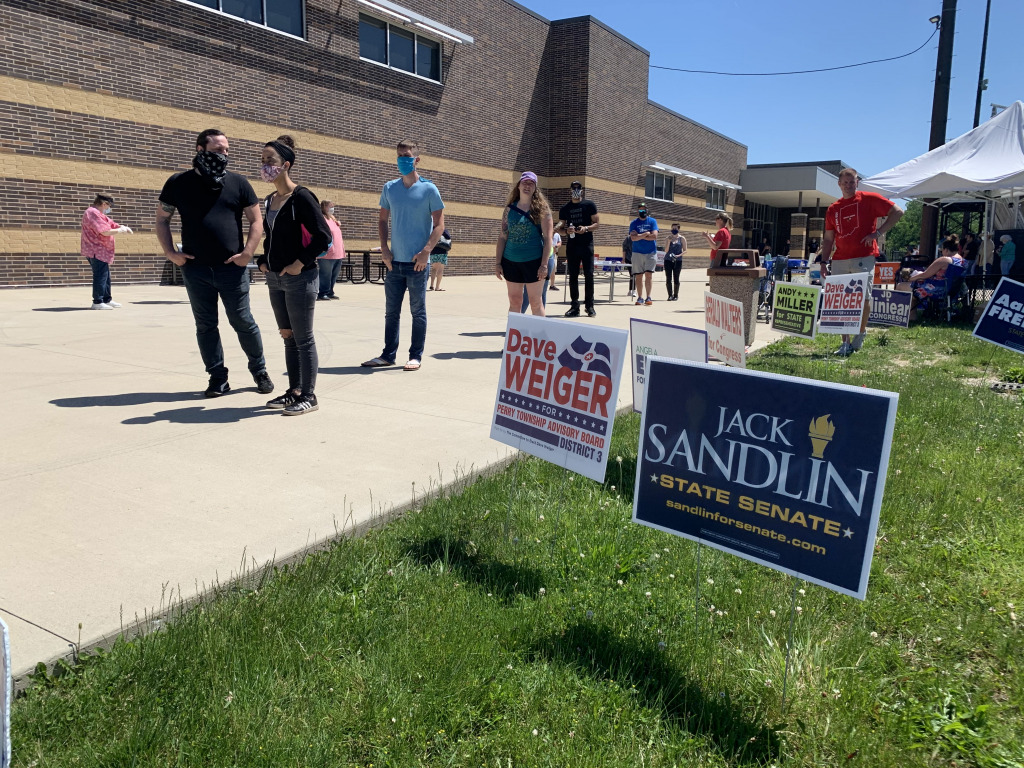 Voters wait in line to vote on June 2 at a polling place in Beech Grove. (IBJ photo/Lesley Weidenbener)

A federal judge has blocked a 2019 Indiana law restricting who may seek to extend polling-place hours due to conditions that prevent voters from casting a ballot.

Under the standing amendment, “[o]nly a county election board has standing in an Indiana court or with any other state governmental entity to file an action or petition to request the extension of the hour for closing the polls by the court or entity,” Young wrote.

“The Standing Amendment prevents any entity other than a unanimous county election board from ‘fil[ing] an action or petition’ in state court ‘to request the extension of the hour for closing the polls’ when there are unforeseen barriers to casting a ballot. This burdens the right to vote because when voters face disenfranchising conditions at their polling place, the Standing Amendment can deny them an opportunity to vindicate their right to vote by seeking relief in an Indiana court,” the judge found.

Young cited the example of a voter who plans to vote after leaving work at 5 p.m. “When she arrives at her polling location, she is told she can’t vote right now because they ran out of ballots. If she is unable to wait until more ballots arrive or is unable to return by 6:00 p.m. (when polls close), she will have lost the right to vote. Before the Standing Amendment’s adoption, any of the individuals at that polling location could ask the court to extend the polling hours to make up for the time when voters could not vote. But the Standing Amendment forecloses that option. Instead, the voter must embark on a campaign to identify, contact, and potentially convince a group of three or even five members of her county election board to file the request. If she is unable to accomplish any of these tasks before 6:00 p.m., she will be unable to vote.”

The judge noted just such a thing happened in Monroe County in 2018. Polls in and around Bloomington ran out of ballots, prompting a citizen action in which a judge ordered polls there to remain open until 7 p.m. to accommodate voters.

“So what interests does the State put forward to justify the burdens imposed by these laws? The State’s brief contains a passing reference to an interest in structuring election laws to protect the integrity of the election, but it fails to expound on that point. The State may not simply invoke the phrase ‘election integrity’ without further explanation,” Young wrote.

The Office of Attorney General Curtis Hill did not immediately reply to an email seeking comment.

The court found Common Cause has shown a likelihood of succeeding in showing that the standing amendments unconstitutionally burden the right to vote and that the balance of harms weighs in favor of Hoosier voters Common Cause represents.

“Hoosiers must never be denied the ability to exercise their right to vote,” said Julia Vaughn, policy director of Common Cause Indiana. “We are extremely pleased with this decision and relieved that Hoosier voters will not be barred from seeking relief from state courts should they face obstacles in casting their vote” on Nov. 3.

“As voters face new threats across the U.S., Indiana is the only state that has tried to shut the courthouse doors to voters in this manner,” said Ami Gandhi of Chicago Lawyers’ Committee for Civil Rights, part of the legal team representing Common Cause. “This decision is particularly important for the voting rights of Black and Latino citizens, who are the most affected by polling place closures, long lines and equipment malfunctions.”