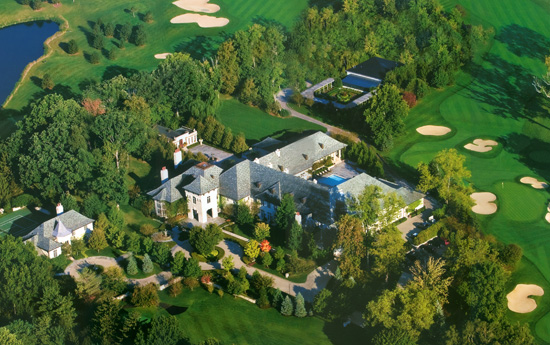 A 62-year land covenant tied to the Asherwood estate and surrounding properties in Carmel is likely to force the developers of a proposed luxury neighborhood into court.

Indianapolis-based Gradison Land Development Inc. and Carmel-based Old Towne Design Group announced in January their plans to purchase 87 acres of the greater 107-acre Asherwood estate property at 10110 Ditch Road in Carmel and develop 40 homes that would carry prices ranging from $1.2 million to $2 million.

Old Towne Partner Justin Moffett told the Carmel Plan Commission on Tuesday that a 240-acre land covenant established on the southwest side of Carmel in 1959 by former landowner Ruth Lilly presents a problem because it calls for home lots on the property to include front-yard setbacks of at least 75 feet.

Even though all 40 of the proposed lots in the Asherwood plan are at least an acre, pushing homes back 75 feet from the road creates smaller-than-desired back yards and less buffering in the rear of the lots, he said. Underlying zoning in the area calls for 40-foot setbacks in front yards.

Moffett said the Asherwood plans presented to the plan commission Tuesday fully comply with the existing covenants, but he also said the front-yard setbacks would be changed in the future if the developers were granted relief in the courts from the covenants.

“It does not make or break this proposal, and the lots as proposed tonight will stand whether we get relief from that covenant issue or not,” Moffett said.

Plan commission officials said the city does not have the authority to change the covenants. They voted to send the plans to the commission’s Residential Committee for further review at a March 30 meeting before they return to the full commission.

Bren Simon, widow of late shopping mall magnate Mel Simon, donated the Asherwood property to the Great American Songbook Foundation in 2017. The Carmel-based organization considered first turning the 50,000-square-foot mansion into a museum before an undisclosed individual purchased the building and 20 acres of the property in January.

As for a majority of the property surrounding the estate, Moffett said the current 18-hole and par-3 golf courses are slated to be redeveloped into lots ranging from 1 acre to 2.1 acres. Custom homes built by Gradison, Old Towne and Carmel-based Wedgewood Building Co. will be at least 4,900 square feet.

The overall development will need some city waivers, though, to allow for an entry cul-de-sac off Ditch Road that’s longer than 600 feet, private streets and a single access point instead of two off of a perimeter street (Ditch Road).

Moffett said the petition to the courts over the covenants will show that several homes in the Deerfield and Summer Lakes subdivisions, which are on covenant-protected land, are already in violation of the setback rule.

Indianapolis-based law firm Riley Bennett Egloff sent the plan commission a letter on behalf of some adjacent property owners under the covenant. The letter asks the commission not to grant any variances without the property owners’ agreement.

Moffett said he has a hard time understanding what possible downside there could be for those neighbors, since building the homes closer to the project’s roads would allow for a greater buffer between the neighborhoods.

“If the market really wanted 75-foot front yards and smaller back yards, we wouldn’t be having this conversation—but that’s not what the market wants,” Moffett said. “We’ve had a lot of internal communication about if we want to pursue [covenant changes]. At the end of the day, we thought it created a better subdivision and result for our neighbors.”