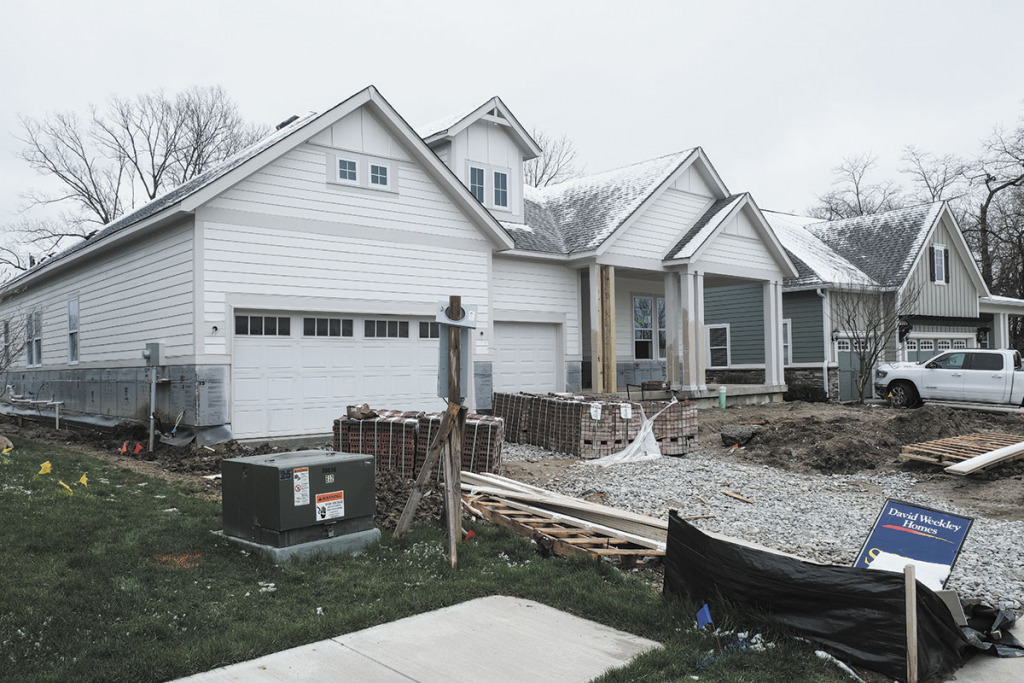 A bill establishing a revolving fund known as the Residential Housing Infrastructure Assistance Program advanced in committee Tuesday but still doesn’t have a price tag attached to it.

“We are creating a tool for our communities to provide infrastructure for the housing needs they see fit in their communities, especially workforce housing,” said Rep. Doug Miller, author of House Bill 1005.

The Elkhart Republican led a series of interim study committee meetings on housing and crafted this bill to specifically pay for the vital infrastructure needs not otherwise considered in alternate grants or programs.

Miller, a homebuilder, emphasized the need to invest in rural communities, with 70% of the revolving fund dedicated to areas with less than 50,000 residents. The fund will be overseen by the Indiana Finance Authority, and the money could be used for sidewalks, curbs, sewer, water and other infrastructure.

These costs are usually built into the cost of residential development projects. By providing a funding stream to cover the basics, the hope is to reduce the cost of housing overall.

“I think we’re really trying to look at Indiana and say we’ve got opportunities across the state to help areas that haven’t been helped before,” Miller said.

Applying localities will be evaluated on various criteria, including whether they’ve recently investigated their housing in a study or revised their ordinances to include higher density housing, accessory units and manufactured or modular housing.

Additional considerations include whether the community has requirements for garage sizes or placement, off-street parking or minimum lot sizes – which disincentivizes the large housing projects encouraged under this bill.

The Indiana Chamber of Commerce praised the bill in committee after highlighting the state’s need for more affordable housing in a press call earlier that day.

“The Indiana Workforce Excellence Institute, which is a subsidiary of the chamber, annually does a survey of employers and last year’s survey shows that the top external factor that is negatively impacting talent attraction or retention… is housing,” said David Ober, the organization’s vice president of taxation and public finance.

Mark Shublak, on behalf of the Indiana Economic Development Corporation and the Association for Affordable Housing, said every part of the state needs housing, specifically affordable and multi-family housing, to lure potential businesses.

“These mega plants that we’re recruiting and we want to win over… they will have a need for an updated housing supply,” Shublak said.

Gina Leckron, the state director of Habitat for Humanity, helms a nonprofit that builds affordable housing at reduced cost for lower income families, usually those making between $35,000-$55,000.

Leckron attested to the need for specific funding related to infrastructure, which neither grants nor private donors typically cover, for housing developments – especially in rural areas.

“We’re pretty savvy at applying for every dollar out there (in grants)… and there’s many more tools in the toolboxes of our urban centers,” Leckron said. “We’ve got to do better. I don’t want to live in a state where people don’t have access to entry-level homes.”

The Indiana Association of Realtors released a report Tuesday analyzing government solutions to Indiana’s housing shortage, studying the use of federal dollars and comparing Indiana to other states.

It identified a shortage of 30,000 homes when accounting for employment and population growth and asserted that the housing shortage decreased the state’s economic competitiveness.

“We expect that the READI funds combined with matched funds will total more than $600 (million) in housing-related investments,” the report said.

READI, or the Regional Economic Acceleration and Development Initiative, used federal dollars to award communities a combined $500 million, with Gov. Eric Holcomb proposing another $500 million infusion over the next biennium.

Locals aren’t just relying on READI funds for housing projects. According to the Brookings’ Local Government (American Rescue Plan Act) Investment Tracker, one out of every eight dollars awarded through the $1.9 trillion law went to housing.

The report called for more state investment in housing, particularly for employees, by granting tax incentives to companies that fund new housing or assist their workforce with down payments.

Sharing the report with the committee, Maggie McShane — the association’s vice president of government affairs — noted that the state currently doesn’t directly fund housing. Instead, housing agencies use federal grant money, which McShane said gave Indiana an opportunity to invest specifically in infrastructure needs as outlined in the revolving fund.

“Don’t mirror those programs that are already working well; look for something new,” McShane said. “You’re not going to be duplicating something with this bill that’s already out there.”

The committee voted unanimously, with one abstention, to send the bill to the House Ways and Means Committee to discuss funding. Two Democrats representing urban parts of Lake County, Rep. Earl Harris and Rep. Ragen Hatcher, expressed their concerns about the 70/30 split in the revolving fund in favor of rural communities.

“Hopefully we’ll find a way that those urban communities can get the same response and assistance that we’re offering to other communities,” Hatcher, a former Gary City Council Member, said.

Other committee members noted that nearly three-quarters of Lake County residents live in localities with less than 50,000 people – only the cities of Gary and Hammond wouldn’t qualify.

Rep. Mike Karickhoff, a Republican, said he initially had the same concerns, adding that his hometown of Kokomo netted the state’s largest economic project last year with a $2.5 billion investment from Stellantis/Samsung SDI. But Kokomo itself has more than 50,000 residents.

“We are scrambling (for housing)… I think we’ve got a hotline to Elkhart to help get RVs down for workers and all kinds of crazy stuff,” Karickhoff said. “But in the conversations with elected officials and community leaders, we recognize that … every -ville and -burg is going to benefit.”