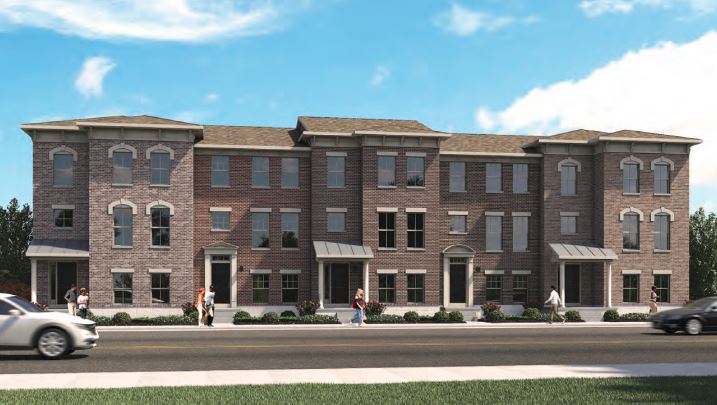 Lennar Homes of Indiana is proposing to build the Marketplace Towns on the north side of Fishers. The proposed development would include up to 53 townhouses. (Rendering courtesy city of Fishers)

Lennar Homes of Indiana is planning to build up to 53 townhouses on the north side of Fishers.

If plans come to fruition, Marketplace Towns will be developed on 5.27 acres north of East 135th Street on the east side of State Road 37 at Fishers Marketplace.

Steve Hardin, an attorney with Indianapolis-based law firm Faegre Drinker Biddle & Reath LLP, told the Fishers City Council on Monday night that the three-story townhouses would range from 1,700 to 2,200 square feet each with an average cost of $400,000.

The residences would also include a two-car garage, brick façade and access to a walkout courtyard.

Lennar plans to target the townhouses toward first-time home buyers, empty nesters, young families and single-person households, according to documents filed with the city.

The developer filed a request with the city council to rezone the land from PUD-M (multifamily) to PUD-R (residential) and be known as the Fishers Marketplace Planned Unit Development.

The rezoning request for the proposed development will go before the Fishers Planned Unit Development Committee and Plan Commission before heading back to the City Council.

Construction on Marketplace Towns is expected to begin in early 2023. A overall cost estimate for the proposed development was not provided.

Lennar Homes of Indiana, a division of Miami-based Lennar Corp., was the busiest homebuilder in the Indianapolis area in 2021, according to IBJ research, with 1,907 permit filings.

Fishers Marketplace is a mixed-use development near Fishers Junior High School that took years to come to fruition before construction began in 2013.

It includes the 306-unit apartment complex Flats at Fishers Marketplace, which sold for $36.85 million in April 2018, and a retail complex anchored by Walmart Neighborhood Market.

A portion of the Flats at Fishers Marketplace was already open in January 2015 when a major fire tore through one of its three existing buildings. That particular building wasn’t yet occupied with tenants. The complex eventually was finished in 2016.

Original plans for the land at what is now Fishers Marketplace called for a water park and a 244-room Wyndham Hotel to be built on the site of the former Britton Golf Course. However, the project dried up and the property fell into foreclosure before the recession.