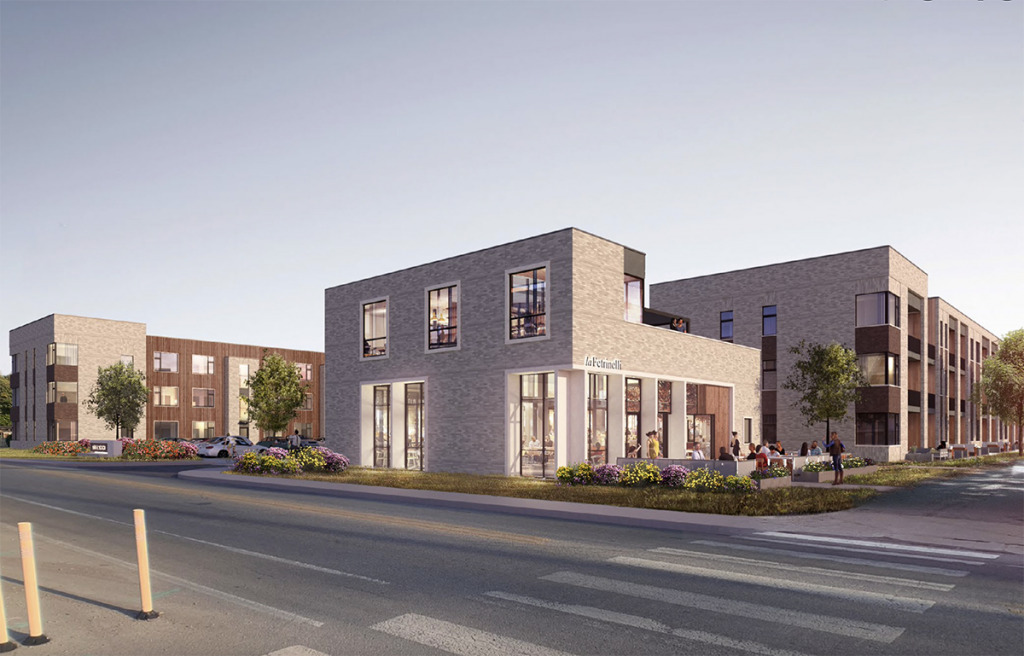 Monon 46 is planned for nearly three acres southeast of the intersection of East 46th Street and the Monon Trail. (Conceptual rendering courtesy of Holladay Properties)

Planning is under way for a $16 million apartment project along the Monon Trail, south of Broad Ripple.

Local developer Holladay Properties intends to build the three-story-walkup project in the 1100 block of East 46th Street, directly east of the popular pedestrian trail. The nearly three-acre parcel is currently occupied by a vacant warehouse building.

The 102-unit apartment development, called Monon 46, is expected to be comprised of three apartment buildings, including two fronting the trail. The third building would sit along 46th Street. The entire project would be located south of 46th Street.

The project would also feature a two-story, 3,500-square-foot retail building—likely a restaurant—and an amenity building, along with about 124 surface parking spaces.

“Our approach is to use the Monon as the catalyst for this development,” said Holladay development associate Jordan Corbin, who added the building will have a modern, garden-style design.

Holladay is in talks with potential restaurant tenants for the retail building, but Corbin said no decision has yet been made on the space.

Holladay is requesting to rezone the 2.9-acre parcel from the I-3, industrial, and D-5, dwelling, zoning designations to MU-2, allowing for mixed-use projects. The company is also seeking a variance of development standards to allow for buildings of up to 45 feet tall, and for a change to minimum and maximum setbacks for the structures.

The project is expected to be heard by the city’s Metropolitan Development Commission hearing examiner on Thursday.

The land is owned by IMH Estates LLC, but Holladay has it under contract.