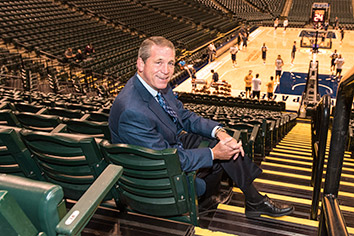 Rick Fuson, a longtime executive at Pacers Sports & Entertainment, will take over the CEO role at the organization effective Jan. 1.

In becoming CEO, Fuson will take over for the team’s current CEO, Herb Simon. Simon, 87, is PS&E’s owner and chairman.

“One of the remarkable characteristics of our organization is the caliber of people we are fortunate to have, and the transitions we announce today strengthen the leadership of the company and position PS&E for continued success into the future,” Simon said in a media release.

Simon will remain chairman and will continue to oversee all aspects of Pacers Sports & Entertainment, according to Daniel Lopez, vice president of external relations and corporate communications.

Fuson will continue to run the business side of PS&E, while President Kevin Pritchard continues to run basketball operations. “Both continue to report to Mr. Simon,” Lopez said.

Fuson joined the Pacers organization in 1984 to manage operations for the 1985 NBA All Star Game in Indianapolis. He has served as president and chief operating officer since September 2014.

Taylor joined the organization in 2011 and has served as executive vice president, chief sales and marketing officer since March 2020. In his new role he will manage the business functions of the Pacers’ sports properties, while continuing to oversee the organization’s marketing and sales efforts.

Raines joined the Pacers organization in 2015 and has served as executive vice president for corporate communications, community engagement and facility operations since March 2020. In her new role, she will retain her current responsibilities, with the added responsibilities of overseeing human resources and information technology activities.

Bower will remain in his current position through 2022 before transitioning to his new role. The others, like Fuson, will assume their new roles on Jan. 1.

And in other personnel news, the Pacers organization announced last week that it had hired Tracy Ellis-Ward to serve as its first-ever senior vice president for diversity, equity and inclusion.