Planned Parenthood of Indiana and Kentucky has suffered multiple years of budget deficits and health-clinic closures, but a new alliance with the Seattle-based affiliate chapter might be the key to its turnaround and longevity.

Planned Parenthood of the Great Northwest and Hawaiian Islands announced plans in February to merge with the Indianapolis-based chapter, and Chris Charbonneau, CEO of the combined organization, says there is potential for growth here.

In fact, 45 positions have already been created, mostly in Indiana where the majority of the health clinics are located. The jobs are mainly in medical services, but also cover education and public policy.

“I foresee that Planned Parenthood in Indiana and Kentucky is going to be exceptionally strong,” Charbonneau said. “There are so many people wanting and needing services.”

The expansion efforts are only possible, though, because Indiana and Kentucky are tapping into the wealth from donors in Seattle, who were looking for a way to make a greater impact with their dollars. Fighting abortion restrictions in conservative states like Indiana and Kentucky, which regularly pass new regulations, could be the answer.

“We can help women that Mike Pence hurt,” Charbonneau said, referring to the former Indiana governor who is now vice president. “That’s hugely attractive to people who feel like they are undoing damage.”

The western chapter already included four states—Washington, Idaho, Hawaii and Alaska—and came with a budget more than four times the size of the Indiana and Kentucky chapter. The combined organization’s budget will be $90 million. Even though funding from other states will come here, donations from Indiana and Kentucky will not be spent elsewhere.

“What’s absolutely true now is, Indiana and Kentucky can be confident that the existence will continue and that the bottom-line needs will be met,” said Betty Cockrum, a former CEO of the Indiana-Kentucky organization. “That’s huge and a great comfort.”

Mike Fichter, president and CEO of Indiana Right to Life, said any growth of the organization will result in more abortions, and he criticized the decision to invest out-of-state donations in Indiana.

“The influx of cash from Planned Parenthood donors from the Pacific Northwest, coupled with the swift change in leadership, seems to indicate the recent merger was actually less of a merger and more of a takeover,” Fichter said. “We believe it is clear Indiana is now a test market for Planned Parenthood’s national plan to expand abortion access.”

Planned Parenthood offers reproductive health care to low-income women, and also serves men and patients of all income levels. In 2018, PPINK served 46,000 patients, 40% of whom had incomes at or below the poverty line. That care included STD tests, Pap tests and abortions, as well as providing condoms and oral contraceptives.

“Obviously, Planned Parenthood has a huge fingerprint on the health of Hoosier women and women in Kentucky and some men,” Charbonneau said. “But I feel like we have a lot more possibilities.”

This latest merger might seem unusual because of the geography, but Planned Parenthood chapters have been merging and combining resources for years. At one point, more than 200 affiliates operated across the country. By 2013, that was down to 73; today, it’s at 56.

In 2004, the last of the Indiana affiliates merged to become a statewide group. In 2013, Indiana merged with the Kentucky affiliate to become PPINK. At that time, the chapter had 28 health centers between the two states, with most in Indiana.

Cockrum said that merger was a way to save the significantly smaller Kentucky chapter, which had a budget of $1.2 million. Indiana’s budget was $14.3 million.

“That took on additional responsibility without a cash flow that covered costs entirely,” she said.

Charbonneau said the latest merger—which is not yet finalized, although the two chapters are technically operating as one—was done to cut costs in areas like billing, maintaining health records and computer support, and to transfer cash from an affiliate fighting fewer political and legal battles.

Charbonneau, who has been with Planned Parenthood for 37 years in various roles, also oversaw the merger of all chapters within Washington and then added Alaska, Idaho and Hawaii to the alliance.

“This is not a starter merger,” she said.

Angela White, senior consultant and CEO of Greenwood-based Johnson Grossnickle and Associates, said mergers work best when the entities’ missions align, which is obviously the case with the Planned Parenthood chapters, and when the move is driven by sustainability efforts.

Still, the Planned Parenthood merger doesn’t seem like an obvious fit given the geography, White said.

“Planned Parenthood is really looking at thinking outside the box,” she said. “I just think it’s very bold. I gotta hand it to them.”

Board members were apprehensive at first, too, about the distance.

“I think it’s fair to say that the initial reaction of everybody on our board was, ‘Well that’s crazy. How would that ever work?’” former PPINK Board Chairwoman Kim Greene said. “It just seemed like the geographic difference would be insurmountable.”

But they were swayed after a visit to Seattle, where they met with other board members and learned about the previous mergers.

“We’re sort of at a point where, where people are located isn’t that relevant,” said board member Nora Hiatt, who admitted she was initially skeptical of the merger. “It’s a different way of looking at things and a different way of operating, but I think it’s benefiting the patients in Indiana and Kentucky.”

Charbonneau is based in Seattle but travels to all states in the alliance, which covers six time zones.

To bring operations up to par with those in its other states, the alliance is allocating $900,000 from the northwest region to support Indiana and Kentucky, Charbonneau said.

Part of that investment has already gone to increasing salaries for some positions, which she said helped attract more than enough qualified candidates when the group started hiring.

“After we did that, new jobs at Planned Parenthood became very attractive,” Charbonneau said.

The organization might hire more employees—on top of the 45 already added—depending on whether demand for services increases. Charbonneau is also looking to reverse the trend of clinic closings and instead increase the number of facilities, but she does not have a specific number or locations in mind.

“I’m still really looking at the map,” she said. “There are major cities in Indiana without a presence and it’s important that we figure out how to be there.”

Cockrum said, despite the previous closures and the drop in patient count, she believes more Planned Parenthood services are needed.

“There are areas all over both states where the persons most in need of reproductive health care services don’t have access,” she said.

One program that will be launching in Indiana and Kentucky soon is a telemedicine option for patients, which is already offered through Planned Parenthood in some states.

Charbonneau said the service provides care access to women in rural areas far from a clinic or women in urban areas who struggle to find time to get to a clinic. That means a woman could be prescribed birth control, for example, without having to step foot in a clinic.

“People really love being able to do this remotely,” Charbonneau said.

She hopes the increased presence throughout the state will translate into more donor support, with a goal of having Indiana and Kentucky become sustainable without funding from Seattle.

“I think people get more and more excited as services get beefed up,” she said, “and they see a real impact on their community.” 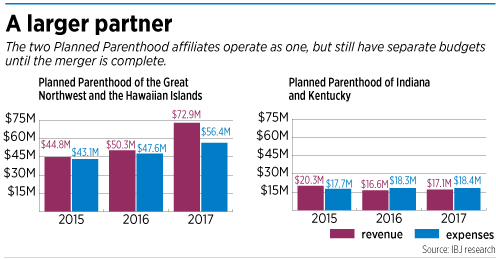 Cockrum cautioned that Indiana and Kentucky have a much different political landscape than the northwestern states, which could be a tough learning curve.

“That just makes it important that they have people on the ground here and in Kentucky who do have a presence and who do have the relationships that you need,” she said.

Federal funding also continues to be a looming problem for the organization.

Charbonneau said most states have laws making it illegal for medical providers to withhold information about care options from patients, and beyond that, they believe it’s unethical to not disclose all options.

“It’s unthinkable to do anything else,” Charbonneau said. “I think it’s a breach of trust with the people you serve, and so we’re not going to be violating that trust.”

Planned Parenthood is fighting the restriction in court, but in the meantime, affiliates are not using any federal money. Charbonneau said that accounts for about $700,000 annually for the newly merged organization, but the net loss is slightly lower because the cost of administering the federal program is eliminated.

To make up the difference, she said, the group will adjust its sliding-fee scale and accept more private insurance.

“We’re going to diversify our income sources more so we are able to balance the people who have money and people who don’t,” Charbonneau said. “But it is not our intention to turn people away.”

Planned Parenthood is also in transition on the national level. The board fired President Leana Wen last month after less than a year on the job after disagreements surfaced between her and board members about how to fight abortion restrictions.

Longtime Planned Parenthood advocate and board member Alexis McGill Johnson has been named acting national president and CEO and is expected to serve in that role through the 2020 election.

“I thought it was incredibly unfortunate to have a false start,” Charbonneau said. “But I’m really happy with who the national organization chose as the interim.”

The turnover likely won’t affect state or local services, though, as the chapters operate independently.

One thought on “Merger could lift Planned Parenthood”