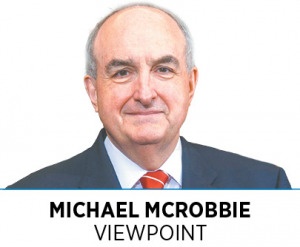 Several days ago, the Legislature passed a bill that will provide a vitally needed enhancement to Indiana’s election infrastructure.

The bill moves up the deadline from Dec. 31, 2029, to July 1, 2024, for the state’s counties to add printing devices to electronic voting machines so they can produce a voter-verifiable paper audit trail. Indiana is one of several states where the use of electronic voting machines without a paper trail is widespread. The bill also provides that, after July 1, a county must take certain precautions if it is not yet using a voter-verifiable paper audit trail for an election.

This is a strengthening of Indiana’s election infrastructure that was vitally needed. It will increase the security and verifiability of voting in Indiana, and it will do so at a modest cost. Electronic voting machines without this enhancement would have been a grave risk to future elections in our state, which has properly recognized the need to modernize its election systems at all levels—from local to presidential—to better protect it from a range of cyber-enabled threats.

This is a problem I became very familiar with over recent years. Just a few weeks after the 2016 presidential election, I received a call from the nation’s leading scientific body—the National Academies of Sciences, Engineering and Medicine—inviting me to co-chair a nonpartisan expert committee charged with examining the future of voting and how to make it more secure, accessible, reliable and verifiable. This opportunity followed concerns that arose out of what was then one of the most contentious elections in our country’s history. Quite presciently, NASEM recognized that confidence in the integrity of the voting system would be one of the most critical issues for the next (2020) presidential election.

It wasn’t long before I found myself sharing thoughts and ideas with some of our nation’s leading computer science and cybersecurity experts, legal and elections scholars, social scientists and, of particular importance, senior election officials who were at the front lines of the election process itself.

When we started meeting in early 2017, I felt quite certain that our committee would come up with some highly technically advanced solutions to securing our voting system. Sure enough, we spent many hours discussing and debating the merits of various technological approaches that had been proposed—from blockchain to biometrics—and we heard testimony concerning them from numerous experts at multiple public hearings. Each was systematically examined in turn, but then one by one dismissed because of their fundamental vulnerabilities or impracticality.

We took an exhaustive look, in this age of ubiquitous smartphones, at online voting, touted by many as the solution to this problem, only to determine that the technology does not yet exist that can guarantee the secrecy, security and verifiability of a marked ballot transmitted over the internet.

Looking back now, I doubt many of us would have predicted the technology we ended up recommending in our final report. But it was paper! More specifically, we proposed that all voting should be carried out only with human-readable paper ballots. The irony was enormous. At a time when new technology is viewed as the answer to almost all of the problems facing our society, our primary solution for protecting the security, reliability and integrity of elections in the 21st century was an “innovation” dating back more than two millennia.

In the end, nothing beat paper. The accuracy of paper ballots can be verified by voters. They cannot be manipulated by faulty software or hardware. Paper ballots can also be used to audit election outcomes in a mathematically rigorous way called risk-limiting auditing, to determine—with a high level of confidence—whether a reported election outcome reflects a correct tabulation of the votes that were cast.

During its most recent session, Indiana’s public officials discussed many commendable improvements to the state’s election processes and infrastructure, but I would argue that the move to a voter-verifiable paper audit trail was the most vital.

No one suggests, of course, that we should stop exploring new and innovative approaches to voting and envisioning what our elections might look like in the future. For now, though, paper continues to be our best option to convince Hoosiers that their ballots will be accurately cast and counted, and to ensure public trust in the integrity of the vital machinery of our democracy.•

Michael A. McRobbie is university chancellor, president emeritus and professor of computer science at Indiana University. He was the co-chair of the Committee on the Future of Voting of the National Academies of Sciences, Engineering and Medicine.