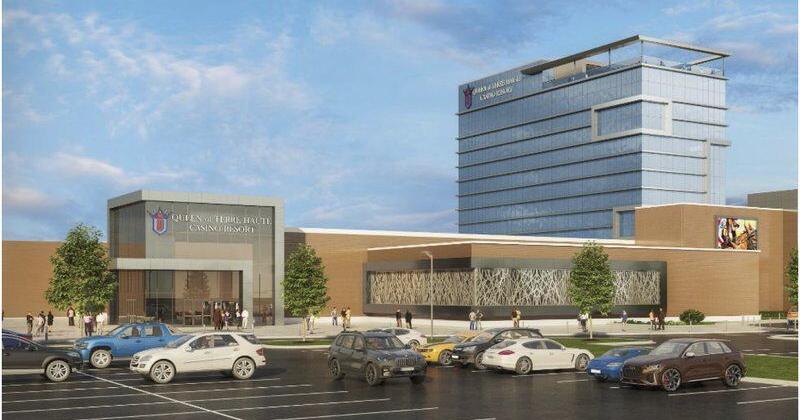 Churchill Downs presented plans for a $240 million project that includes a casino, along with a 10-story, 125-room hotel with a rooftop lounge. (Rendering courtesy of the Indiana Gaming Commission)

Indiana officials are trying to push forward stalled plans for a Terre Haute casino, giving the company that runs the Kentucky Derby a license for the project on Tuesday despite a new lawsuit criticizing the proposed site.

The commission preliminarily picked Churchill Downs in November over three other companies for the Terre Haute license. Churchill Downs presented plans for a $240 million project that includes a casino, along with a 10-story, 125-room hotel with a rooftop lounge.

One of the companies that was pass over for the license, Las Vegas-based Full House Resorts, sued the Gaming Commission on Friday. The lawsuit claims the commission violated state law by considering suggestions from Churchill Downs that it would look at sites other than the one included in its application, which is adjacent to Terre Haute’s sewage treatment plant and the new Vigo County Jail.

“The nature of a sewage treatment plant in such proximity to a public entertainment venue is counterintuitive to any prudent, rational individual,” the lawsuit said. “Churchill’s proposal of multiple and amorphous sites should have disqualified its proposal from consideration because Indiana law required one location to be provided in the application.”

Full House, which owns an Indiana casino in the Ohio River town of Rising Sun, and the other applicants had proposed sites directly along or near Interstate 70 a few miles away on the city’s east side.

Gaming Commission officials said the lawsuit could further delay the millions of dollars of investment in the project that was first derailed amid an investigation into allegations of criminal and financial misconduct against top executives in an ownership group that originally sought the casino license in 2019.

“I think it’s vindictive, it’s malicious,” McMains said. “I think it is frivolous.”

Besides its namesake horse track in Louisville and pari-mutuel facilities in Kentucky, Churchill Downs operates 10 casinos in eight states.

The Terre Haute project would be Indiana’s 13th casino location, with the city about 70 miles west of Indianapolis becoming the state’s first new community to get one since 2008.

State officials forced Spectacle last year to give up ownership of that project to Terre Haute business owner Greg Gibson, but the Gaming Commission voted in June against renewing the casino license because Gibson’s ownership group hadn’t hired an executive team or secured full financing after more than a year.

Ratcliff has denied wrongdoing and hasn’t been charged by federal authorities in the campaign financing case. Keeler is awaiting trial on the charges.

Ratcliff agreed in March to give up his state casino license and sell his ownership stake in a Gary casino project, ending more than a decade as a heavyweight in Indiana’s gambling industry.