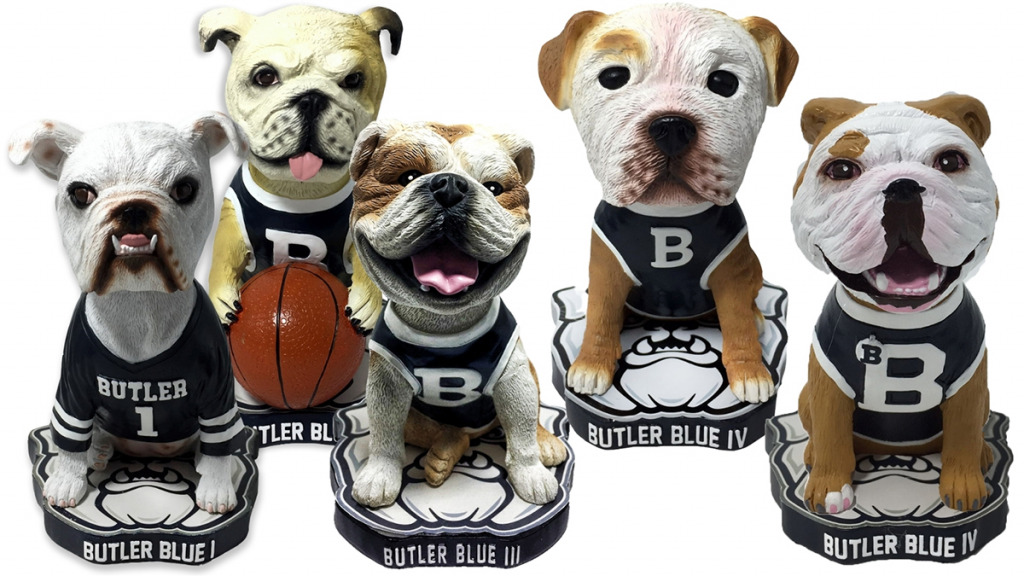 The new release of Butler bobbleheads features figurines for Blue I (left), Blue II (second from left) and an adult version of Blue IV. (Photo courtesy of the National Bobblehead Hall of Fame and Museum)

There are only 2,021 bobbleheads available of each type in the new litter. They are available through the National Bobblehead Hall of Fame and Museum’s store and Butler’s bookstore. Each bobblehead is $25.

Each bobblehead’s base has the dog’s name and the Butler logo.

The university debuted its first official live canine mascot in 2000 with Butler Blue I, who served until 2003. The longest-serving pup was Butler II, who held the position for nine years from 2004 to 2013 and became a national curiosity during Butler’s two appearances in the NCAA men’s basketball championship game in 2010 and 2011.

Blue III, also known as “Trip,” retired from active duty at the age of 8 on May 31, 2020, and took on an active role as mascot emeritus. That paved the way for the current mascot, Blue IV.

“From Butler Blue I to Butler Blue IV, fans across the country have come to love Butler’s lovable mascots,” National Bobblehead Hall of Fame and Museum co-founder and CEO Phil Sklar said in a media release. “We’re excited to be producing this complete set of bobbleheads for Butler fans.”