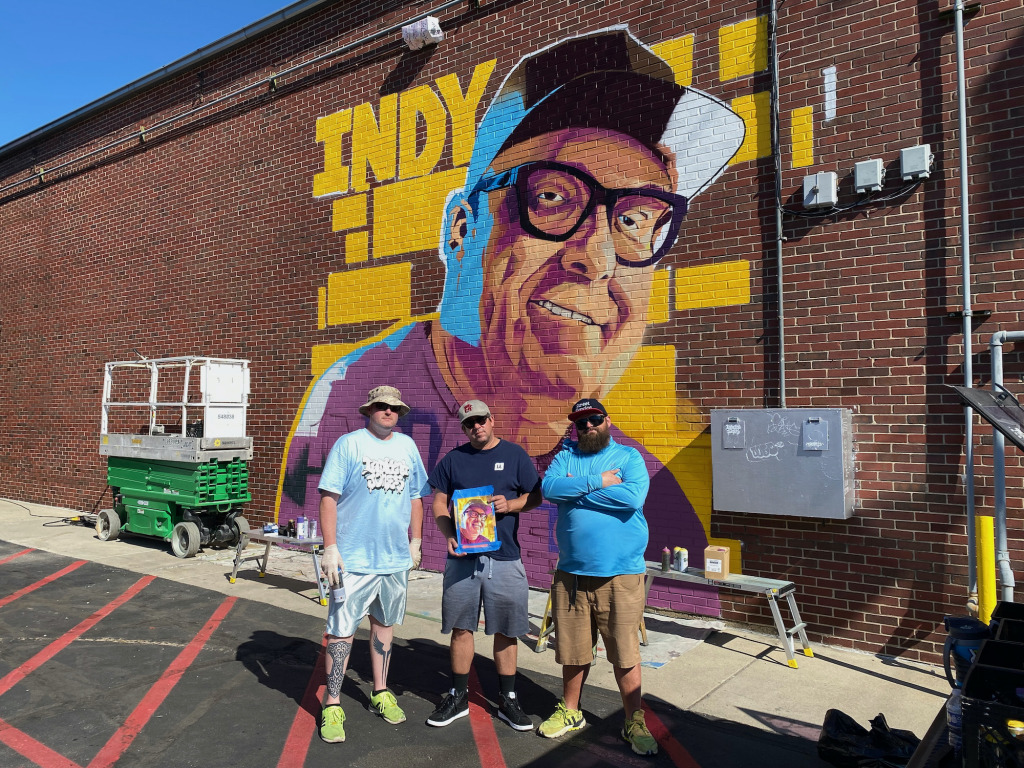 From left, Matt Lawrence, Brian Presnell and Dan Thompson pose in front of the new DJ Indiana Jones mural on the south side of the Vogue, 6259 N. College Ave. (IBJ photo/Dave Lindquist)

Mural artist Dan “Handskillz” Thompson is completing this week a tribute to Ron “DJ Indiana Jones” Miner at a high-profile location worthy of Miner’s contribution to the Indianapolis music community.

Miner’s image is being added to the exterior southern wall of Broad Ripple’s Vogue music venue, 6259 N. College Ave. Miner, who died in December 2020 from a heart attack at age 50, organized dozens of concerts and parties at the Vogue, not to mention times he appeared onstage in the role of DJ.

Brian Presnell, a lifelong friend of Miner’s who secured a scissors lift for use during painting, said the mural’s proximity to the Vogue’s parking lot will make sure Miner’s face is visible to touring hip-hop artists who knew the Ben Davis High School and IUPUI alum.

Ryan “DJ Helicon” Hickey worked with Vogue co-owner Scott Kraege to select the location for the mural, and artist Matt Lawrence is assisting Thompson with the installation. A photo of a smiling Miner captured by Pattern magazine founder Polina Osherov served as inspiration for the mural.

“There was a lot of discussion about how you picture Ron,” Thompson said. “He’s DJ Indiana Jones, but to depict him as a DJ would be such a small glimpse into what he did.”

In the mid-1990s, Miner pursued his hip-hop dreams in New York City. He worked for Pendulum Records and EMI.

Miner served as manager for Indianapolis hip-hop group the Mudkids, as well as for rapper Rhymefest—co-writer of Kanye West hit “Jesus Walks.”

Miner owned Broad Ripple’s Casba nightclub. Before owning the Casba, he launched the weekly “Reggae Revolution” party at the basement bar in 1997.

In 2018, Miner became part of the leadership team for Chreece, an annual hip-hop festival presented in Fountain Square.

“So many people loved him,” Presnell said. “He was such a good connector for our city. He definitely held it down for the music community in every way he could.”

Unrelated to the new mural, a collection of vinyl records owned by Miner will be sold Saturday at a private residence. For information about attending this sale, visit eventbrite.com.