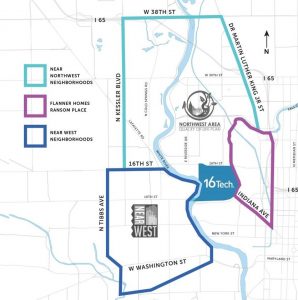 The not-for-profit manager of the 16 Tech Innovation District has teamed with several local organizations to launch a fund that will invest in neighborhoods surrounding the district, organizers announced Friday morning.

Organizers say the fund has been seeded with $3 million in public funding through the city of Indianapolis and will be sustained through a 20-cent-per-square-foot fee paid by 16 Tech Innovation District tenants. Additional funds will be sought though donations from individuals and organizations.

The 16 tech district is a $500 million, 60-acre project between the White River and Fall Creek, just north of IUPUI and several major hospitals. It aims to create the area’s first major tech-focused live/work community.

Developers of 16 Tech—a consortium of offices, laboratories, housing and retail space—believe the campus will become a powerful economic engine by fostering collaboration and innovation.

The development is projected to employ more than 3,000 highly skilled workers over the next decade and contain more than 3 million square feet of office and lab space, in addition to parks, walking paths and other amenities.

Organizers said at least $350,000 in funding will be available annually from the fund for community investment. Grants will be awarded to not-for-profits of all sizes.