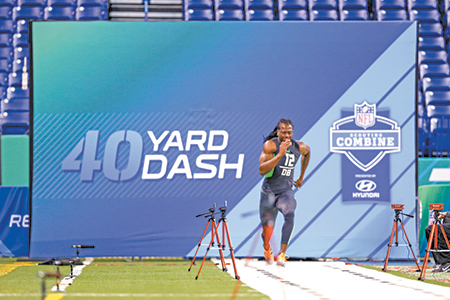 The NFL scouting combine will not be held as usual this year in Indianapolis, the league told teams in a memo Monday.

The city has hosted the event every year since 1987.

In the sport’s latest changes to its procedures as it operates during the coronavirus pandemic, the league said all on-field workouts by eligible players leading up to the NFL draft will take place at players’ schools during on-campus pro days for teams’ coaches, executives and scouts.

Medical information on the players is to be gathered through virtual consultations, testing at local facilities and some in-person exams at designated locations. Teams’ interviews with players will be conducted remotely.

“Consistent with medical and public health advice, the 2021 Combine will be conducted in a different format,” the NFL’s memo to teams said. “There will be no in-person workouts at the Combine.”

The combine was held last year in Indianapolis just before the NFL began to modify its operations based on coronavirus-related considerations. The event normally is a gathering place in late February and early March for teams and league officials, used to discuss a variety of issues against the backdrop of more than 300 draft-eligible players undergoing medical exams, participating in drills and meeting with teams.

It had been clear for some time, however, that with the coronavirus spreading rapidly across the nation, the league probably would not be able to take a business-as-usual approach to the combine.

“We’ve had a few conversations with the league about the combine. . . . I don’t expect the country to be in a significantly different place at the time of the combine than where we are right now,” DeMaurice Smith, the executive director of the NFL Players Association, said last week.

The NFL said in its memo that it made its decision after a special committee of owners, general managers and medical experts provided guidance.

“We will work with the schools to encourage consistency in testing and drills across pro days and ensure that all clubs have access to video from those workouts, irrespective of whether the club is represented at a particular workout,” the league’s memo to teams said.

The NFL has used daily coronavirus testing of players, coaches and team staffers and ever-tightening protocols to play its season. It finished its 256-game regular season within the originally allotted 17 weeks and has completed the first two rounds of the playoffs, with only the two conference championship games and the Super Bowl remaining.

But the league’s offseason operations have changed dramatically over the past year. NFL teams conducted free agency remotely last year. The live event for last year’s NFL draft was canceled and teams’ coaches and general managers worked from home as the proceedings were held virtually. Teams had no in-person offseason programs for players and the entire preseason was canceled. All owners’ meetings have been held remotely.

Now, a change in format for the NFL’s annual job fair for players has been added to that list.

9 thoughts on “NFL scraps scouting combine in Indy in 2021”