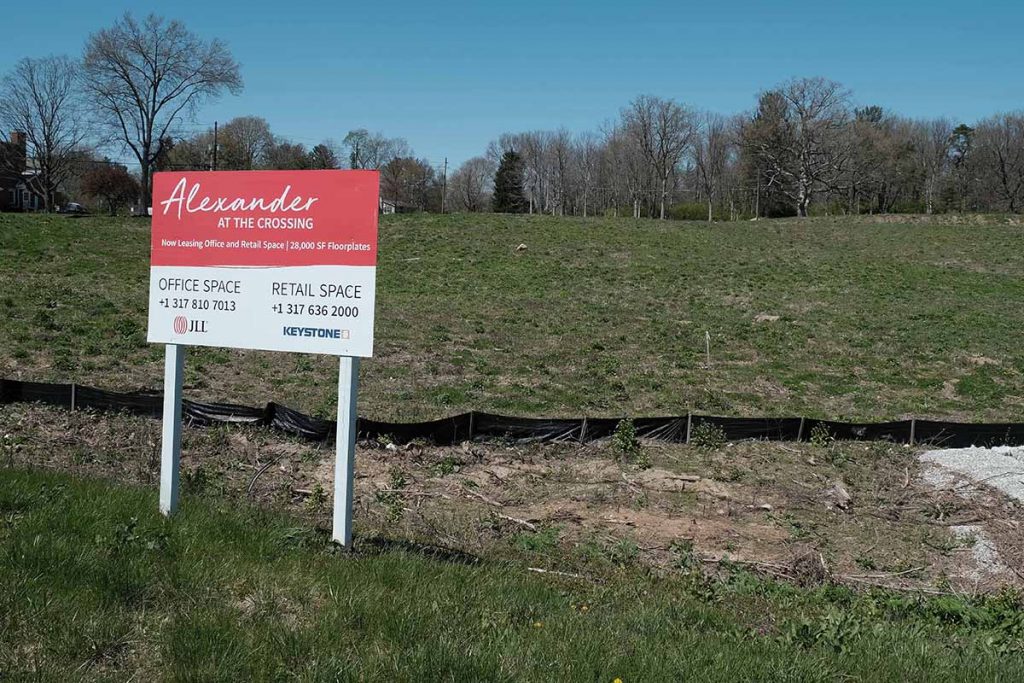 The site of the proposed Alexander at the Crossing project has largely been cleared of trees. (IBJ photo/Eric Learned)

A group of north-side residents has stymied plans for a controversial development near Keystone at the Crossing, persuading a judge to void a City-County Council decision allowing the office, retail and restaurant project.

The residents of the Driftwood Hills neighborhood, located northwest of the intersection of Keystone Avenue and 86th Street, filed a lawsuit in May 2018 against the city. They claimed the council acted improperly by granting a rezoning request for the 5.8-acre site earmarked for the project near the intersection. The site is part of an area called Haverstick Forest.

Green Indy LLC, an affiliate of local developer Keystone Realty Group, had proposed building its Alexander at the Crossing project on the site. In October 2017, the city’s Metropolitan Development Commission rejected the rezoning request from Green Indy for plans that included a $20 million, 60,000-square-foot office and retail building.

However, in April 2018, the City-County Council approved a settlement between Green Indy and other nearby residents representing the Nora-Northside Community Council to build a revised version of the Alexander project.

In a decision dated Thursday, Johnson County Superior Court Judge Kevin Barton vacated the City-County Council’s decision, because, he said, the council failed to follow procedures laid out in state law for planning and zoning cases.

Barton found that the council should have referred the matter back to the Metropolitan Development Commission.

The judge also found that the Driftwood Hills plaintiffs were denied an opportunity for a proper hearing.

In the meantime, the site in question largely has been cleared of trees, which was permitted under the agreement.

“It’s a bittersweet win for those who understood the invaluable role these trees played in our community,” said Elizabeth Mahoney, one of seven Driftwood residents who were plaintiffs in the suit.

“As a good community partner, Green Indy will continue to collaborate with the neighborhood and city, as they have for the last nine years, on a great project to enhance our community,” Calderon said in a statement to IBJ.

The Driftwood Hills Neighborhood Association and Indiana Forest Alliance also were plaintiffs in the suit, but Barton found that they did not have standing in the case because they were not financially impacted by the zoning decision.

“This ruling shows that when citizens stand up to protect their property values and the forests near them, and zoning officials agree with them, that the City-County Council can’t arbitrarily use a technicality to trample on those rights and allow some new development anyway, ” said Jeff Stant, executive director of the Indiana Forest Alliance, in a media statement.

The council’s rare reversal of the MDC decision came about after then-councilor Colleen Fanning led a move to “call down” Green Indy’s petition from the commission.

Fanning said a clerical error brought the issue back through the council, and calling it down gave neighbors a chance to have a say in redeveloping the site, which Green Indy had purchased in 2011 for $2.2 million.

Nora residents who agreed to the settlement with Green Indy said the revised project was better than previous plans for the site. They wanted to prevent development of a big-box store, which had been proposed by another developer in the mid-2000s.

The zoning already in place for the land would have allowed such a development, they said. And it likely would have had a much greater impact on the neighborhood in terms of environmental and traffic issues than what Green Indy had proposed, said Ruth Hayes, president of the Nora-Northside Community Council.

“We came to a decision that the lesser of the two evils would be the Alexander project,” Hayes told IBJ on Tuesday.

Hayes worried that with the negotiated agreement with Green Indy now voided, a big-box project is again possible for the site–whether Green Indy wants to pursue it or the firm ends up selling the land to another developer.

“I do not see this as a win for the community at large,” Hayes said. “There are no protections for the neighborhood now.”

Hayes said she hoped city officials would appeal the judge’s ruling. An attorney for the council did not immediately respond on Tuesday afternoon to IBJ’s request for comment.