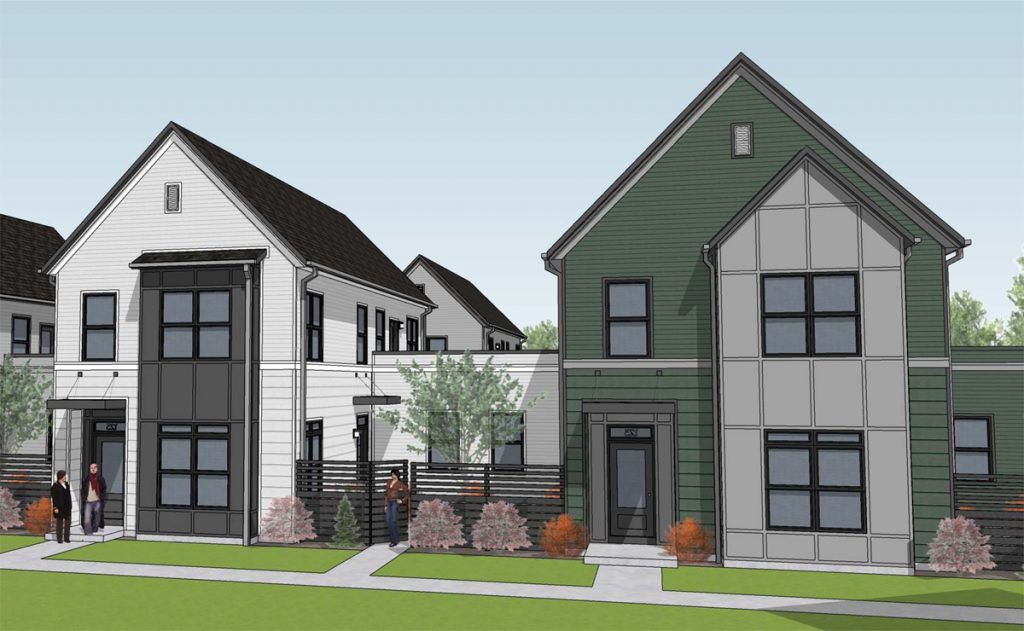 A segment of the Monon Roots development. (Rendering courtesy of Onyx+East)

Local residential development firm Onyx+East has staked out yet another project on the near-north side of Indianapolis, planning to spend about $11.5 million to construct 37 town houses on a parcel along the Monon Trail.

The company plans to build an assortment of two- and three-story attached homes on a vacant 2.1-acre lot at the southwest corner of East 19th and North Alvord Streets, adjacent to the recreational trail.

The project, dubbed Monon Roots, would feature homes costing from $280,000 to $420,000, along with a variety of infrastructure improvements to the block, including 18 parking spaces, new sidewalks and landscaping along the west side of Alvord Street.

Onyx+East on Wednesday will ask the city’s Metropolitan Development Commission to approve a request to  rezone the land from I-3 (industrial) to D-P (planned development), which would allow the project to move forward.

If approved by the MDC—as recommended by the city’s Department of Metropolitan Development staff—the change still would require an OK from the City-County Council.

The property is currently owned by Alpha Group I LLC, which acquired the land in December for $800,000 from Monon Partners LLC. Onyx+East has the property under contract for an undisclosed price, pending city rezoning approval.

Monon Roots is the third Onyx+East project to seek city approval in recent months, including a $6.5 million, 21-unit development at East 10th and Sterling Streets and a partnership with Salt Lake City-based Extra Space Storage.

The latter project, which will cost at least $13 million, includes 24 residential flats, 15 town houses and a new 115,000-square-foot storage facility in the Lockerbie Square neighborhood.

“We’re in a period of investment and growth,” said David Leazenby, vice president of acquisitions for Onyx+East.

He added that the company also has five projects in the works in the Tampa, Florida, area. “But the market (in Indianapolis) is really good and there’s a lot of buyers looking for opportunities to invest—and many want to invest in neighborhoods like this.”

Monon Roots would feature 16 two-story “courtyard” homes and 21 three-story attached homes, according to filings with the city.

The two-story houses would come in two sizes: 1,750 square feet and 2,075 square feet. Each house would have a private, attached two-car garage; two or three bedrooms; two-and-a-half or three bathrooms; optional rooftop decks atop the garage; and a small, private yard. The homes are expected to cost $375,000 to $410,000.

“The name Monon Roots actually came from the concept of having a garden or an outdoor patio space,” Leazenby said. Personal outdoor space “is pretty uncommon in an attached townhome product.”

Those units would feature two to four bedrooms; two-and-a-half to three bathrooms, and one-car garages for the 1,270-square-foot units or two-car garages on the larger units. Select homes would also have options for second-floor balconies and rooftop decks. The price for the homes would range from $280,000 to $420,000.

A private alley would run north-south through the middle of the development. The 17 units fronting the Monon would each have driveways able to accommodate up to two cars.

Leazenby said the project’s proximity to amenities and other development activity is part of the firm’s strategy with new residential developments.

“Our whole business is about redeveloping in urban neighborhoods that are walkable, so they have access to amenities and recreation opportunities,” he said. “Most often, we seek opportunities that are small infill (sites)—usually in the middle of other investments that are going on, whether that’s commercial or residential.”

Areas near the Monon Trail, particularly on the near-north side, have seen a groundswell of redevelopment in recent years.

This includes a project Onyx+East is constructing just south, in the 1500 block of Yandes Street. That 23-unit, $5.5 million town house development, known as Millside, will feature units from the upper $200,000s to the low $300,000s. It is expected to be completed this year.

Tinker House Events also opened a venue at East 16th Street and the Monon Trail in recent years, and TWG Development LLC is in the midst of a massive redevelopment of the former Indianapolis Public Schools facilities maintenance division in the same block. The firm is building 188 apartment units on the site, known as the Wesmont, as part of a $30 million overhaul that also includes already-completed office space for local tech firm Lessonly.

Leazenby said Onyx+East hopes to start construction on Monon Roots this summer and have at least one model open by the end of the year or early 2021.

Indianapolis firm Rottman Collier Architects is the designer on the project, and national firm Woolpert is serving as civil engineer through its local office.