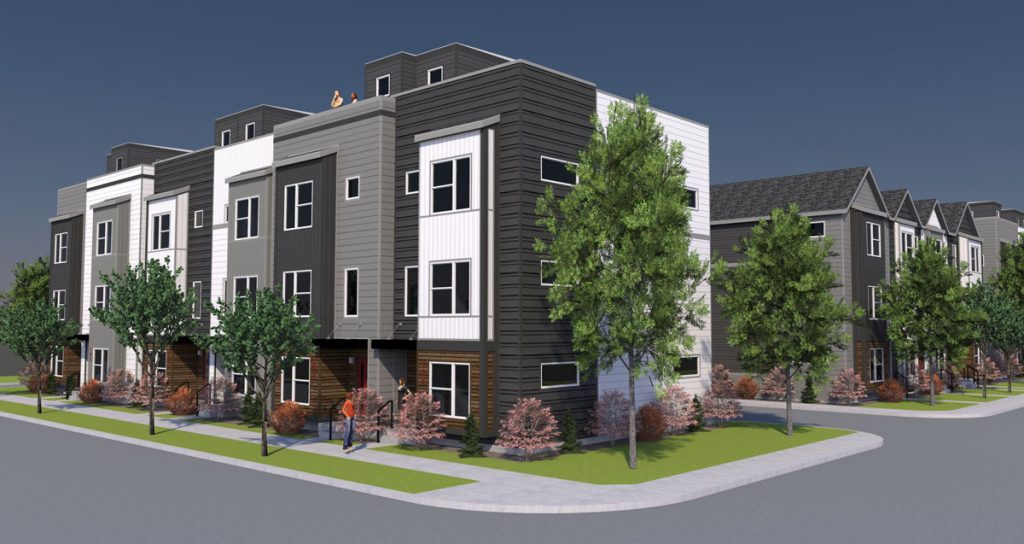 A rendering of Near 925, looking from the intersection of 10th and Sterling streets. (Image courtesy of Onyx+East)

The Indianapolis-based company plans to construct 21 townhomes across six parcels at the northwest corner of East 10th and Sterling streets, according to filings with the city’s Department of Metropolitan Development and a company official.

Each three-story unit is expected to contain two bedrooms and two-and-a-half bathrooms, with the larger units featuring rooftop decks and two-car garages. The smaller units would have rear balconies and one-car garages.

Brandon Bart, a senior development associate for Onyx+East, said the company considers the project an opportunity to jump-start additional development in the Windsor Park neighborhood.

The project requires multiple approvals from the city’s Metropolitan Development Commission, including rezoning the property and permission to vacate an alley that separates the northern parcels from those to the south.

The amalgamation of land is currently zoned D-8 and C3, for single-family homes and commercial developments, respectively. Onyx+East is asking the city to allow the entire property to be rezoned to D-P for a planned development.

The company in recent weeks confirmed plans for another townhouse and flats project in partnership with Extra Space Storage in the Lockerbie neighborhood.

The land is owned by Jackson Control Properties Inc., but Onyx+East has it under contract, pending city approval.

But city staff has so far recommended denying each of the requests tied to the project.

The reasons include concerns over the density of the development, whether vacating an alley is in the public interest, and the overall layout for the project, which would have interior roadways and a private, interior courtyard.

A staff report also indicated the project statement lacked specifics necessary for the city to complete a complete and accurate report. Onyx+East submitted documents in November and December, but city staff said they were not enough to give the city proper scale for the project.

“(The) lack of details, dimensions and scale of the conceptual site plans make them virtually unusable for establishing development standards,” the staff report said. “Even if all the previous (reasons) provided by staff for denying this request would be invalidated, the lack of an adequate reviewable development plan is reason enough to deny this request.”

Bart said while the city’s recommendation is not a surprise to the company, it was surprised by “a ton of inaccuracies” within its pages—including particulars about the project and references to documents submitted by the company.

“We want to make sure they are referencing everything that was submitted accurately, and we can clean up the staff report,” Bart said. “I don’t think the recommendation is going to change necessarily—which we were prepared for because … there’s just not a lot of good zoning classifications for what we do.”

Asked about the discrepancies Bart noted, a spokeswoman for the city’s Department of Metropolitan Development referred IBJ back to the staff report due to its policy of not commenting on active cases.

Even so, Bart said he is hopeful the project will still be able to win approval. He said Onyx+East has met with the city architect in recent weeks to discuss the project, and expects the request will be heard during the Feb. 5 meeting of the MDC.

“We’re working to make some potential changes to the design,” he said. “We’re really just taking the next few weeks to … put in a stronger application.”

Indianapolis-based Rottmann-Collier Architects is the designer on the project.