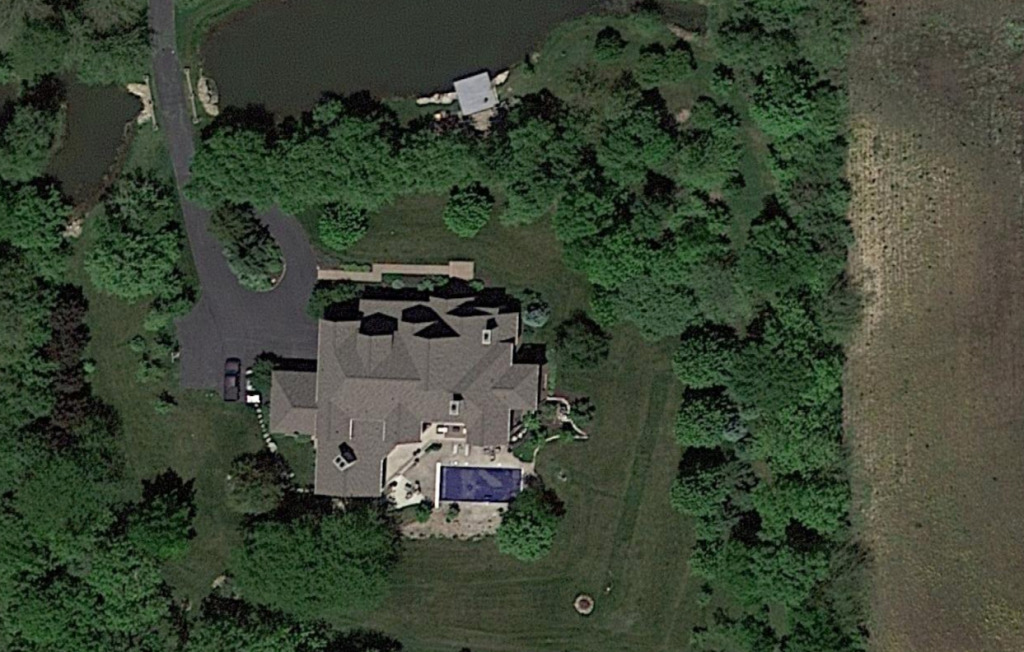 Mike and Karen Pence have purchased this home, which has a Zionsville address. (Photo courtesy of Google Earth)

Former Vice President Mike Pence and his wife Karen have purchased a 7-bedroom, 7½-bathroom house near Zionsville for $1.93 million, a clear sign that national office and the spotlight it brings have financially elevated the couple after years of modest living.

The Pences took out a $1.54 million mortgage on the house, online property records from the Hamilton County recorder’s office show. They paid $130,000 above the list price of $1.8 million.

The 10,349-square-foot house sits on five acres and offers “all the luxur[ies] of life,”  according to a listing on Realtor.com. Amenities include a dock overlooking a pond, a “stunning” in-ground pool at the back of the house that offers a “party-like atmosphere,” a workout room and a ⅓-sized indoor basketball court, the listing says.

The house, which is in Hamilton County and has a Zionsville address, appears to have the restful corners needed to ponder a potential run for the presidency in 2024 and enough flash to entertain potential donors.

The house is a significant step up from the previous homes the couple owned before Mike Pence was elected Indiana’s governor in 2012 and later ascended to the vice presidency as Donald Trump’s running mate—a reflection of the wealth that many former presidents and vice presidents can accumulate from book deals and speaking fees after leaving office.

When Pence began serving as a congressman in 2001, the couple owned a modest 1,447-square-foot brick ranch with three bedrooms and two baths in Pence’s hometown of Columbus. It sold for $147,500 in 2013, according to Realtor.com.

For the past eight years, the Pences have lived in government-provided housing and didn’t own a home. From 2013 to 2017, they lived in the governor’s residence at 4750 N. Meridian St. After he was sworn in as vice president in early 2017, they moved into the official federal residence on the grounds of the U.S. Naval Observatory,  a sprawling 33-room Victorian home built in 1893.

After the Trump-Pence ticket lost re-election to President Joe Biden in 2020, the Pences didn’t own a home in Indiana to move back to, prompting speculation about where they were living in the four months before they bought the Zionsville house. USA Today reported that in the interim they lived in a rented house in suburban Virginia.

The Pences did not respond to requests for comment for this story that were left with the press email address associated with his Advancing American Freedom organization and with another person Republican party officials identified as a Pence spokesman.

Throughout his time in Washington, Pence was considered one of the poorer members of Congress and the executive branch.

During an unsuccessful run for congress in 1990, Pence was even engulfed in a bit of a financial scandal over how he was paying his mortgage. Some voters were surprised to learn that he was using campaign donations to cover his house payment, a car payment and other personal expenses.

The transactions were legal at the time, but the revelation likely contributed to his election loss. Later, the Federal Election Commission adopted rules barring the use of campaign funds for personal expenses.

In his most recent financial disclosure statement filed as vice president in early 2021, Pence listed few assets aside from his Indiana government pension and retirement fund.

A financial windfall is on its way, though. Pence signed a two-book deal with Simon & Schuster in April. CNN reported the value of the deal at between $3 million and $4 million, citing two unnamed sources in the publishing industry. He also recently signed onto the speaker roster for Worldwide Speakers Group, which arranges paying speaking gigs on six continents.

Joel Goldstein, St. Louis University law professor emeritus and an expert on the vice presidency, said Pence seems to be following in the footsteps of the preceding vice president, Joe Biden.

Biden and his wife Jill earned more than $15 million during the two years after the Obama-Biden administration left the White House, mostly from book deals and speaking engagements.

“So it’s not an unusual pattern that people after they leave the presidency or the vice presidency, through book deals or speaking fees, tend to accumulate more wealth than they had before,” Goldstein said.

In addition to book royalties and speaking fees, Pence also stands to collect significant income from his federal and state pensions. In 2019, Forbes estimated he would receive $85,000 a year in government pensions once he starts drawing them. As vice president, he was paid a salary of $230,700 a year.