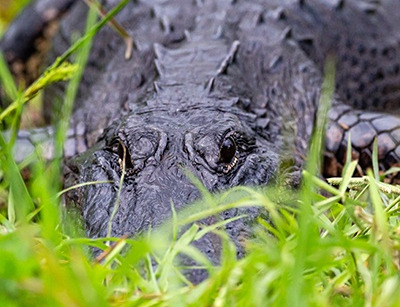 With cool reptilian indifference, the three massive alligators floated in the pond, keeping an eye on the crowd walking around them.

Only occasionally did they push through the water with their clawed feet or armored tails. Content to lounge in the sun, they seemed relatively benign. In reality, these animals had evolved into nature’s perfect killing machine, nearly unchanged since the time of the dinosaurs.

“Any time you see an animal that has a body shape that looks pretty much the same all throughout the fossil record going back 200 million years, that means something is working,” said Lewis Single, deserts area manager for the Indianapolis Zoo. “It’s like working with dinosaurs a little bit.”

Visitors to the zoo have a chance to experience these animals up close with its newest permanent exhibit. “Alligators & Crocodiles: The Fight to Survive” opened May 29 to the public, showcasing two of earth’s most impressive reptiles. The new enclosure offers excellent viewing opportunities from a safe distance, in addition to the opportunity to touch juvenile alligators in special daily encounters.

People can watch the American alligator in a swampy habitat resembling the southeast U.S., as well as see the Orinoco crocodile in a home that mimics the tropical river basins of Colombia and Venezuela.

But besides simply displaying the animals to an awestruck public, the exhibit also tells the conservation stories of two species: one a massive success, the other an ongoing fight for survival.

“These two animals are on very opposite ends of the conservation spectrum,” said Carla Knapp, spokesperson for the Indianapolis Zoo. “We really want to raise public awareness that these species need our protection, and that conservation efforts, when we’re being conscious about what we’re doing, can really make a difference.”

This is the first time since 2006 that the Indianapolis Zoo has dedicated specific exhibit space to crocodilians—the taxonomy that includes both Orinoco crocodiles and American alligators.

Part of the reason that the zoo wanted to bring those animals back was to spotlight how conservation efforts have impacted both species.

The American alligator is one of the most heralded conservation successes in U.S. history. Only a few decades ago, it was considered an endangered species. The animals had been hunted for its skin and meat, and its swampy habitat had disappeared as land was drained and converted to farming.

But through aggressive protections, the alligator population has rebounded. Millions now live throughout the southeastern U.S.

“They’d had protection through the Endangered Species Act, and that’s helped the species rebound over the past couple of decades, to the point where they have a stable population now,” Knapp said.

The opposite is true for the Orinoco crocodile. Hunting and habitat loss have made it one of the world’s most critically endangered reptiles, with fewer than 260,000 mature adults estimated to be left in the wild.

Zoo officials hope that by sharing their disparate fates, people can better understand the peril the crocodiles face, as well as see that conservation can work, Knapp said.

“We can introduce people to animals they may not have ever seen before, and maybe have a fear of,” Knapp said. “By showing them here, in a safe environment where people can observe them, we can alleviate some of those fears.”

One of the ways to do that is to give people a personal experience with the reptiles. People will be able to take part in intimate “meet and greet” sessions with the zoo’s four juvenile alligators, learning from handlers what they eat, how they’re cared for and what they’ll be like as they grow into adults.

The juvenile alligators—Champ, Chomp, Snapper and Swamp—arrived in Indianapolis in February, to allow handlers to become familiar with the animals, and more importantly, let the gators get used to their new home.

“If you brought them from their previous home, and all of a sudden put them out with people, it could be stressful,” “So we had months and months of practice, and slowly got them used to being around people.”

Sara Caruso, interpretation supervisor, has been one of the primary staff members working with the juveniles. As someone who was new to working with reptiles, the experience has been exciting as she’s come to better know the animals’ different traits.

“Being able to see them up close, and seeing this animal that everybody thinks of as this big, indestructible predator, has been really fun. And I think it’s going to be really fun for visitors,” she said.

The three adult male American alligators, and the two female Orinoco crocodiles, are more recent transplants, having just moved to the zoo in mid-May. Indianapolis officials worked with staff at St. Augustine Alligator Farm, where the animals had been living, and arranged to have them brought here.

In between viewing areas for the reptiles, informational displays give people information about the physical differences between crocodiles and alligators, how gators survive in the chilly winter conditions in parts of its habitat, and the maternal instincts of the animals.

“When you see an alligator or crocodile, ‘caring mother’ probably isn’t the first thing that pops in your mind. But it’s true. You see these little juveniles, and they need that protection,” Caruso said.

“Alligators & Crocodiles: The Fight to Survive”

What: A new exhibit featuring the American alligator and Orinoco crocodile, focused on their disparate conservation stories.