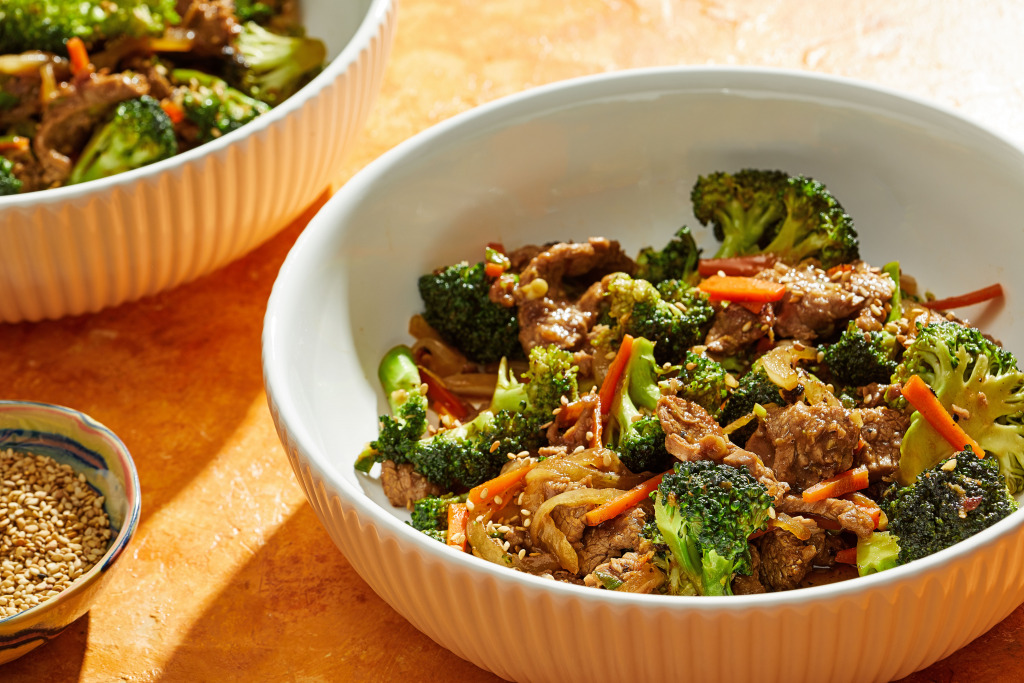 Beef and Broccoli Stir-Fry. (Photo by Tom McCorkle for The Washington Post.)

It’s easy to talk about cooking as a monolithic concept, but there’s so much more nuance to it. You may use one method in a recipe, or multiple. You could have one completely mastered and be terrified of another (hello, me not that long ago, afraid of frying).

I like this simple definition of cooking, beyond the broader notion of just any kind of food prep, from “The Science of Good Food,” by David Joachim and Andrew Schloss with A. Philip Handel: “Cooking is a process of heat transfer from a heat source to food to transform the food into something different.”

It’s also a matter of balance, which I’ll get into in the techniques below. “No matter what you’re cooking, or what heat source you’re using, the aim is always the same: apply heat at the right level, and at the right rate, so that the surface of the food and its interior are done cooking at the same time,” says Samin Nosrat in “Salt Fat Acid Heat: Mastering the Elements of Good Cooking.”

Harold McGee, author of “On Food and Cooking,” says a lot of cooking methods rely on several types of heat transfer. Perhaps the most straightforward are pan-frying and sauteing. In this scenario, the pan conducts heat directly from the source to the food. The speed at which this happens depends in part on the material of the equipment. Better conductors will heat the fastest, though they can also be prone to hotspots or uneven cooking. Per a chart in “The Science of Good Food,” here is a list of common cooking materials, from least to most conductive: glass, stone, stainless steel, carbon steel, cast iron, tin, aluminum and copper. Some pans will mix and match materials to take advantage of the properties of multiple types, such as enameled cast iron (the enamel helps distribute the heat over the cast iron) and stainless steel clad aluminum (aluminum helps conduct heat, but the stainless evens it out and guards against the aluminum reacting with certain ingredients).

These strategies generally involve some but not a lot of oil, over moderate to high heat. In sauteing, Nosrat says to aim for just enough oil to barely coat the skillet (1/16 inch deep), while pan-frying uses a more generous amount, about 1/4 inch deep. McGee says that the oil helps the food come into more uniform contact with the heat, prevents sticking and lends flavor. Sufficient heat under the pan helps immediately dry out the food and brown it, which is why, with a few exceptions (namely enamel and nonstick pans), you typically want to preheat it before adding oil. That also prevents the oil from breaking down and turning sticky or burned. Similarly, try to keep your ingredients fairly dry and spaced apart so they brown quickly and crisp rather than steam. Stir-frying involves fairly high heat, with constant – you guessed it – stirring for even, rapid cooking. Beef and Broccoli Stir-Fry is a prime example. For larger cuts, searing is more about generating flavor through browning via the Maillard reaction than achieving doneness, Nosrat says. Those will then require a more gentle indirect heat to finish cooking. For smaller proteins all you may need is the sear to reach the desired level of doneness.

Shallow and deep-frying can be among the more intimidating ways to cook food – they were for me, at least. Frying in oil is a way to cook using convection, as heat travels in currents throughout the liquid (though the heat is initially transferred from the heat source via the pot by conduction). Here the liquid is fat and not water, as is the case in boiling, which we’ll tackle in the future. In shallow-frying, there’s enough oil to cover the bottom and sides of the food, while deep-frying covers the food all the way in oil, McGee says. One of the biggest advantages of frying is, of course, the crispy exterior, which comes thanks to the fact that oil can get to a much higher temperature than water (frying is often done about 350 degrees), allowing for flavorful browning reactions to occur. Breading and batters provide crunch and flavor and also protect the food from the intense heat of the oil. As in many other cooking methods, frying is about managing temperature and food size to create the optimal conditions that let the interior and exterior cook at an equal pace. Among the keys to successful frying: Maintaining the proper oil temperature (insufficiently heated oil can turn food soggy, too hot and it will burn), using a vessel big enough to prevent boil-overs and meticulously keeping moisture out of the oil, which can cause spattering.

If you’re a frying novice and are worried about those spatters, start with something unlikely to give you problems. Letting breaded and battered foods rest for about 10 minutes before frying can also help eliminate surface moisture and give the starches time to start swelling and gelatinizing so you’re well on your way to crispy perfection.