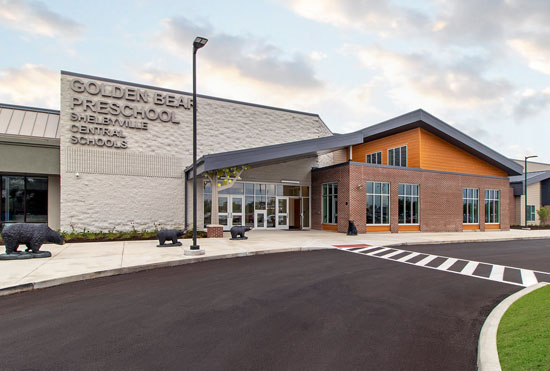 The former Marsh supermarket in Shelbyville has been redesigned as a preschool for the local school district. (Image courtesy of Schmidt Associates)

After sitting vacant for nearly eight years, a former Marsh supermarket in Shelbyville has a new permanent use as a consolidated preschool for the city’s school district.

The 62,000-square-foot building at 1115 E. State Road 44, underwent a $13 million renovation to transform it into the Golden Bear Preschool. The project is split between the 15-classroom school and new administrative offices for Shelbyville Central Schools.

The district purchased the property for $1 million in December 2017, and worked with Indianapolis-based Schmidt Associates to redesign it to accommodate the district’s nearly 270 preschoolers.

The converted building, which sits on 9.7 acres, features indoor and outdoor playgrounds, a kid-sized climbing wall and a bus drop-off area.

Before filing bankruptcy in May 2017, MarshSupermarkets Inc. closed dozens of stores throughout Indiana, leaving gaping holes in various Indiana strip centers. Marsh closed its Shelbyville store—along with stores in Rushville and Connersville—in February 2011, citing the store’s poor performance compared to other locations.

District Superintendent Mary Harper said the district in 2011 began looking at moving preschool students to a single building. (Each elementary school had its own program.) But it couldn’t afford to build new, and the $6 million price tag for the Marsh property was too hefty.

“The timing just wasn’t right. We had architects and talked about plans, but it just wasn’t the right time,” Harper said. “So we just kind of waited.”

Jacque Haynes, a commercial broker at Midland Atlantic, said during IBJ’s Commercial Real Estate & Construction Power Breakfast in September that many of the former Marsh supermarkets in central Indiana are overpriced, which is why only about one-third of the vacant properties have been backfilled.

“I had multiple people interested in [these stores] but financially couldn’t really reconcile with what the lender wanted,” she said.

Harper said district leaders, including then-Superintendent David Adams, continued to advocate for a new home for the district’s preschoolers while they waited for the price to drop.

They also continued building the capacity of the existing program, increasing enrollment from less than 100 to its current level.

Converting a former grocery store to a school isn’t all that uncommon, particularly with the rash of of bankruptcies among big-box retailers in recent years. But that doesn’t mean it’s easy, said Sarah Hempstead, CEO at Schmidt.

“One of the tricks was bringing down the scale of the building,” she said. “Those old supermarket buildings are just a giant big metal box, and they’re not very friendly or warm.”

Hempstead said the redesign of the building included creating a more “human-scale” entrance that was accommodating to the children using it. This included adding a special 4-foot-tall door for the children to use.

Most of the systems in the building—from electrical to mechanical—had to be reworked as part of the renovation, Hempstead said.

“Those systems just didn’t work for the building’s use as a school, so we basically had to start over,” she said. “But with it being a reuse of an existing building, we didn’t have to rebuild the foundation, so that cut down on the overall cost.”

Harper said having the opportunity to convert an eyesore into a community asset was an opportunity the district didn’t want to squander.

“It had been abandoned for so long that it wasn’t really the loss of a grocery store anymore—it was more of an eyesore in the community,” she said. “So any time that you can renovate an existing building like this, I think it’s going to draw business and industry.”

Harper said since the Golden Bear project was announced, the district has received dozens more preschool applications for students around Shelby County.

“Most everyone has a soft spot for little kids,” she said. “So I think people are very excited about it. The community has been super supportive.”

Students have attended Golden Bear since the school year began, but the district plans to hold a grand opening event at the facility on Tuesday from 4 p.m. to 6 p.m.