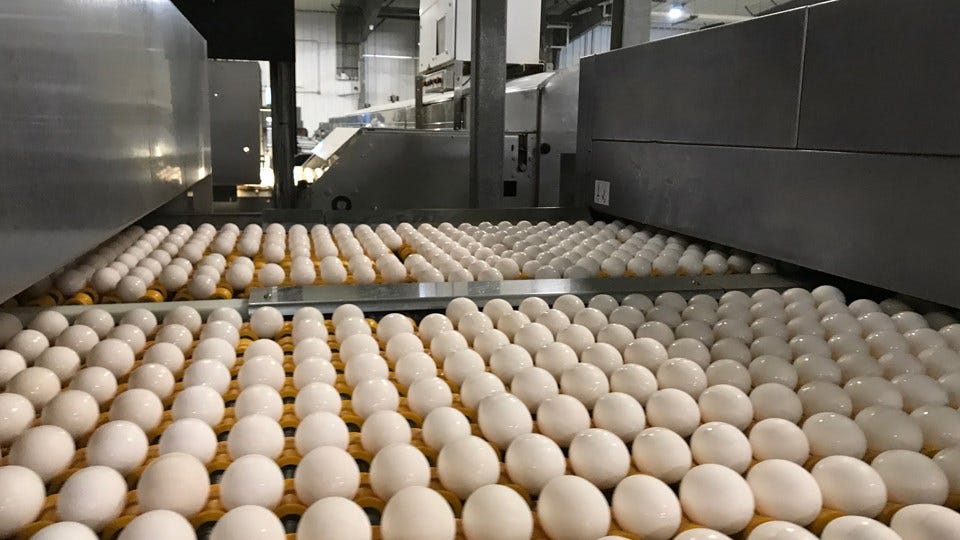 Chickens may not be able to fly very far, but the price of eggs is soaring.

A lingering bird flu outbreak, combined with soaring feed, fuel and labor costs, has led to U.S. egg prices more than doubling over the past year, and hatched a lot of sticker shock on grocery aisles.

The national average price for a dozen eggs hit $3.59 in November, up from $1.72 a year earlier, according to the latest government data. That’s putting stress on consumer budgets and the bottom lines of restaurants, bakeries and other food producers that rely heavily on eggs.

Everyone who approaches the egg case at Hy-Vee grocery store in Omaha, “has a sour face,” said shopper Nancy Stom.

Grocery prices that were up 12% in November are driving inflation higher, even though the overall pace of price increases slowed a bit through the fall as gas prices eased.

But egg prices are up significantly more than other foods—even more than chicken or turkey—because egg farmers were hit harder by the bird flu. More than 43 million of the 58 million birds slaughtered over the past year to control the virus have been egg-laying chickens, including some farms with more than a million birds apiece in major egg-producing states like Iowa.

Iowa is the country’s top egg-producing state, ahead of Indiana and Ohio.

But even with the cost increases, eggs remain relatively cheap compared to the price of other proteins like chicken or beef, with a pound of chicken breasts going for $4.42 on average in November and a pound of ground beef selling for $4.85, according to the Bureau of Labor Statistics.

“It’s still an inexpensive meal,” Stom said. But the 70-year-old said that at these prices, she’ll watch her eggs more closely in the fridge and try not to let them go bad before they get used.

If prices remain this high, Kelly Fischer said she will start thinking more seriously about building a backyard chicken coop in Chicago because everyone in her family eats eggs.

“We (with neighbors) are contemplating building a chicken coop behind our houses, so eventually I hope not to buy them and have my own eggs and I think the cost comes into that somewhat,” the 46-year-old public school teacher said while shopping at HarvesTime Foods on the city’s North Side. “For me, it’s more of the environmental impact and trying to purchase locally.”

In some places, it can even be hard to find eggs on the shelves. But egg supplies overall are holding up because the total flock is only down about 5% from from its normal size of around 320 million hens. Farmers have been working to replace their flocks as soon as they can after an outbreak.

Jakob Werner, 18, said he tries to find the cheapest eggs he can because he eats five or six of them a day while he’s trying to gain weight and build muscle.

Purdue University agricultural economist Jayson Lusk said he believes the bird flu outbreak is the biggest driver in the price increases. Unlike past years, the virus lingered throughout the summer and made a resurgence last fall infecting egg and poultry farms.

“Bird flu is not the only factor, but in my view it’s the main driver of what we’re experiencing at the moment,” Lusk said.

But the president and CEO of the American Egg Board trade group, Emily Metz, said she believes all the cost increases farmers have faced in the past year were a bigger factor in the price increases than bird flu.

Jada Thomson, a University of Arkansas agricultural economist, said there may be some relief coming in egg prices in the next couple months because egg farmers have been steadily replacing their flocks lost to bird flu last year and demand will ease a bit now that people are done with their holiday baking.

But she said bird flu remains a wildcard that could still drive prices higher if there are more sizeable outbreaks at egg farms.

Farmers are doing all they can to limit the spread, but the disease is easily spread by migrating wild birds and the virus can be picked up on clothing or vehicles.

“But there are some things that are just outside of our control,” Thompson said. “You can’t control nature sometimes.”

Food producers and restaurants are hurting because it’s hard to find a good substitute for eggs in their recipes.

Any decrease in egg prices would be welcome at Patti Stobaugh’s two restaurants and two bakeries in Conway and Russelville, Arkansas, because all of her ingredients and supplies are more expensive these days. For some of her baked goods, Stobaugh has switched to a frozen egg product that’s not quite as pricey, but she’s still buying eggs for all the breakfasts she serves.

A case of 15 dozen eggs has gone from $36 to $86 over the last year, but flour, butter, chicken and everything else she buys is also more expensive. Stobaugh said that has her “hyper vigilant about every little item.”

She’s already increased her prices 8% in the past year, and she may have to soon increase them again. It’s a delicate balance of trying not to make it too expensive for people to eat out and hurting sales, but she doesn’t have much choice while trying to provide for her 175 employees.

“We have a lot of employees that work for us and we’re responsible for making payroll every week and supporting their families. We take that very seriously. But it certainly has been tough,” Stobaugh said.