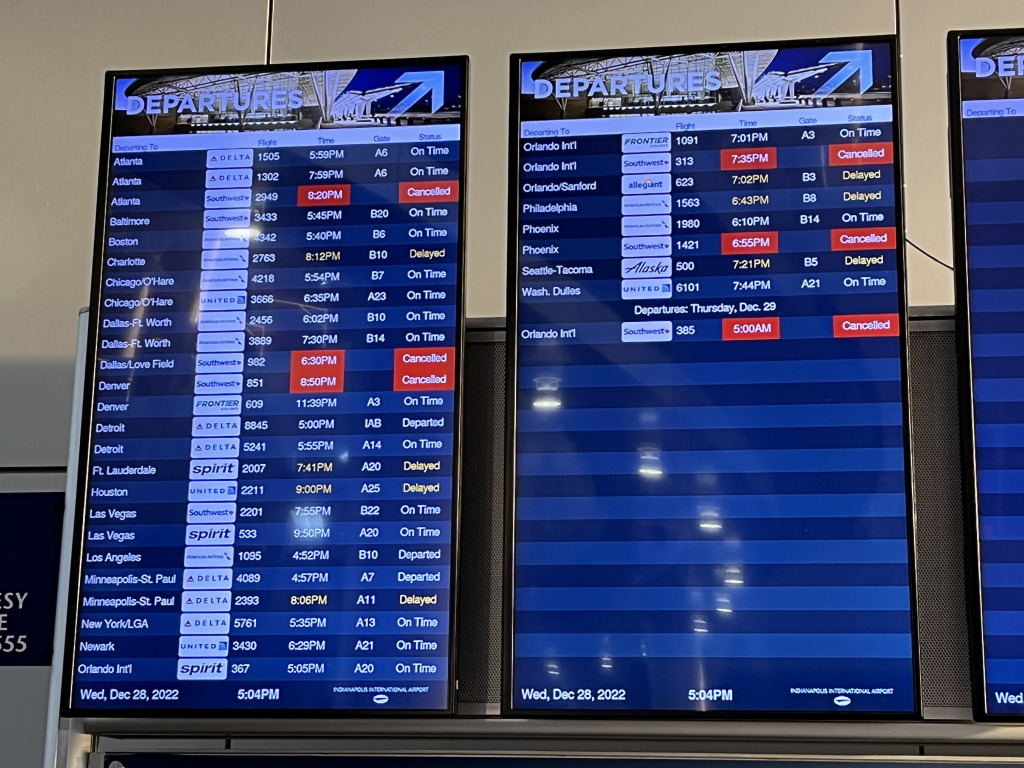 Southwest Airlines’s long recovery from a punishing winter storm and breakdown of internal technology continued Thursday, with the airline once again canceling more than half of its scheduled flights in an effort to hit the reset button on its struggling operation.

The Thursday cancellations were disclosed Wednesday, while early Thursday data from tracking service FlightAware showed few scrubbed flights for Friday. The airline’s chief executive has targeted the weekend for a recovery as New Year’s Eve looms.

As has been the case for much of the week, other major airlines have canceled only a handful of flights Thursday. The 2,359 flights scrubbed by Southwest on Thursday represents 96 percent of all domestic cancellations.

The airline has canceled just 39 flights for Friday, a tally that has been consistent for the past day, according to flight tracker FlightAware.com.

The meltdown of the airline’s operations began when the storm hit Denver and elsewhere last week, then spiraled out of control, overwhelming computer systems that unions representing Southwest employees had warned were at risk of failing. With its unusual point-to-point routing system, rather than a hub-and-spoke system, the airline has needed several days to get crews and planes back in position to resume a normal schedule.

“My personal apology is the first step of making things right,” Green said. “After many plans changed and experiences fell short of your expectations of us, we’re continuing to work to make this up to you.”

The inability of Southwest to recover from the storm, even as other airlines bounced back quickly, has drawn scrutiny from the Department of Transportation and congressional lawmakers, who have pledged to investigate what went wrong.

The problems began in Denver, where an executive warned Dec. 21 that Southwest was facing a worker shortage. Once the airline faltered, it found itself unable to recover.

Southwest executives and union leaders have pointed to aging computer systems that are supposed to help Southwest recover in the face of disruptions, but which couldn’t keep up with the scale of the problems. Pilots and flight attendants have described waiting hours to reach the carrier’s scheduling office and have said managers essentially lost track of where employees were located.

Phillip A. Washington, chief executive of Denver International Airport and the Biden administration’s nominee to lead the FAA, on Wednesday called on three airlines, including Southwest, to take part in an after-action review. Washington said in a statement he wanted to understand their challenges in recovering from the storm.

Tens of thousands of passengers, meanwhile, have faced missed holiday plans, long waits on hold and in airports, and expensive alternative travel.

Southwest has pledged to invest in modernization, but union leaders say they had previously warned the airline’s management of the risks, only to find that their calls for new technology went unheeded.

Green said the airline would also turn to repairing its relationship with passengers.

“We’re focused on restoring the reliability and level of customer experience we expect of ourselves and that you expect from us,” he said.