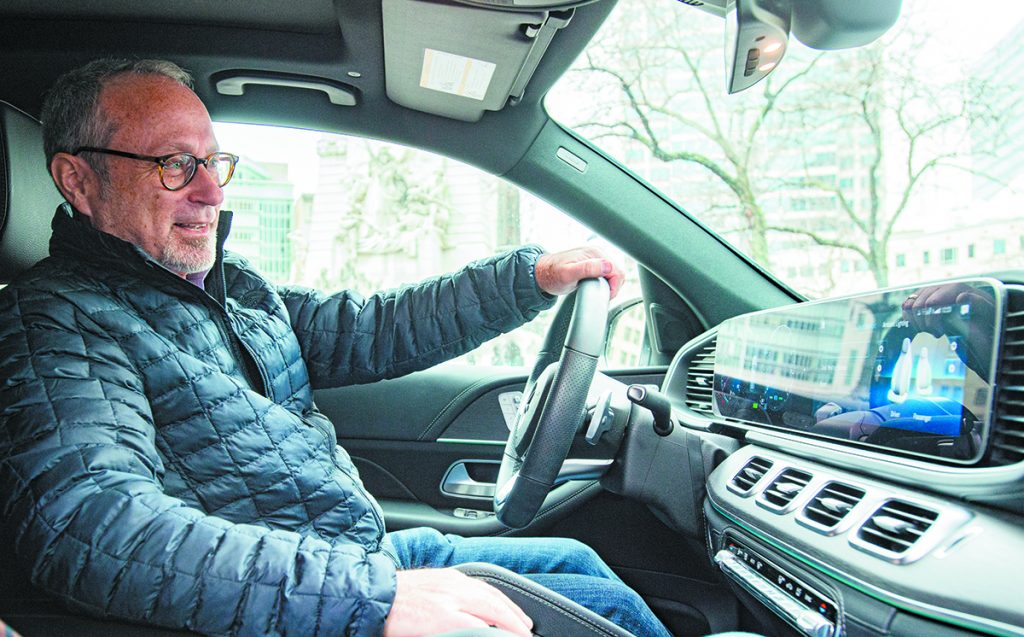 Chiropractor and CMG co-founder Paul Phipps demonstrates the system in a Mercedes-Benz, the first car maker to install it. (IBJ photo/Mickey Shuey)

During a 35-year career as a general agent and managing partner for Northwestern Mutual, Lew Derrickson of Indianapolis spent countless hours traveling to business meetings.

He had no idea his aching back—exacerbated from hours confined to his car—would lead to a second career with a promising tech startup.

Paul Phipps, Derrickson’s chiropractor, had a seemingly simple solution for his client’s driving woes, which persisted despite his car’s 18-way adjustable seat.

Phipps, whose practice is based in Fishers, told Derrickson to set a timer and slightly adjust his seat position every few minutes.

“It was a game-changer,” Derrickson told IBJ.

Phipps scratched his head when Derrickson asked him what he was going to do with that idea.

“I said, ‘Lew, I’m a chiropractor. Tomorrow, I’m going to get up and go see patients,’” Phipps recalled.

Derrickson shot back: “Well, I know what to do.”

He asked Phipps, an expert in performance biomechanics, to put together a proposal, and in 2005, Indianapolis-based Comfort Motion Global was born.

Many of those deals contain non-disclosure clauses, but CMG notably has a deal with German car maker Daimler, which has installed its software in a number of high-end Mercedes-Benz models.

CMG officials said they expect to be able to disclose more customers in the coming weeks and months.

The road to where CMG is now was long and winding, with a few bumps along the way.

The startup is owned by five individuals, including Phipps, Derrickson and Derrickson’s wife, LuAnn. Aside from $1.1 million from the 21st Century Research and Technology Fund, funding has all come from the owners.

The Derricksons put up the initial investment and Phipps suspended his chiropractic practice from 2006 to 2008 to focus solely on CMG. Derrickson took on the role of CEO and Phipps is director of research and development.

Though CMG officials declined to disclose revenue or growth percentage, Phipps said the company is doing so well, the principals aren’t seeking additional funding. Customers pay CMG a licensing fee based on the number of seats using the software.

Currently, the cars that have the auto-movement and seat-position memory functions typically have CMG’s system on the front two seats. The company is working on a system for high-end cars that would enable it to be used on the rear seats as well.

So how does a small Indiana startup get in the door with some of the world’s biggest automakers?

That process took about a decade. It started at Rose-Hulman Institute of Technology and wound its way through Ball State University and Logan University in suburban St. Louis.

Phipps and Derrickson cold-called Rose-Hulman and Purdue University for technical help, and Rose-Hulman called back immediately.

In 2006, Rose-Hulman Ventures assigned a student, tech whiz Christopher Meyer, to help with the project.

Based on Phipps’ idea, Meyer developed software that adjusted the seat every 60 seconds. The key, Meyer said, is an algorithm that moves the seat cushion, back and bolsters (the cushions on the side of the seat) in a smooth and super-slow rhythm. CMG’s software moves the seat at about 10% of the speed used when a driver or passenger electronically adjusts it.

“The movements are slight, and, after a few minutes, imperceptible,” Phipps said.

Phipps joked that, after several months, he returned the rented car, and it had fewer than 200 miles on it.

“They were wondering what we were doing with the car all those months,” he said with a laugh.

“I got to work on a lot of different systems, so it was an exciting opportunity,” he said. “And I’ve gotten to travel the world meeting with executives from some of the biggest companies in the automotive, trucking and aerospace industries.

“The only problem is, when I tell people I’m working on car seats, they think it’s a child [safety] seat,” he joked.

From Rose-Hulman, Phipps and Derrickson went to Ball State for ammunition the startup would need to sell its product to auto behemoths.

The researchers found CMG’s system significantly redistributed body weight over the entire algorithm. It also found that people in CMG’s motion seat reported less fatigue and improved moods than people sitting in a static seat. People using CMG’s seat reported being 73.5% less tired and 32% less achy, and they reported a 46% reduction in overall pain compared to people using a normal car seat, according to the BSU study.

Perhaps most important, the study concluded that people using CMG’s system reacted to road and traffic conditions on average 22 feet before those using a traditional seat.

At Logan University, a college specializing in chiropractic and health sciences, CMG in 2010 further studied its software’s impact on back fatigue and pain. Logan researchers concluded the system greatly reduced muscle fatigue.

“We felt we couldn’t approach car manufacturers without some good, objective research,” Phipps said. “These are laboratory studies where we can isolate our technology and measure the difference. And going in, the schools made no promises about positive results.” 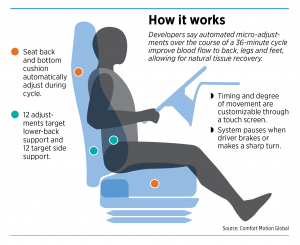 Still, cold-calling big manufacturers is not the ideal approach. Enter another of Phipps’ chiropractic clients, Tom Shine. The two had a chance encounter outside the exam room in 2012, and Phipps told Shine about his project. Shine was intrigued.

The longtime Adidas Reebok executive and Indianapolis-based sports marketer has a thick Rolodex. That file only became thicker when Shine left Reebok Adidas in 2013 to become senior executive for Los Angeles-based XIX Entertainment, which works with some of the world’s biggest sports and entertainment acts and is well-known for its stake in the “American Idol” television show and other global “Idol” properties.

At XIX Entertainment, Shine worked closely with Formula One star Lewis Hamilton, who drove for Mercedes. That created an opportunity.

“I helped them move to the head of the class so they could talk to the bosses,” Shine said.

Shine, who has become a part-owner of CMG, had no hesitancy about vouching for Phipps.

“I have a great deal of trust in Paul,” he said. “He’s extremely competent, and when it comes to his business dealings, he’s always known exactly what he is doing.”

Mercedes-Benz officials saw CMG’s prototype “and immediately liked it,” he said. “They saw that it was simple, but brilliant.” 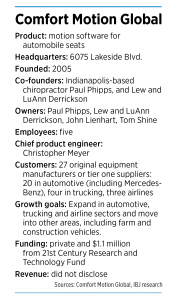 Phipps said Shine opened the doors for CMG with “high-level executives at a number of companies.”

Phipps and Meyer chuckled at the recollection of CMG’s first demonstration. Meyer admitted the prototype was a bit bulky.

It was on a desktop computer that controlled a “giant control board placed in the trunk of the car,” he said. “The second [iteration] control panel was much smaller, the width of a half ream of paper.”

Despite the bulk, Phipps said, “we got a lot of jaw-drops from the auto industry. They understood the problem and quickly saw the validity in our solution. Really, it’s been an easy sell. It’s like when you wiggle around in your seat during a meeting. Now, we’re doing that for you.”

CMG now licenses its software to Mercedes-Benz and other clients, who integrate it into their vehicles’ existing seat-movement systems, which are controlled through touch screens.

Mercedes-Benz had an exclusive deal with CMG through December 2018 and rolled out its first vehicles with the system—in 2020 car models—last year.

Other car makers are now in the process of integrating the system, Phipps said. He anticipates being able to disclose two or three of those customers later this year and he expects more automakers to roll out cars with the CMG system next year and in 2022.

“We have a lot of momentum in the automotive sector right now,” he said. “We know there’s nothing else like this on the market, so it may seem foreign at first. But once it comes out, we’re confident it will become so basic and obviously beneficial to drivers and passengers, it will be as standard as automatic door locks and intermittent windshield wiper movement.

“It will be everywhere.”•