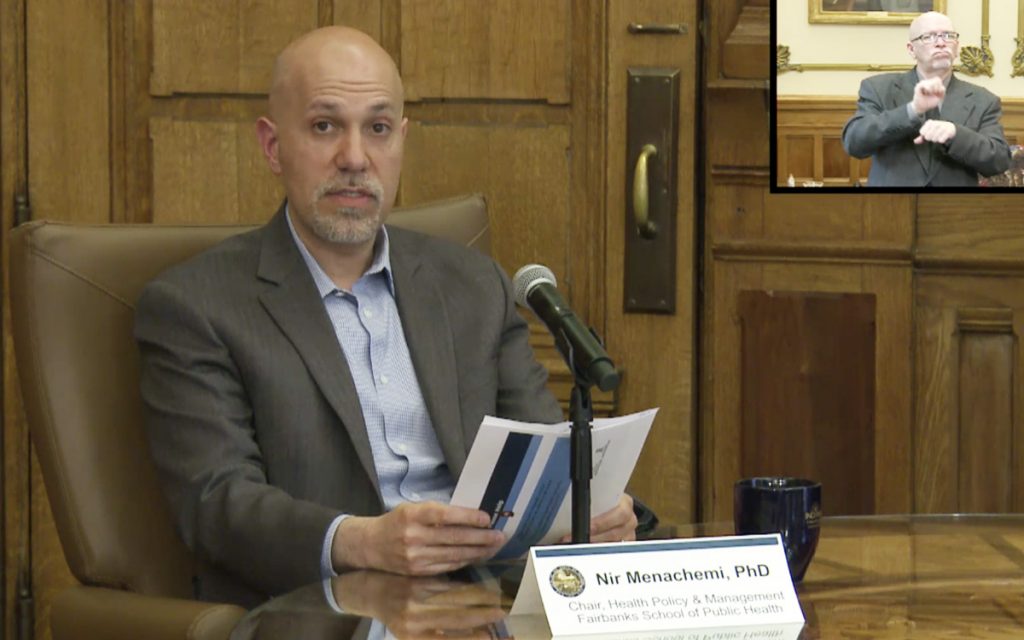 Nir Menachemi, chairman of health policy and management at the Fairbanks School, said that, so far, testing in Indiana has primarily focused on high-risk groups and symptomatic people. (Screen shot of state briefing on April 23)

The state has partnered with the Richard M. Fairbanks School of Public Health at IUPUI to perform a study that should give officials a more accurate estimate of how many Hoosiers are or have been infected with COVID-19.

The partnership between the Indiana State Department of Health and the school will—in its first phase—test at least 5,000 randomly selected Hoosiers representing all demographics and regions for COVID-19 or its antibodies, which would indicate a person had previously been infected.

Testing will begin Saturday and state officials are urging anyone contacted to participate.

The results of the study are expected to be used to guide the state’s ongoing response to the COVID-19 pandemic as well as efforts to reopen the economy. The current stay-at-home order expires May 1, although it is expected to be extended, maybe with fewer restrictions.

Nir Menachemi, chairman of health policy and management at the Fairbanks School, said that, so far, testing in Indiana has primarily focused on high-risk groups and symptomatic people. As such, the state lacks understanding of how many Hoosiers have the disease or have had it.

The study should give officials an idea about the true prevalence of COVID-19 in the state, including those with mild symptoms, he said.

That would be especially important if experts can show that developing COVID-19 antibodies—which happens when someone has the disease—provides immunity for some period to contracting it again. If so, those with antibodies could have the ability to return to more normal activities.

The study will require participants to have a nasal swab paired with a blood draw, and tests will be administered at eight fixed drive-thru sites and at 10 mobile RV sites across the state. The sites include seven Ivy Tech Community College campuses, 46 Walmart stores, Teachers’ Treasures in Indianapolis, Healthy Beginnings in Elkhart, Ascension St. Vincent and Parkview Health.

Because the study is designed to be representative of the state’s population, only Hoosiers who have been selected to participate will be tested. For the first wave of tests, those selected will receive a mailed post card plus a phone call, email or text message requesting their participation.

Phase one testing begins Saturday and is expected to conclude Wednesday. A second wave of testing is planned for May 23 with more waves planned for the fall and next spring.

Indiana is expected to be one of the first states to preform such a study, Gov. Eric Holcomb said when it was announced during a Thursday press briefing.

Menachemi said the study will give the state a head start in understanding the pandemic’s trajectory. Right now, the vast majority of testing data has come from people who are sick or who are at a higher risk of becoming sick.

“What we don’t know is how bad each community within our state is infected or has been infected,” he said. “Again, if we’re only testing people with the most serious symptoms, it seems like we’re only looking at the tip of the iceberg. What our study allows us to do is look below the water and see the entire iceberg and try to get a sense of how large it is and how it’s affecting different communities perhaps differently.”

The state’s health commissioner, Dr. Kris Box, pleaded with Hoosiers selected to participate to follow the directions for signing up. The list of Hoosiers identified to participate includes those 12 and up and was generated from tax filings.

“We need your help,” she said.

2 thoughts on “State, Fairbanks school partner to determine spread of virus in Indiana”