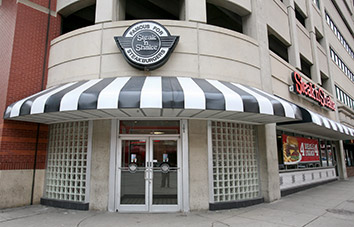 Indianapolis-based Steak n Shake drastically slowed the pace of “temporary” restaurant closures in the third quarter, but showed little progress in its plan to turn company-owned eateries into franchises.

Steak n Shake last year launched an ambitious franchise partnership strategy, saying it wanted to convert all of its 400-plus company-owned restaurants to that model over three years while continuing to expand under its traditional franchising model.

The chain closed 103 restaurants “temporarily” under the strategy in this year’s first two quarters, with a plan to reopen them as franchises. Just three more restaurants were added to the closure list in the third quarter, the company said.

Steak n Shake, however, has reopened only four restaurants under the franchise partnership program since the beginning of the year, all of them in the third quarter.

Steak n Shake revenues have fallen dramatically because of the closures, from $191.2 million in the third quarter of 2018 to $141.4 million in the latest quarter.

Same-store sales declined 6.5% in the period, the 13th decline in the past 14 quarters. Same-store sales represent company-owned restaurants open for at least 18 months.

Same-store customer traffic fell 13.3% in the third quarter, worse than the 8.1 percent decline seen in the first two quarters of the year.

Under the franchise partnership program, Steak n Shake offers would-be entrepreneurs the opportunity to operate a single unit for $10,000. That’s far less than a traditional franchisee would pay, but the single-unit operators have to split profits with Steak n Shake.

Under the company’s traditional model, a franchisee pays a franchise fee ranging from $25,000 to $40,000 as part of an initial investment that varies from about $672,000 to more than $1.8 million per unit, depending on the size and location of the restaurant.

San Antonio-based Biglari reported revenue of $160.2 million, down from $203.6 million a year ago.

The company benefitted from $1.5 million in investment partnership gains in the period after losing $19 million in that category a year ago.

Biglari shares closed Friday at $86.67 each, a 24% decrease since the beginning of the year.