Home » Surprise! Your anesthesiologist was out of network. Now you owe big. 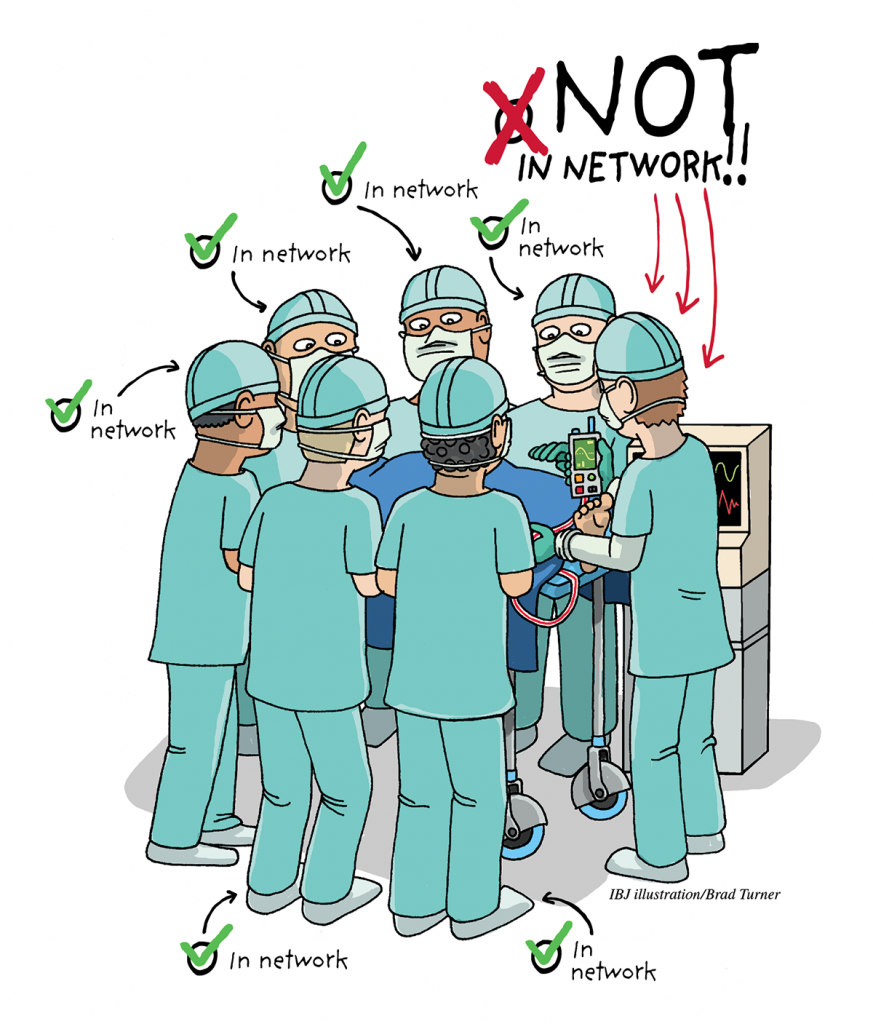 You thought you did everything right before getting that cataract surgery or hip replacement. You checked with your insurer to make sure your surgeon and hospital were in your network.

But did you check to see that the anesthesiologist, radiologist and pathologist were in network? How about the laboratory? Or the rehabilitation care afterward?

If not, chances are you will get a nasty surprise in the mail a few weeks later from one of those out-of-network providers: a bill for thousands of dollars—perhaps even tens of thousands of dollars—for the balance of the bill not covered by your insurance company. Insurers often cover out-of-network providers at lower rates than those in network, and sometimes not at all.

But pressure is building for a federal law that would hold a patient harmless for inadvertently getting the services of an out-of-network provider at an in-network facility. And in Indiana, some lawmakers and patient advocates are pushing for reforms as well.

Across the United States, 16% of all in-network hospital admissions result in at least one out-of-network charge, according to the Peterson-Kaiser Health System Tracker. In Indiana, the number is 7%, less than half the national average.

“But 8% is still a lot,” acknowledged Brian Tabor, president of the Indiana Hospital Association. “It still happens too many times.”

In some states, the figure is much higher. In Texas, for example, 38% of emergency visits result in an out-of-network charge, as do 27% of hospital admissions. Kaiser Family Foundation researchers said the reasons for such wide differences weren’t entirely clear but seem to be related to the breadth of hospital and doctor networks in each state, and the ways in which those networks are designed, the Associated Press reported.

In one of the most famous cases, a concert pianist from New York City who needed spinal surgery carefully researched which surgeon to use. The surgeon was listed in the pianist’s insurance plan, and a patient coordinator confirmed the coverage, according to The New York Times. But after the operation in 2012, the insurance company told her the doctor had dropped her plan a few years earlier. She received a bill for $101,000 and her insurance paid only $3,500, leaving her with a surprise balance of $97,000.

The pianist, Claudia Knafo, said she considered bankruptcy and divorce before officials with the New York Attorney General’s Office and the state’s Financial Services Department intervened.

Some health experts say those kinds of stories are not uncommon. Paul Halverson, dean of the Fairbanks School of Public Health at IUPUI, said a friend of his family wound up with an $86,000 bill after surgery, due to an out-of-network surprise.

“And I think that sort of shocks our consciences,” Halverson said at IBJ’s Health Care & Insurance Power Breakfast on Sept. 26. “Something is out of whack and needs to be fixed. I do think we need to provide some fundamental fairness and protection for patients.”

Many patients have no idea of all the back services involved in a procedure, even if their hospital and doctor are in network, said Leesa Ackermann, a patient advocate and registered nurse in Fort Wayne.

“When you go into surgery, you don’t ask, ‘Hey, is the anesthesiologist in my network?’” Ackermann said. “Most people don’t even think about it.” 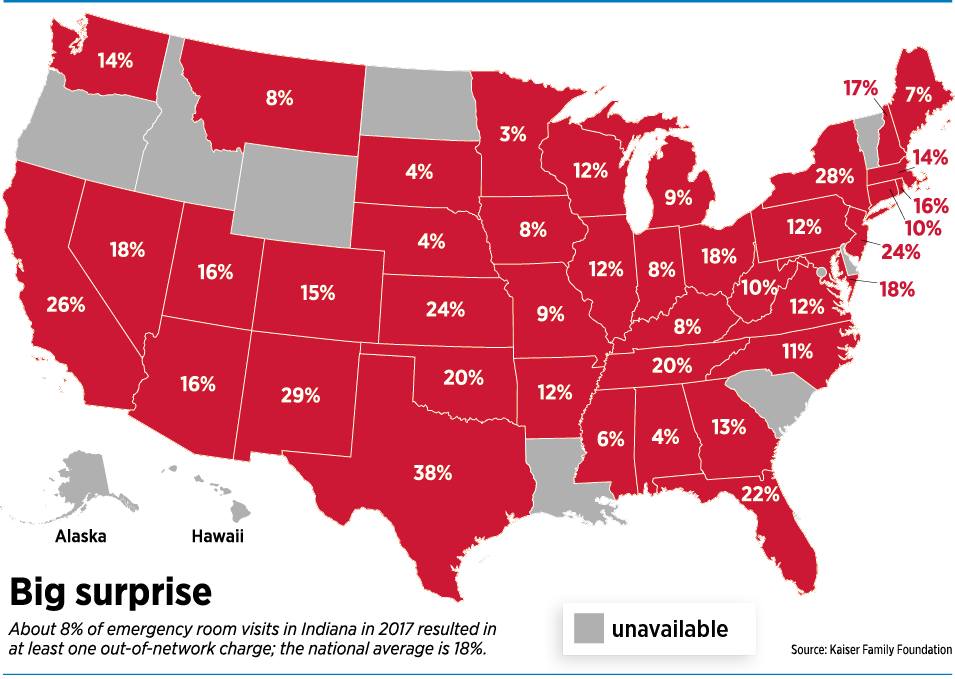 Some states offer sweeping protections, including measures that hold patients harmless for surprise bills greater than the patient’s deductibles, co-pays or coinsurance. Others offer a dispute-resolution process.

But Indiana offers only the barest of protections. Under a law that took effect in 2018, physicians who refer patients to other providers must provide a notice to the patient stating that an out-of-network provider might be called upon to render services, and those services are not bound by the in-network payment provisions under the patient’s health plan. The notice also must tell the patient he can contact his insurer to obtain a list of in-network providers.

“When our consumers go to an in-network hospital, they should not have to worry if the care they are receiving is being performed by a hospital-based physician who is out of network. … This is a step to help them make informed decisions about their care,” Anthem spokesman Tony Felts said in a statement.

He added: “Anthem is constantly working with its in-network hospitals to ensure that all physicians who are performing health care services within those hospitals are in-network providers.” 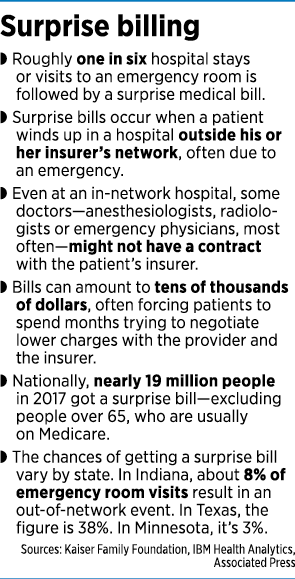 In June, Anthem cut payments to some California physicians as part of what it called a routine adjustment to fees. California physicians say the move was the result of a 2016 state law that keeps patients from being forced to pay the difference when insurance companies and care providers clash over health costs, Bloomberg reported. Anthem said the reimbursement changes were unrelated to California’s law and that it increased pay for some clinicians.

The Indiana Hospital Association said it favors stronger patient protections, similar to measures recently adopted by New York, Texas and other states, that would hold the patient harmless in such cases, and force the provider and the insurer to agree on a price for the uncovered part of the bill. Tabor, the Indiana Hospital Association’s president, said his members are trying to drum up support in the Indiana General Assembly for such a bill in the next year or two.

“We’ve had numerous conversations,” he said. “We are certainly making it known that we would support such a bill.”

Those discussions included testimony this summer at a legislative study session on how to contain health costs. Also speaking at the session in favor of additional consumer protections over surprise bills were officials with the Employers Forum of Indiana and the Indiana Federation of Ambulatory Surgical Centers.

Some groups favor a “baseball-style resolution,” a term borrowed from Major League Baseball’s salary-dispute process, where the player and the team get a chance to name an appropriate salary for the player. An arbitrator picks one of the two numbers without modification, a process that encourages both sides to keep their requests reasonable or risk having the arbitrator pick the other party’s number.

In the case of surprise medical bills in New York and some other states, the arbitrator chooses the number offered either by the provider or the payer, based on a number of factors, including the physician’s level of training and experience, the complexity of the particular case, and usual and customary cost of the service. Arbitrators make their binding determinations within 30 days.

A recent study by Georgetown University of disputed surprise bills in New York found that 618 cases were decided in favor of insurers, and 561 in favor of providers.

“There’s been wide industry support for this model, since it incentivizes the parties to offer reasonable proposals to the arbitrator and it takes the patient out of the middle,” said Lucy Lucido, a health care attorney with Indianapolis-based Hall Render Killian Heath & Lyman, in a September webinar on surprise billing.

Putting a stop to surprise bills has become a priority for the Trump administration, and several bills are making their way through Congress, with bipartisan support, that would offer patient protections.

But hospitals and doctors want disputed bills to go to arbitration. The Indiana State Medical Association, the state’s largest physician organization, with more than 8,200 members, said it would support federal legislation that includes an independent resolution process for physicians.

The ISMA joined the American Medical Association and more than 100 other U.S. medical organizations in signing a letter in July that requested such a procedure for hashing out disputes. The U.S. House Energy and Commerce Committee has approved a version of the legislation that pegs physicians’ out-of-network reimbursements to local benchmarks, but with a “backstop” arbitration option for amounts of $1,250 or higher if the benchmark resolution isn’t acceptable to both parties in a given case.

Complicating the situation is a highly polarized political landscape in Washington that recently got even hotter as the U.S. House of Representatives kicked off an impeachment inquiry against Trump. That has made it difficult to handicap whether any versions of surprise-billing legislation make it through Congress before the November 2020 election.

“The clock is ticking,” said Andrew Coats, a senior policy adviser for Hall Render, in the webinar to clients and media. “As you know, every day that passes, we get a little closer to the 2020 election.”•

5 thoughts on “Surprise! Your anesthesiologist was out of network. Now you owe big.”