Home » The Art of Design: Good things in small packages 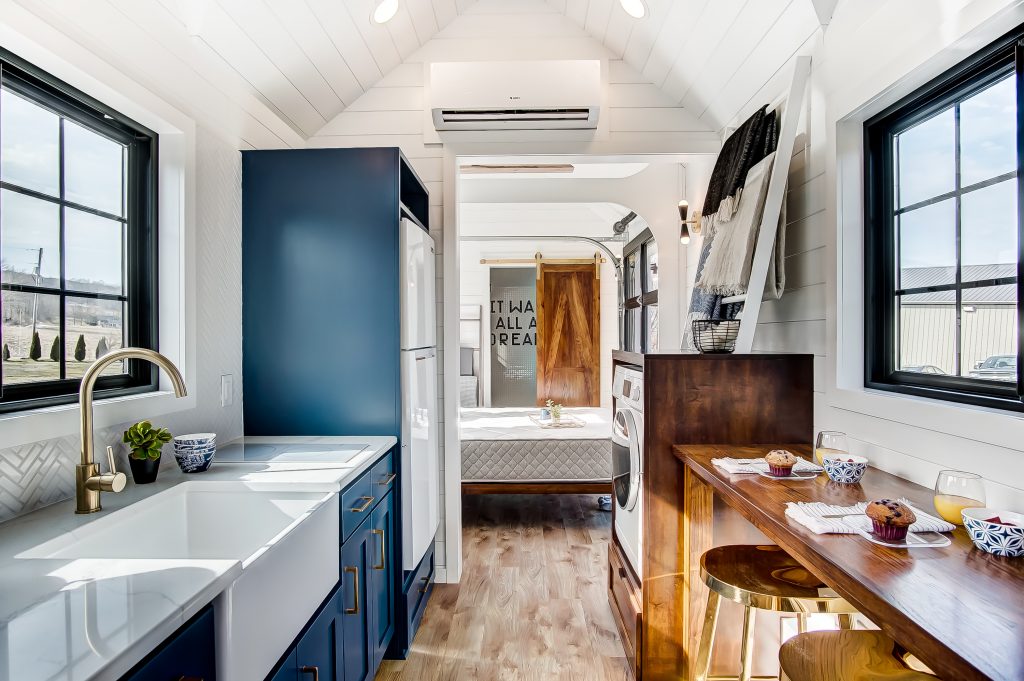 Small houses—like this tiny house—need to have furniture pieces that do double duty. (Photo courtesy of Allswell)

The saying goes that “Good things come in small packages.” That is true when it comes to perfume and jewelry, but in regard to real estate, it’s something completely different. Everyone always wants more space, but it is amazing to compare what is considered adequate living space is different places around the world.

In the United States, an average home is 2300 sq. ft., which is considered the norm—but size is also dependent on where in the U.S.

Designing a small home has its challenges. But believe it or not, the opportunities that a small home can offer are amazing. Sometimes pocket-sized spaces are able to make the most of design. To live in a small space requires a very clear idea on how to live and how to decorate.

First tip for decorating a small space is to consider the space in terms of multi-tasking potential. For example, this could mean using a sofa as everyday seating during the day, as a dining banquette at times and as a bed during the night. With that could be a dining table that doubles as a dining table during meals, then as a desk when needed and as an area to stage projects or work at others.

The second thing to take into consideration is the fact that storage is always lacking in small spaces. One must look to every nook and cranny for viable places to store things. Under furniture, behind drapery, and vertical space need to be investigated to make small spaces work. Sometimes this means giving up expected furniture such as nightstands in favor of chests or bookcases. Boats offer a great lesson for those decorating small areas, where there is a dedicated area for everything and no room for wasted space.

The third thing to consider is that contrary to the belief that one larger space is better when it comes to separating functions, which is an important component of small spaces. Sometimes the layout of a small space has too many walls, but on the other hand those walls may offer the psychological idea of more space. When walls are lacking, the idea of space may be created by hanging floor to ceiling drapes, which create the illusion of walls.

The fourth tip is about imagining space. I am not a promoter of walls of mirrors, but mirrors are another source when designing in tight quarters. Strategically placed mirrors can create the vision of more space. They can actually make it seem as though there is more space by reflecting a window or reflecting existing doorways to multiply the number of architectural openings.

Ultimately, small spaces should be approached with outside the box creativity. The most successful small spaces are the ones that make you think “Oh, I would have never thought of that!”