Home » Virtual health care grows, but usage is uneven and some patients, physicians are slow to adopt 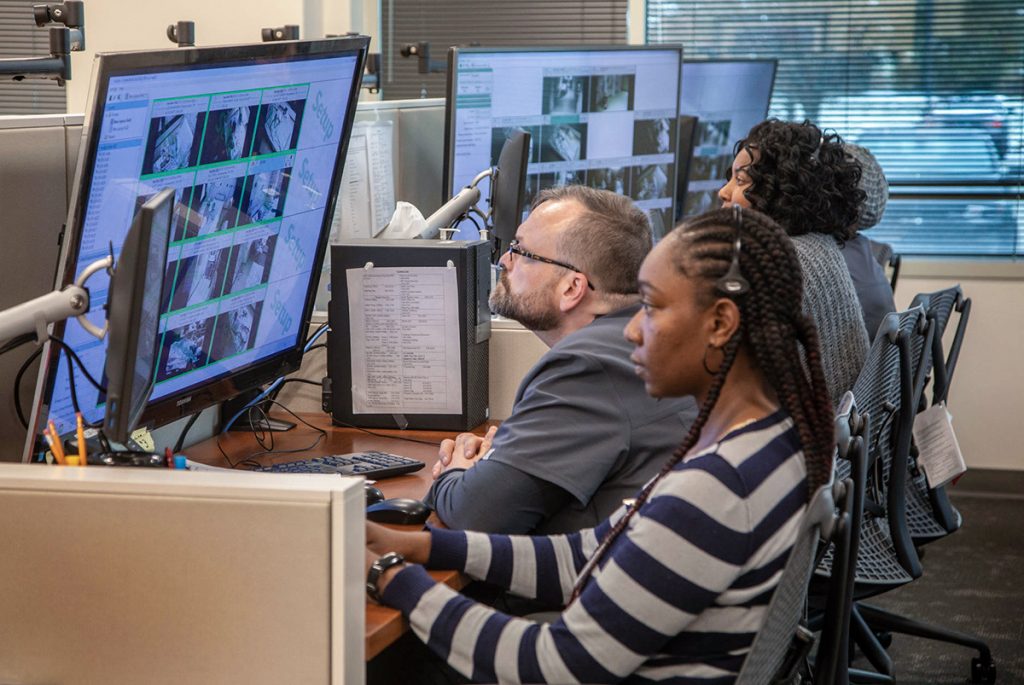 Allison Swanton, a nurse and clinical case manager for Ascension St. Vincent, was scrolling through patient charts at her computer when she noticed a red alert flashing on her screen.

An 80-year-old patient with diabetes and heart problems who was taking her own vital signs at her west-side home was showing extremely low blood pressure, 84 over 70, and had gained three pounds overnight.

Swanton picked up the phone at her desk in the health system’s “command center”—a centralized hub for virtual medicine on West 96th Street in Carmel—and called the patient. “Your blood pressure is low today. Did you notice that? Are you feeling dizzy or lightheaded or anything?”

The patient, a bit surprised by the call, said she was feeling fine, but agreed to recheck her blood pressure with a cuff that connected to her computer, miles from the nurse. A few minutes later, the woman reported that her blood pressure was actually 162 over 66, and the first reading was wrong. Then Swanton asked the woman about her weight gain. “Do you notice any increased swelling or shortness of breath?”

A few minutes later, satisfied that the patient was fine, Swanton wished her a good day and hung up, jotting notes on her computer. 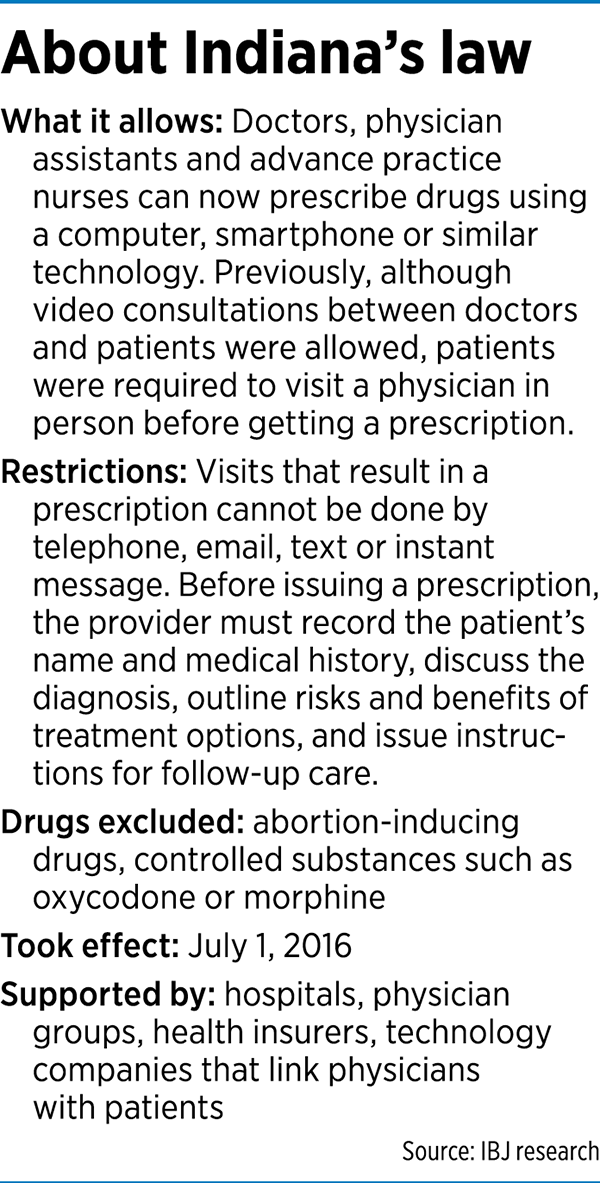 One desk over, case worker Marni Hendricks-Rockey called a patient who had a history of congenital heart failure after noticing her pulse was elevated and her weight had climbed from 307 to 313 in six days. This patient, too, was at home, and had taken her vital signs with a series of devices hooked up to her computer, which sent them to the case workers to examine.

Inside this hub, about the size of an Aldi grocery store, dozens of nurses, technicians and administrators keep tabs on hundreds of patients a day across Indiana at their homes and in hospital beds, with the use of remote technology, computers and smartphones. Doctors, meanwhile, are seeing patients remotely to follow up on surgeries, deal with minor injuries, monitor for chronic diseases or evaluate for psychiatric problems.

It’s part of the growing trend of virtual medicine, a $21 billion worldwide industry that promises to overhaul health care, cutting down on the number of times a patient has to travel to a doctor’s office for minor concerns and follow-up care, while increasing medical access for people in remote, rural areas. In the process, virtual health is hailed as a way to cut billions of dollars from the nation’s health care spending by reducing the number of adverse events and hospital admissions.

Three years after Indiana passed a law allowing doctors to prescribe drugs for patients without an in-person visit—using a computer, smartphone, video camera and similar technology—some health systems around the state are reporting higher use of virtual visits. St. Vincent, for example, sees hundreds of patients a month remotely for ailments ranging from minor rashes and sprains to follow-up visits for strokes.

Yet some administrators say they are surprised that more patients and doctors aren’t taking advantage of the technology.

“We’ve been surprised at how low the numbers have been, and how slow the uptake is,” said Cindy Adams, chief nursing officer at St. Vincent. “This whole consumer migration to virtual health, we’re just not seeing it.”

Franciscan Health is seeing about 200 telemedicine visits a month, up from just 10 or so in 2016. “It’s grown quite a bit, but it’s still nothing close to our overall volume of seeing patients in person,” said Chris DiGiusto, vice president of ambulatory services and virtual health.

Some smaller health systems, such as Johnson Memorial in Franklin and Eskenazi Health in Indianapolis, said their use of telemedicine is either too small to talk about or not even off the ground yet.

“Our new CEO definitely embraces the technology and it is part of his future plans, but currently we aren’t using it,” said Jeff Dutton, a spokesman for Johnson Memorial.

On the other end of the spectrum, Indiana University Health said it is racking up robust growth. Just two years ago, the system did about 1,000 telemedicine visits. This year, it is on track to do more than 7,000, and has trained about 700 physicians on the technology, said David Kogan, the system’s vice president of retail health services.

“I would say it has been very positive,” Kogan said. “The trend forward will be clearly using more virtual technology.”

Nationally, the use of telemedicine has climbed sharply—up about 340% from 2015 to 2019, according to a survey of 800 physicians earlier this year by American Well, a privately held telemedicine company based in Boston. Today, 22% of physicians have used video visits, up from just 5% four years ago.

But not all medical specialties are embracing virtual health, the survey found. Psychiatrists, neurologists, urologists and pediatricians are more likely to use remote technology—often in follow-up visits or to monitor patients with chronic conditions. On the other end, cardiologists, radiologists and dermatologists are less likely to use it.

Some medical situations, of course, are not suitable for remote treatment, including surgery, trauma care, critical care or other hands-on situations. But for those patients who get treated in a trauma center or undergo an operation, they could eventually be suitable for remote follow-up care after discharge.

Other situations seem tailor-made for a remote visit, such as minor injuries that don’t require an emergency room visit. Many health systems in Indiana have apps or other virtual entryways where patients can register and request to see a doctor remotely. Once they type in some basic information, they are placed in a virtual waiting room until a doctor is available, usually within a few minutes.

Dr. Anne Gilbert, a psychiatrist at IU Health, said she uses telemedicine almost exclusively, and has found many patients are fine with chatting about their behavioral health via computer and video camera. Many who are in rural towns prefer to chat with a doctor hundreds of miles away rather than seeing a psychiatrist locally whom they might run into on the street, she said.

“Maybe the therapist in their town goes to their church,” said Gilbert, who is also medical director of IU Health’s virtual care behavioral health unit. “These are small communities. [Patients] like the anonymity of connecting with someone that they’re not going to run into at the grocery store the next day.”

Another patient, being seen for anxiety, told her he felt more able to open up and talk freely via remote technology. And some patients get stressed out if they have to leave their homes and travel long distances to a doctor’s office.

In addition, telemedicine has allowed IU Health to expand emergency care to psychiatric patients who show up in one of the system’s many emergency rooms around the state exhibiting symptoms of psychosis or suicidal thoughts.

In the past, IU Health would have to ship them to one of its big hospitals—Methodist, Bloomington or Ball Memorial—for a behavioral health evaluation. Now, psychiatric patients in any of IU Health’s emergency rooms can be evaluated remotely.

Franciscan Health, too, uses telemedicine heavily in behavioral health, accounting for about half of all telemedicine visits, officials said. Some of it is for crisis intervention in the emergency room: When a psychiatrist is not in the hospital, Franciscan can patch in a psychiatrist from another city to talk to the patient and make an evaluation.

Telemedicine is, in fact, just one part of the broader world of virtual health, which also includes videoconferencing among physicians; internet chat rooms for patients who need coaching or peer support; and technicians monitoring patients by video cameras, sometimes hundreds of miles away.

How the technology is used depends on the setting. In one corner of Ascension St. Vincent’s command center on a recent day, two technicians kept their eyes glued to large video screens that showed dozens of video images of hospital patients in bed. Some patients were at the health system’s West 86th Street flagship hospital; others were at hospitals around the state.

The patients, mostly elderly, were deemed at high risk for falls, and a video camera in their hospital rooms beamed images into the command center that allowed the hospital to keep an extra set of eyes on the patients when the nurses were out of the room.

Those patients could be recovering from surgery, or be under general observation, or have behavioral health challenges, said Pam Heckman, a nurse and vice president of operations at the command center. If a patient tries to get out of bed while the nurse is out of the room, a technician in the command center can sound an alarm at the nurse’s station.

“The primary reason we watch is to prevent falls,” she said, as she looked over a technician’s shoulder at the dozens of images on the screens.

In another part of the room, workers kept tabs on hundreds of patients dealing with diseases that require ongoing medical attention, such as diabetes, asthma, heart disease or multiple sclerosis. Many were at home or going about their daily lives but could send in their vital signs regularly with a range of devices, from blood-pressure cuffs to glucose monitors.

One of the promises of virtual medicine was that it would yield substantial cost savings by diverting patients away from emergency rooms and other high-cost settings into alternative locations, such as a patient’s living room. It’s unclear how much money is actually being saved. A study earlier this year, using data collected from 650 patients who used a telemedicine platform at Philadelphia-based Jefferson Health, estimated patients saved $19 to $120 per visit. The cost of a visit on the system’s “JeffConnect” telemedicine platform was a $49 flat fee. The bulk of the savings came from keeping patients out of emergency rooms.

A survey last year by Regence, which administers Blue Cross and Blue Shield plans to some 2.4 million members across the Pacific Northwest, found a typical telemedicine visit can save the consumer about $100, factoring in travel costs and the amount of time spent waiting for care at each site.

A 2017 study published in the journal Health Affairs, meanwhile, found the convenience could tap into unmet demand for health care, increasing the nation’s overall health spending. The study, which examined commercial data claims on more than 300,000 patients from three years, found that only 12% of the telemedicine visits replaced traditional office visits, and that 88% represented additional visits.

“Telehealth may increase access by making care more convenient for certain patients,” the study concluded,” but it may also increase utilization and health care spending.”

At several health systems in central Indiana, including IU Health, a virtual visit with a doctor costs $49—substantially less than a typical office visit.

That financial benefit alone will drive more usage, health care observers say, as will the convenience.

“As technology continues to evolve, and people get more familiar with how it works, the potential upside is huge,” said Kogan at IU Health. “In many cases, it may not be considered transformational today, but we certainly have to contemplate what it means for the future.”•