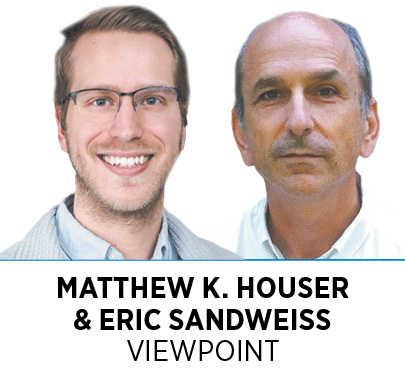 When Hoosiers run out of meaningful things to say, they resort to the weather. The familiar cliches at least give us something that—unlike politics—we can all agree on.

Except when we can’t. A recent climate survey sent to 10,000 Hoosier households by Indiana University’s Environmental Resilience Institute revealed political divisions so entrenched that Indiana residents with differing party affiliations no longer even appear to agree about the weather.

A South Bend winter is nothing like an Evansville winter. But our Hoosier Life Survey showed that even residents of the same city view their local climate through red or blue lenses. Indianapolis Democrats, for example, were three times likelier than their Republican neighbors to report an increase in heavy rains. Indy Democrats were also more than twice as likely to report increasingly hot weather.

What’s going on here? Social scientists have long noticed that Americans’ attitudes about the environment divide along party lines. Republicans and Democrats turn to different sources for news, carry unique values, and follow cues from their own party’s leadership.

Environmental change is so inflected with political meaning that, when university-based researchers ask Hoosiers about their experiences of environmental change, many will—quite reasonably—think, “You’re asking if I believe in ‘global warming,’ right?” Their responses, then, come framed in the political context that has, for years, dominated what would otherwise be a matter for scientific hypothesis and empirical confirmation.

Still, some good news comes out of our version of the age-old, “How ’bout the weather?” question.

First: Women and young people align more closely across party lines than does the population as a whole. Asked whether they agree with the scientific consensus that human activity is the primary driver of our changing climate, Indiana Democrats were three times likelier to say “yes” than were their Republican neighbors. Yet among Hoosiers under the age of 30, that party difference narrowed to a factor of just over 2-to-1. To cite a similar example, just one in four Republican Hoosier men believes changes in the climate are harming Americans today. Ask the same question of Republican women, and the ratio narrows to one in three.

Second: When you stop asking broad, politically charged questions—and instead focus on what people support for themselves and their families—you begin to see how much brings us together. Hoosiers might be too busy swatting mosquitoes to worry about the political implications of local government spraying to kill the pests—so they support such a proposal in nearly equal measure across parties. Solar energy polls surprisingly well, too—with a majority from both parties favoring public funding to subsidize solar panels on Hoosier homes.

How to pay for such initiatives? Here, too, party difference becomes less important than practical problem-solving. A majority of members of both parties, if faced with the necessity of a solar-subsidy tax, would consent if its burden fell on families earning more than $165,000 (three times the state’s household median). By even larger majorities, both sides would support the tax if it were aimed strictly at companies responsible for greenhouse-gas emissions.

The implication is clear: With so much at stake, let’s focus on what’s happening and what we can do instead of the bigger-picture questions that divide us.•

Houser is a fellow at the Environmental Resilience Institute and an adjunct assistant research scientist in the Department of Sociology at Indiana University. Sandweiss teaches history at IU.