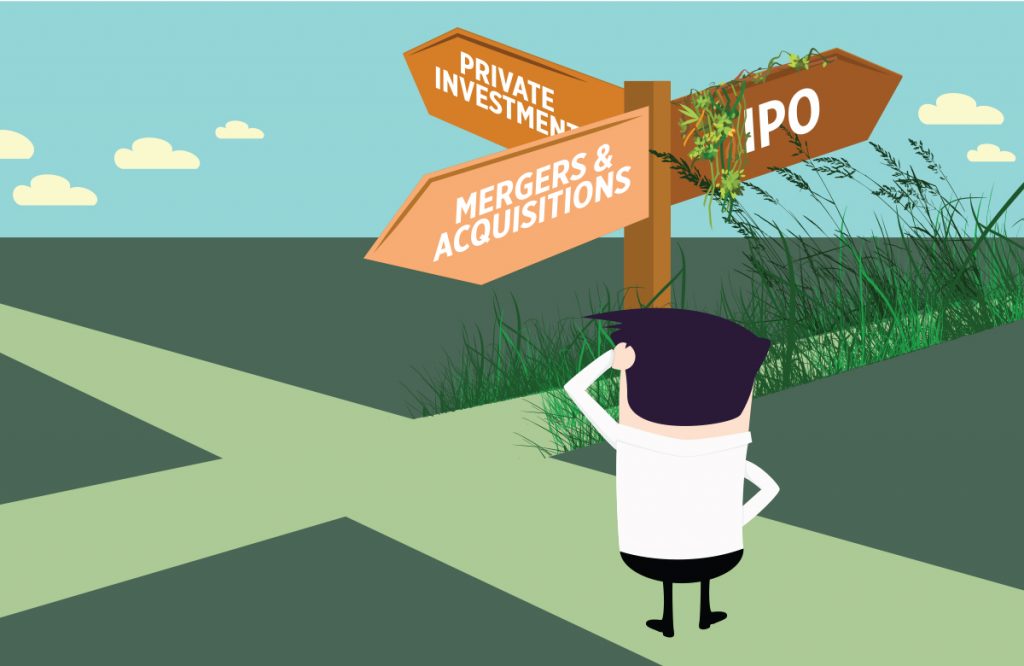 To borrow a phrase from conservationists, the Indiana-based public company is a species in decline.

For various reasons, the number of Indiana-based public companies has shrunk dramatically over the past 30 years—although observers offer mixed opinions on whether this trend is a cause for concern.

A search of the EDGAR Online database of public company filings shows that, in 1990, 121 Indiana-based public companies filed 10-K annual reports, a financial requirement for publicly held companies. In 2019, that number had dropped to 56.

Numerous factors are driving this trend—including the increased regulation of public companies at a time the availability of private sources of growth capital has exploded. It all adds up to fewer companies interested in filing initial public offerings and selling shares to the public—once considered a rite of passage for up-and-coming firms.

Some Indiana companies on the 1990 list dropped off the 2019 list because they were acquired in the interim—Indianapolis-based Wholesale Club Inc., for instance, was purchased by Walmart Inc. in 1991. Others, such as Evansville-based Atlas Van Lines Inc., exited the ranks of publicly traded companies by going private. Still others, including Indianapolis-based Marsh Supermarkets Inc., Evansville-based Integra Bank Corp. and Columbus-based Irwin Financial Corp. went out of business.

And companies aren’t going public at the same rate as in the past. As companies drop from the ranks of the publicly traded, fewer new public companies are taking their place.

“In the last few years, the process of going through an IPO has become an expensive process, and the defined benefit isn’t nearly as great,” said Dwight Burlingame, an IUPUI professor who has followed the trend as he monitors corporate charitable giving.

“There’s been a definite trend of more private companies, and even some public companies going private, ” said Burlingame, a professor of philanthropic studies at the Lilly Family School of Philanthropy.

The proliferation of funding options since the Great Recession is one big reason fewer companies are choosing to go public.

Private equity firms, which invest in companies with the goal of growing the businesses and reaping profits, have raised so many billions of dollars from investors in recent years that they can’t find enough companies to invest in, said investment banker Tim Trostle, a director at BKD Capital Advisors’ Indianapolis office.

This means companies in need of capital have more chances than ever to secure private funding.

“There’s more money chasing not enough transaction activity,” Trostle said. “If you’re of a sufficient level of quality [as a private company], you get a lot of attention.”

According to the financial-data firm Preqin, private equity and venture capital firms as of the end of 2019 were sitting on $1.45 trillion of “dry powder” to invest, double their cash stash five years ago.

And many companies are also flush with cash, meaning they have the resources to take ownership stakes in other companies—or purchase them outright.

All these funding sources provide options for raising capital without all the public-company challenges, including the quarter-by-quarter pressure of meeting investors’ sales and earnings expectations.

And going public is a more complicated and expensive process than it used to be.

The federal Sarbanes-Oxley Act of 2002—enacted in the aftermath of a rash of corporate scandals, including Enron, Tyco and WorldCom—imposed a host of new regulations on public companies.

Filing an IPO and going public also requires that a company divulge its financials and expose other details of its operations, warts and all.

That’s a lesson the highly touted office leasing company WeWork learned this summer after it filed to go public. Disclosures about the New York-based company’s business practices and losses forced the cancellation of its IPO and sent the company into a tailspin.

“If you go the IPO route and it’s not successful … . There’s some risk with that,” Birge said.

In contrast, he said, a company raising money through private investors need only share its financial details with a small circle.

Also slowing IPO activity is the reality that, in today’s fast-paced business environment, a suitor often comes calling before companies are big enough to even consider going public.

“The technology model today is to start up the business and wait for it to get bought,” said Michael Hicks, director of Ball State University’s Center for Business and Economic Research. 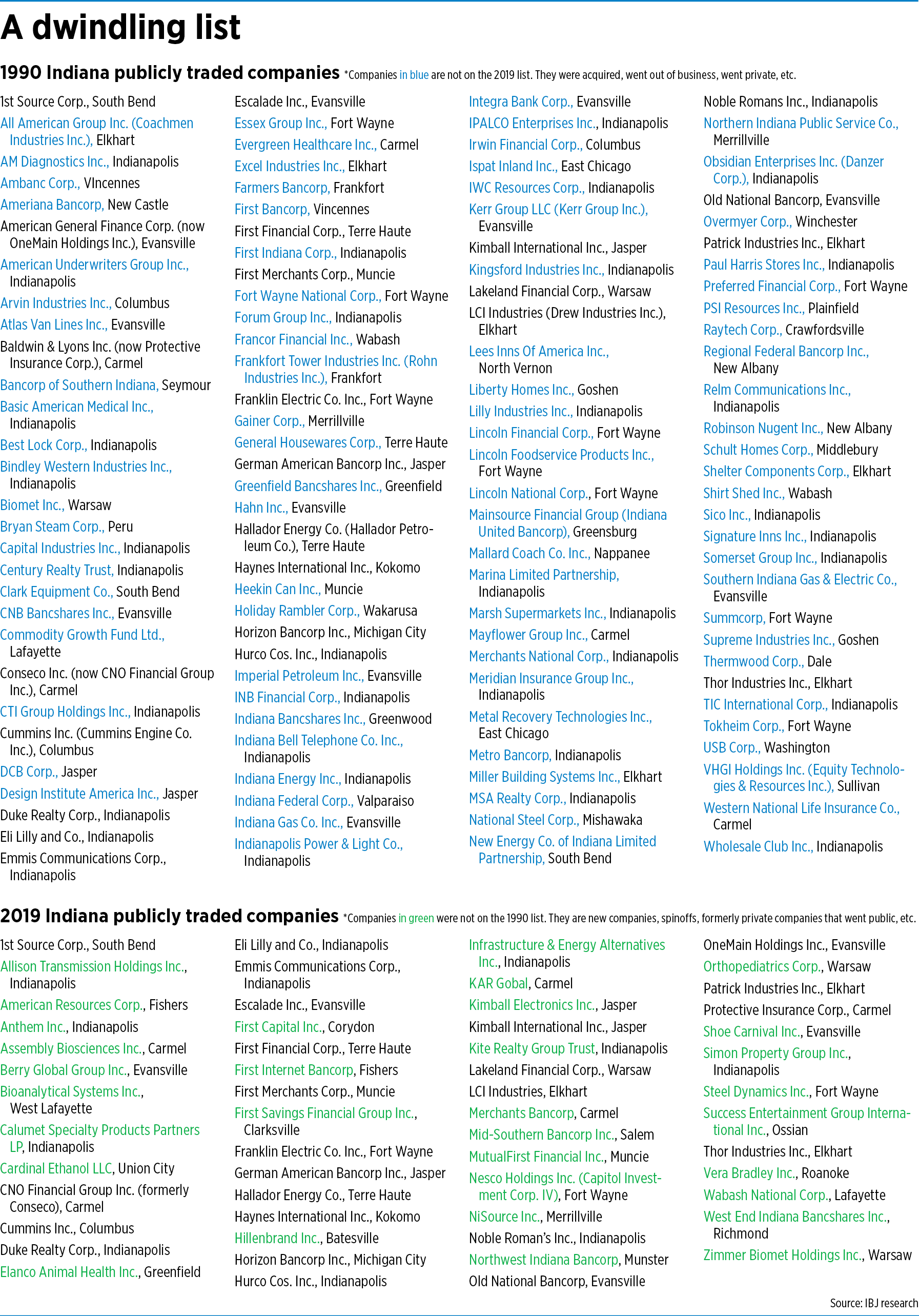 One potential downside, Birge said, is that a city or state with fewer locally based public companies might have a harder time recruiting talent from outside the area.

That’s because public companies tend to generate more name recognition than do their privately held counterparts.

“You can attract talent more easily as a Cummins or an Eli Lilly and Co. than as a really dynamic private company that just doesn’t have a brand that’s as widely known,” Birge said.

And if a local company that might otherwise have gone public is instead acquired by an out-of-town firm, the corporate headquarters becomes a branch office. This often leads to the departure of highly paid local executives.

“Oftentimes, those executives are real leaders in the community,” Birge said.

On the other hand, corporate leaders don’t always leave town following an acquisition, Birge pointed out. As an example, he highlighted Indianapolis-based marketing software firm ExactTarget, which was acquired by San Francisco-based Salesforce.com Inc. in 2013 for $2.5 billion.

“We’ve had many of those [ExactTarget] folks decide to do new, interesting things in Indiana,” Birge said.

And trends in corporate philanthropy mean a company’s headquarters location isn’t as significant as it used to be when it comes to giving.

In years past, Burlingame said, large companies typically made all their charitable giving decisions from their home office, which meant the company’s hometown received the most attention.

More recently, he said, corporations have given leaders of their local operating units more control over giving decisions. That means a company might give less money in its home city or state, Burlingame said, and more in its offices around the United States and overseas.

“Giving has been dispersed among satellites,” he said. “I think it’s a very smart corporate decision.”•