Home » BHI Senior Living on growth tear, even as some of its rivals sputter 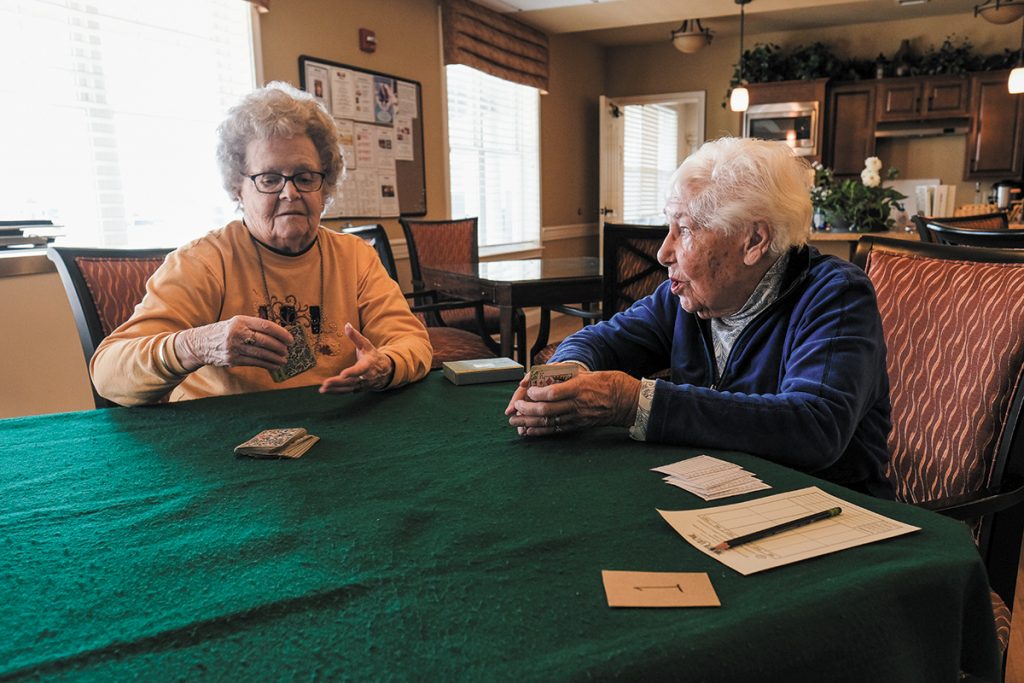 Under a chilly, gray sky at Hoosier Village retirement community in Zionsville, a cement truck rumbled, and construction workers got busy pouring the foundation for an 80-unit assisted-living building—the fifth expansion in seven years at the 300-acre campus. A few hundred yards away, other workers were putting the finishing touches on a new entrance gatehouse.

The retirement community, owned by Zionsville-based BHI Senior Living Inc., is racing against the weather on a $20 million expansion, which it wants to complete by spring 2021.

The entire upscale campus, with about 500 units, is full except for a few units offering skilled nursing and memory care, specialized sectors with higher services and prices.

Overall, Hoosier Village has a waiting list of more than 200, even with entry fees of up to $660,000 and monthly service fees of around $2,000. Demand is highest for independent- and assisted-living units, especially for the spacious duplexes of up to 4,300 square feet, with large kitchens, master bedrooms, sunrooms, full basements and two-car garages.

“Demand is extremely strong,” CEO John Dattilo said. “Really, it’s across the board. … That’s why we did a $100 million bond issue last year so we could expand this campus significantly.”

If that weren’t enough to keep him busy, Dattilo also oversees four other retirement communities, stretching from Fort Wayne to Columbus. And the company recently took over the bankrupt Barrington of Carmel, a luxury retirement community, which it bought out of Chapter 11 this summer for $61 million.

BHI is having a gangbuster year, even as some other retirement communities are struggling or slipping into bankruptcy—pulled down with heavy debt, uneven demand, stiff competition for tenants and a growing shortage of nurses and aides. Across the United States, the occupancy rate for senior housing dropped below 88% last year, the lowest level since 2010, according to the National Investment Center for Seniors Housing and Care, a not-for-profit research organization based in Annapolis, Maryland.

The occupancy rate for assisted living—apartments with central dining rooms, educational activities and recreation programs—was 85%, the lowest since the organization began collecting data in 2005.

In Indiana, the picture is mixed, with “intense competition” in many markets where lots of new capacity has been added in recent years, said Zachary Cattell, president of the Indiana Health Care Association, a nursing home trade group.

“Nearly every city or town of moderate size across the state has a new assisted-living or independent-living community that has opened, is opening, or is under construction,” he said.

Meanwhile, the skilled-nursing segment—housing for patients needing constant attention and care—is struggling with overcapacity, he said, with average occupancies in the low 70% range. The assisted-living and independent-living sectors, which depend predominantly on private pay rather than Medicare or Medicaid, appear to be healthy but competitive, Cattell said.

In the midst of this tough environment, BHI appears to be thriving. The operation had revenue of $51.4 million last year, up 4% from 2017, according to its Form 990 tax return. The not-for-profit ended 2018 with a $2.2 million surplus.

BHI’s chief financial officer, Roger Weideman, said much of the overbuilding was done by the for-profit sector, which overestimated the demand for retirement housing.

“The for-profit sector seems to have jumped the gun a little bit,” he said. “You know, people retire at 65. But they’re not necessarily ready for a product like this until 75, for independent living, or their 80s for assisted living.”

Meanwhile, BHI was growing at a more measured pace, opening new units only when it had pre-sales in hand and a waiting list to count on for future sales. Dattilo credits much of the company’s success to its campus-like settings, with plenty of recreational and educational programs, including arts classes, swimming pools, hiking trails and community centers. Even small touches, like a firepit in a common area on campus, where residents can gather, make a difference.

“A lot of the independent-living and assisted-living properties out there are really just apartment offerings, versus a true campus or wider community offering,” he said. “I do think some of those are struggling because they’re having difficulty trying to present themselves as something unique, as opposed to full-service retirement communities.”

The campus actually began more than a century ago as a church-sponsored orphanage called Crawford Baptist Industrial School, on 185 donated acres in Zionsville. From 1905 to 1951, more than 1,500 children called the complex home. In the early 1950s, as orphanages began phasing out, the complex changed its name to Indiana Baptist Home and began taking in senior citizens. The campus was renamed Hoosier Village in 1952. The headquarters of BHI is on the southern side of the campus, off West 96th Street.

The current expansion is just the latest in a campus building blitz over the past decade. In 2012, the company opened Hickory Hall, a memory support center; along with a wellness center with indoor pool, fitness center, spa and art studio. In 2013, it opened Hawthorn Hall, a three-story assisted-living complex with apartments and restaurants. In 2017, it opened The Oaks, a development featuring 4,000-square-foot duplexes. And earlier this year, it opened Poplar Chase, a complex featuring single-family homes and duplexes.

Altogether, Hoosier Village offers five neighborhoods for independent living, one for assisted living, a memory support center, and a health and rehabilitation center. When the latest expansion is complete, the complex will have close to 600 units. Residents can move from one part of the community to another as their health needs change.

Much of the company’s funding comes from residents’ six-figure entry fees. When a resident moves out or dies, BHI refunds about 80% of the fee. In the meantime, BHI gets to use the money, often for a decade or more, to fund capital projects. Other expenses are funded through the monthly service fees, which can run as high as $2,280.

One on recent day, Dr. Carl Schlageter, 82, a retired physician from Illinois who has lived in Hoosier Village for five years, was walking briskly on a treadmill inside the community center. He said he moved to Indiana to be closer to daughters in Carmel and Zionsville.

“This place is pristine,” he said, waving his arm around. “Everything is maintained great. It’s impeccable.” 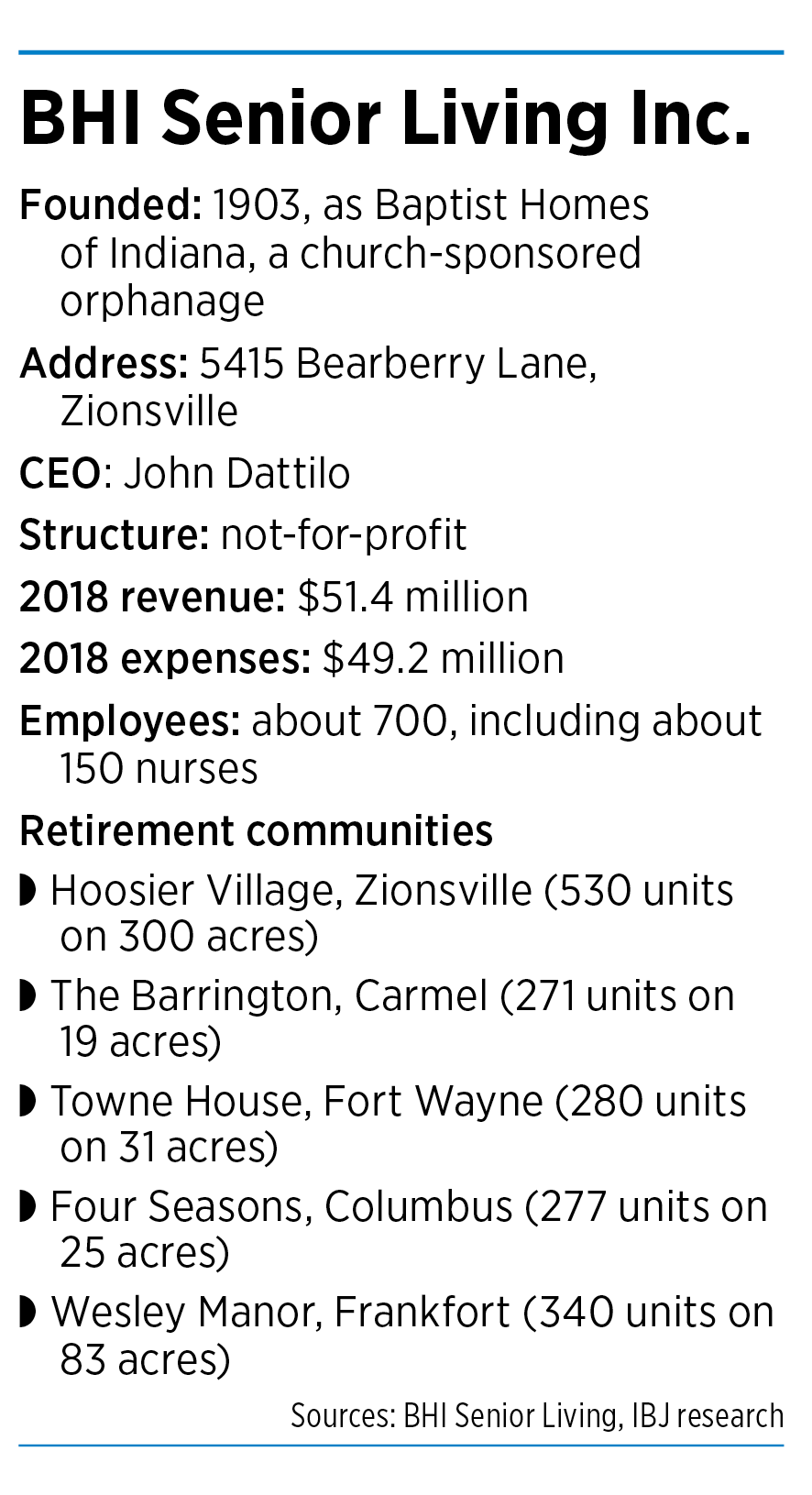 In the wider industry, things are not so great. In the past year, several large retirement projects have gone bankrupt, including communities in Oklahoma, Texas and Illinois. Just last month, a 238-unit community in Fort Worth, Texas, called The Stayton at Museum Way defaulted on $109 million in bonds. The owner, Lifespace Communities Inc., based in West Des Moines, Iowa, blamed construction problems, poor sales and high competition.

But bankruptcy for one owner sometimes spells opportunity for another. The Barrington, in Carmel, began hemorrhaging money soon after opening in 2013. The upscale complex, built for $142 million, included a fitness center, library, salon, spa, art studio and underground parking. But owner Mayflower Communities, an affiliate of Dallas-based Senior Quality Lifestyles Corp., struggled to meet debt payments, and by December 2018, began defaulting on bonds. A month later, facing foreclosure and receivership, it declared bankruptcy.

Residents at The Barrington were stunned to find out they might not get back their six-figure entry fees because they were considered unsecured creditors. Court records showed an unspecified number of residents in the 271-unit complex were owed a total of $52 million.

BHI officials sensed an opportunity. For years, they had looked for a way to enter Hamilton County, the wealthiest county in Indiana. As far back as 2006, they drew up plans to create a campus called Prairie Landing just west of Conner Prairie, a living history museum in Fishers. BHI began talking to developers, designed a campus and roughed out a marketing plan, offering units in a pre-sale program.

“Then the bottom fell out of the economy in 2008,” said Dattilo, who at the time was BHI’s vice president of operations. “What started out as probably the two best months of pre-sales that our development company ever had for a new retirement community turned into a trickle.”

BHI missed its sales targets, getting deals for only about 50 of the 300 planned units, far short of the 70% it had hoped to have in hand before beginning construction. So it scrapped the project.

Yet it was still interested in Hamilton County. So when The Barrington went bankrupt a few years later, BHI was ready to pounce.

“We were contacted by some bankers who had become aware that [Mayflower] was violating their bond covenants, and knew that we might have some interest,” Dattilo said. “So we reached out to the third party that was handling the bankruptcy and let them know we certainly were interested.”

A bankruptcy judge in Texas approved the sale to BHI in July. To the relief of residents, the new owner said it would honor their contracts, including the refundable entry fees, which it said it was able to do after restructuring the debt and retiring the original bonds.

BHI, which took possession of The Barrington a few months ago, said it has eliminated a “small handful” of jobs and reduced other expenses, such as a wellness initiative that few residents were using.

With that acquisition under its belt, BHI isn’t resting. The company said the retirement housing market is undergoing consolidation, and it is actively exploring other properties in Indiana—including in Lafayette and Bloomington—as well as nearby states.

It has five retirement communities in Indiana, but nothing outside the state. Dattilo declined to say what properties or companies he is targeting.

“Those can be very delicate discussions internally for those organizations,” he said. “You know, they have residents that live in those communities and they have board members who are going to want to keep that information very close to the vest. I don’t really want to say much more than that.”•