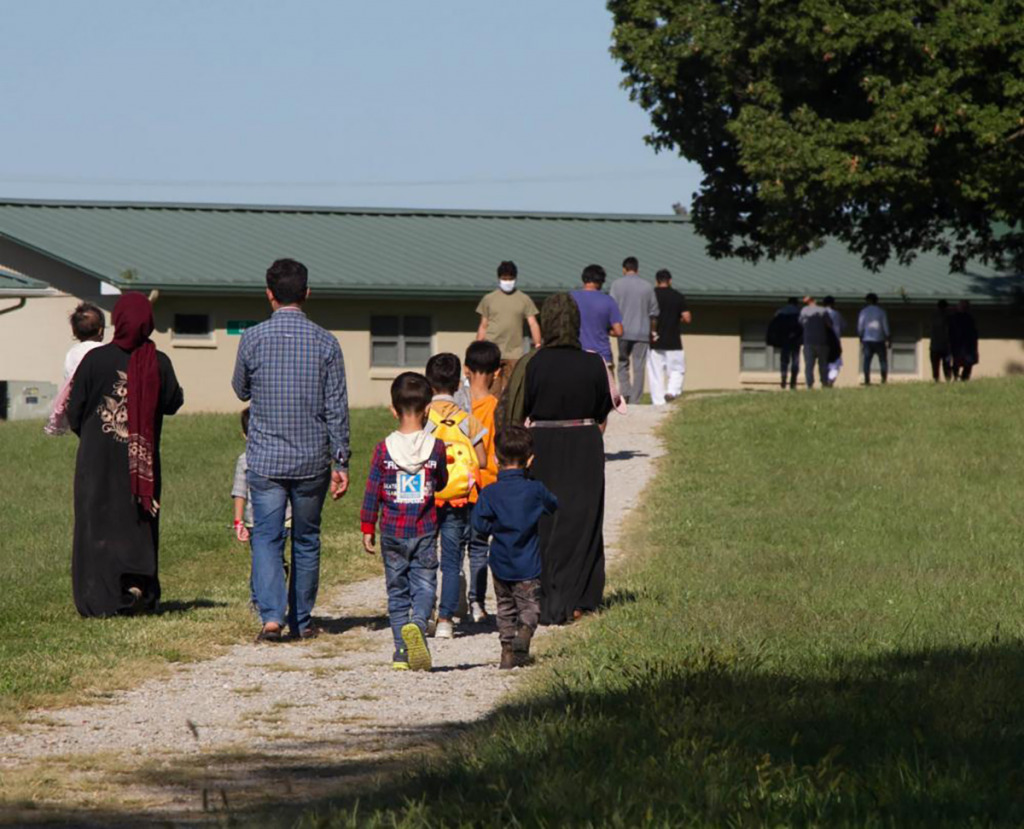 Afghan evacuees walk along a trail at the Indiana National Guard’s Camp Atterbury, where 6,600 refugees are being temporarily housed as they await clearance for resettlement in the United States. (U.S. Army photo/Sgt. Dylan Bailey)

Federal officials said Tuesday that they’ve delayed their timeline to resettle roughly 4,100 Afghan refugees who are still at the Indiana National Guard’s Camp Atterbury training post more than two months after they arrived there.

Limited resettlement agency resources and the coronavirus pandemic have delayed resettlement efforts, Aaron Batt, Department of Homeland Security coordinator for Operation Allies Welcome, said during a news conference. Officials previously said their goal was for refugees to be permanently resettled by early November.

The new goal is for all remaining refugees to receive resettlement assignments by the end of the year, although Batt said the holiday season and winter weather events could delay the time to early 2022.

Camp Atterbury, about 25 miles south of Indianapolis, is one of eight sites in the U.S. that the Department of Defense is using for Afghan special immigrant visa applicants, their families, and other Afghan personnel.

Of the 7,200 refugees who have arrived at Camp Atterbury since Sept. 1, about 3,100 have completed their health and safety screenings and left the base. The evacuees must be vaccinated against measles, COVID-19, and other diseases before they can leave the temporary housing site.

So far, about 250 Afghans have resettled in Indiana, Batt said. Indiana was previously projected to take 490, but officials said Tuesday that the state has since committed to accepting 719 refugees. They could be processed at any of the eight temporary housing sites.

No additional evacuees are expected to arrive at the Indiana camp, Batt added.

Exodus Refugee Immigration, an Indianapolis agency, has helped dozens of Afghan families resettle in the state in the last two months, said executive director Cole Varga. While many refugees have been placed in the Indianapolis area, others have or will receive housing assignments in Bloomington, Fort Wayne, Muncie, South Bend, Evansville, Terre Haute, Hammond and elsewhere.

“There’s so much pride and passion … and a reminder that all of our purpose while we’re here is to help them, to help our neighbors. As far away from where they come from, they’re here at home in Indiana and in this country,” Republican Gov. Eric Holcomb said Tuesday.

Indiana Department of Workforce Development commissioner Fred Payne said the state agency is also helping refugees resettling in Indiana to find jobs. More than 150 employers in Indiana have told the agency that a collective 4,000 job openings and available to refugees, Payne said.

“We’re now doing anything from hosting virtual job fairs and making introductions to training and skilling people up for the specific roles that the employers have available to them,” Payne said. “We’re really trying to ensure that we’re doing every single thing that we can to set the people and their employers up for success.”

Some Afghans have prior education or training already and are being paired with employers based on those skillsets, Payne said. Other refugees are being offered various job training to prepare them for available openings in the state’s workforce.

Varga said Amazon and Walmart have offered “numerous” jobs to some of the refugees being assisted by the resettlement agency.

Officials said an outpouring of donated goods such as food, clothing and toys has been critical to helping the refugees acclimate. Indiana National Guard officials noted that almost 75% of all items that have been donated to the eight temporary housing sites originated from Camp Atterbury.

Hoosiers can still donate needed items to the Camp Atterbury refugees through a regional collection system.

Closes-toed shoes in all sizes, men’s pants, bras, bottle brushes and fingernail clippers are the most needed, according to the Indiana Department of Homeland Security. New items in original packaging will be accepted Monday through Friday from 8 a.m. to 4 p.m. at the nine Indiana National Guard armories across the state.