A proposed housing project in Carmel has neighbors and some city officials concerned about traffic. 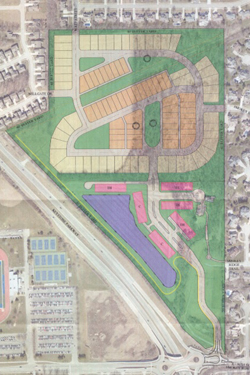 Old Town has asked the city to rezone the 59 acres from the R-1 residential zoning designation to a planned unit development to accommodate the development. The property is mostly vacant, except for a house that was originally built as a two-story log cabin in 1834. It will be preserved as a community gathering place as part of the development plan.

Old Town originally proposed building 240 units, but the developer scaled that back to 200 during negotiations with the plan commission after neighbors complained that the development was too dense.

The developer also agreed to build a roundabout at the entrance to the subdivision to address traffic concerns neighbors and city officials have. Old Town is working with A&F Engineering to design an intersection that has the least impact on 136th and Keystone.

Justin Moffett of Old Town told city councilors during a meeting earlier this month his team has been working with neighbors for more than a year to try to address concerns. But residents living near the site remain concerned that adding 200 residences will result in a heavy increase in traffic at the 136th Street and Keystone Parkway roundabout. The site is directly east of the roundabout.

In letters to city officials and during public testimony, several residents said the intersection gets backed up during peak morning and evening rush hour. The issue is also compounded by traffic generated by Carmel High School, which is south of the development site.

“If you’ve driven through this area, the intersection is already overburdened,” Michelle Krcmery, a Smoky Ridge resident, said during the council meeting.

Matt Brown of A&F told the council the development won’t be a big traffic creator, but his team is studying ways to mitigate traffic concerns.

The Carmel City Council sent the issue to its Land Use committee to be discussed further after some councilors said they wanted more information on the impact the new subdivision would have on traffic. A meeting has yet to be set.

The Old Town proposal is the second controversial one to go before Carmel officials in the last year. Beazer Homes of Indiana LLP filed plans last year to build a 157-home age-restricted community called the Reserve at Cool Creek but withdrew the proposal in early 2018 after the project received negative feedback.