IBJ learned Friday that the same show, being revived in October, will also be her last. On Sept. 15, Harris, DK’s senior dancer, will announce her retirement.

A Butler University graduate, Harris, 37, trained at Dance Magic Performing Arts School and attended Interlochen Arts Academy. After appearing in DK’s “Carmina Burana,” she joined Charleston Ballet Theatre but returned to DK after two years. Since then, she has appeared in nearly 400 performances with the company. 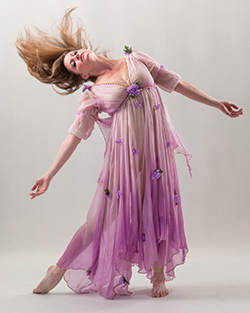 “This will be my sixth time dancing Carmina Burana and my last,” said Harris. “It is coming full circle—I get to say goodbye with the same passion that brought me into this world.”

DK Artistic Director David Hochoy, who hired Harris, added. “She has been my muse for many a creation and has been a catalyst for the necessary artistic creative synergy in the studio between choreographer and dancer."

Thanks in part to a Lily Endowment grant, Harris will stay with DK as Rehearsal Director. She also will continue to teach at Premiere Dance Center in Muncie and Performer’s Edge Dance Theatre in Carmel.