For “The Next Wave” (through May 17), Dance Kaleidoscope moved to the work of four choreographers, each with a unique vision. The result: A diverse evening that not only—as the title suggests—pointed toward the future, but brought pleasure to the now.

Lucy Bowen McCauley’s “Tableaux de Provence,” set to the alto-sax-dominate music of Paule Maurice, didn’t exactly evoke thoughts of France (admittedly, I’ve never been). But it did kick the program off with soothing elegance. 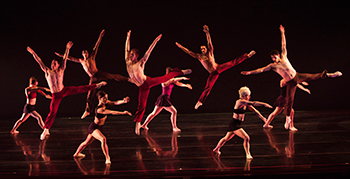 The second piece, Stephanie Martinez’ “Taking Watch,” took a bolder approach, opening with a line of dancers seated, watching another. Judges? A wall?  The tension was palpable until she broke through, scattering the dancers, whose varying energies somehow added up to a single, exciting image. The breaking out and reincorporating of the dancers into the whole made for a strong showcase for individuals as well as a reminder of how well the DK tribe works together. At the same time, perhaps, it offered a visual metaphor for the individual’s role in society. (In non-narrative dance, I'm always cautious about imposing specific meaning on what works best as a wordless experience.)

The second act started with a wallop: Brock Clawson’s world premiere “Lake Effect Snow,” featuring a dramatic lighting design by Laura E. Glover. Between sharp blackouts, circles of light illustrated a couple on a bench, a swimmer, and a group of dancers. From those basic forms erupted a sometimes creepy, often beautiful, occasionally casually violent, always searching series of movements seemingly on land and in the water. Does it take place over a summer? A moment? A lifetime? I immediately wanted to see this visual knockout again.

Instead, the evening rounded out with another world premiere, Kiesha Lalama’s “Catapult.” With a name like that, one would have a right to expect high-flying excitement. Instead, Lalama offered a springy, wind-blown piece that sometimes bordered on line dancing in some sort of magical nightclub. That’s not to disparage the fun piece, which channeled a different kind of energy than I’m used to seeing in DK. That's certainly one of the benefits—for both audiences and, I would imagine, dancers—of accenting the accomplished, ongoing work of DK Artistic Director David Hochoy with the talents of outside choreographers.