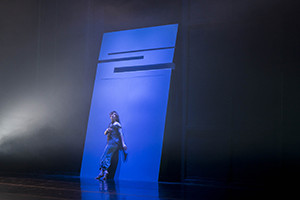 A common mistake in the non-representational arts is trying to figure out what a work conclusively “means.”

While that may seem the obvious course to travel when one is confronted with the cryptic, it’s not usually a wise way to go, particularly when it comes to contemporary dance. Sure, “So You Think You Can Dance?” and other televised contests showcase a certain “gettable” style of athletic performance, but that’s not the only approach, as clearly demonstrated in “Mapping the Aether,” performed Jan. 21 and 23 at the Indianapolis Museum of Art.

The concluding piece, Nugent and Lappas’ own “Mapping the Aether,” not only offered striking use of a video “doorway,” but creatively placed the dancers in relation to it. I’m not certain that the use of recited text (including a bit of Gertrude Stein) brought anything to the table—and the piece meandered a bit with some bold ideas hinted at rather than clearly explored—but it capped an evening that certainly put Nugent Dance on the map as a new—more accurately, relocated—company to watch.

The last David Hare play I saw here in Indianapolis was “Stuff Happens” back in the 2007/8 season at the Phoenix Theatre. I’m not sure if any have been any attempts to tackle the work of one of England’s leading contemporary playwrights. between then and the current production of Hare’s “Skylight” at Theatre on the Square (through Feb. 13).

On the surface, the two are wildly different. “Stuff Happens” is a large-cast docu-play recounting the machinations that led to the 2003 Iraq War. “Skylight” is an intimate play about two former lovers reconnecting. But both share a sharp grasp of how the political can shape the person and vice versa.

In “Skylight,” Kyra (Sarah McGee) is a school teacher in an underprivileged neighborhood. On a cold winter night, she receives a visit from former lover Tom (Bill Simmons), a successful restaurant owner, now widowed.

Kyra used to work for Tom’s company and was close friends with his wife and kids. For six years, Kyra and Tom managed to keep their affair a secret, but when the truth was discovered, Kyra quickly left with barely a word. Now, years later, Tom drops in and it’s no surprise that the two are heading into another romantic collision (Although his chauffeur remains outside).

The first act seems relatively free of obstacles. Sure, the two come from different political perspectives. Tom is a bombastic capitalist and Kyra cautious and a bit stoic, living an isolated semi-boho life more by choice than necessity. We’re told there’s a 20 year age gap between them, which seems a non-issue given the combination of Simmons’ vitality and McGee’s old-soul maturity (of course, that could be my jaundiced perspective as a man of Tom’s age). None of these seem reason for the two not to get together.

The second act ups the ante but I never felt fully invested in the outcome. I did, however, experience something close to as satisfying—the presence of two very specific human beings (three if you count Tyler Ostrander as Tom’s son, Edward, in a pair of shorter scenes) truthfully wrestling with their politics and their ideas of morality.

In the Central Indiana theatrical firmament, Theatre on the Square is lumped into the awkwardly defined group of “professionally managed theaters”—not a community theater (not that there’s anything inherently wrong with these purely volunteer entities) and not fully professional (as a rule, the actors are not paid). For this production, though, TOTS is working with an Equity contract which not only allows one of the region's finest actors to work on its stage, but also speaks promisingly for a future where other professionals can return to the stage where many of them got early breaks.