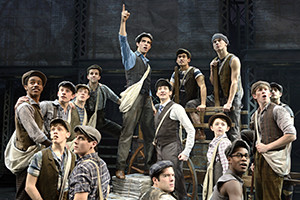 Usually I’m glad when a show that comes through town as part of the Broadway in Indianapolis season is a Actors' Equity Association production.

With “Newsies” (at Clowes Hall through March 20), I can’t imagine it any other way.

In part, that’s because the level of dance required in “Newsies” demands the kind of experience and rehearsal time that you are unlikely to find with a non-Equity tour.

More obviously, though, a non-union production of “Newsies” would be hypocritical. This is, after all, a musical that celebrates a group of lower-class New York newsboys (OK, newsteens and beyond) who organize themselves to strike against the unfair labor practices of newspaper owner Joseph Pulitzer (yes, that Pulitzer).

The musical is based on the 1992 Disney live-action flop that eventually grew a cult following and sparked bootleg theater productions. The Disney folks, not being stupid, decided to create an official production in hopes that schools, camps, and community theaters would license it and create another, probably minor, cash cow.

Surprise! The initial professional production of "Newsies" at New Jersey’s Paper Mill Playhouse proved a critical and box office hit, prompting a transfer to Broadway for a healthy run.

There’s no compromise taken in the tour, which features a large cast executing the highly-athletic-but-a-bit-redundant Christopher Gattelli choreography. (The show has more cartwheels than a Conner Prairie buggy maker.) It’s got the strong Alan Menken/Jack Feldman songs from the movie and some lesser ones—including a generic romantic duet—added to flesh things out. And as its hero, Jack, the tour has a charismatic lead in Joey Barreiro, who comes across as more “Outsiders”-era Matt Dillon and less the movie’s Christian Bale.

The show does add a romantic interest for Jack, spunky reporter Katherine, played confidently on opening night by understudy Kaitlyn Frank, usually found in the ensemble. Zachary Sayle also makes an impression as Crutchie the, well, you can guess. Less effective is an effort to do for Teddy Roosevelt what “Annie” does for Franklin Roosevelt, although Kevin Carolan is game in the underwritten part.

Like the movie, the theatrical "Newsies" is more fun and engaging in the build up then it is with the payoff. Organizing, protesting, and fighting is more theatrical than negotiation, and even with this substantial cast, the stage can’t even hint at the power of kids from all over New York organizing to speak truth to power. The best songs are front loaded, particularly the plaintive "Santa Fe" and the rousing "Seize the Day."

But rest assured, the team behind "Newsies," like those behind many shows these days, knows that even if your show fizzles at its end, you can always pull out a rousing curtain-call reprise.