This week includes the first Friday of April, which of course means gallery hopping. But there's more going on around town as well. Here are some viable options. 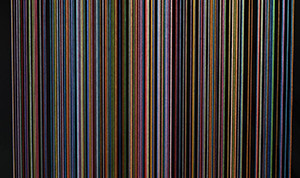 Openings for this month’s downtown gallery hop include “The Modern Alchemists: New Visions by Artists Emma Overman, Johnny McKee and John Klinkose” at Indiana Landmarks Center; “Sweet Spot” at Gallery 924 featuring about 3,700 ceiling-to-floor nylon cords; paintings and works on paper by Amy Pleasant at iMOCA at the Alexander; and “Color Meditations” by James Wille Faust at iMOCA Fountain Square.

"Everything in Its Place: The Life and Slimes of Marc Summers”

The former Nickelodeon “Double Dare” and Food Network “Unwrapped” host—and Indianapolis native—stars in a one-man show about his life, including his struggle with OCD.

Mark Morris Dance Group hits the stage at the Elliott Hall of Music at Purdue University in West Lafayette April 2.

Finally, I'll be hosting a trivia contest on April 1at the annual, free Who's Yer Con gaming convention at the Wyndham Indianapolis West.