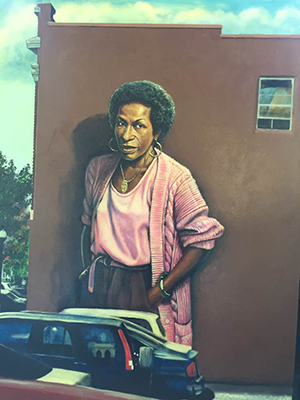 —Kurt Vonnegut will soon have company–at least on Mass Ave. A mural honoring Indianapolis-based poet Mari Evans should be completed by mid-August, taking over the north side of the Davalan/Hoosier Building at 448 Massachusetts Ave. Funded by a grant from the Indiana Arts Commission as part of the Indiana Bicentennial Celebration—with support of the Efroymson Family Fund—the artwork is being created by Michael Jordan, aka Alkemi. It's a project championed by Big Car Collaborative chief curator Shauta Marsh in part to increase the visibility of the poet and her work.

—Indy Jazz Fest has announced its 2016 lineup, which is dedicated to the memory of Indianapolis jazz legend Wes Montgomery. Programming includes a Bill Lancton-led tribute to The Indianapolis Sound at the Christel DeHaan Fine Arts Center, a Remembering Wes Celebration at IUPUI, a block party outside the Jazz Kitchen, and a Speedway concert at Dellara Indy Car Factory. Headliners at various locations include Norman Brown, the Ravi Coltrane Quartet, the Sullivan Fortner Trio, and Dominican fusion band Yasser Tejeda & Palotre.

—The Indianapolis Symphony Orchestra will be offering a trio of live-accompanied Harry Potter film screenings scattered throughout the 2016/17 season. They begin with "Harry Potter and the Sorcerer's Stone" Sept 23 and 25.

—The Indianapolis Museum of art has added Shelley M. Selim to its curatorial lineup. The new associate curator of design and decorative arts comes to the IMA from the Cranbrook Art Museum in Bloomfield Hills, MI.

—Indy native Jim Housefield's new book "Playing with Earth and Sky: Astronomy, Geography, and the Art of Marcel Duchamp (Dartmouth College Press" will be released July 21 with a celebration at the Indianapolis Art Center.